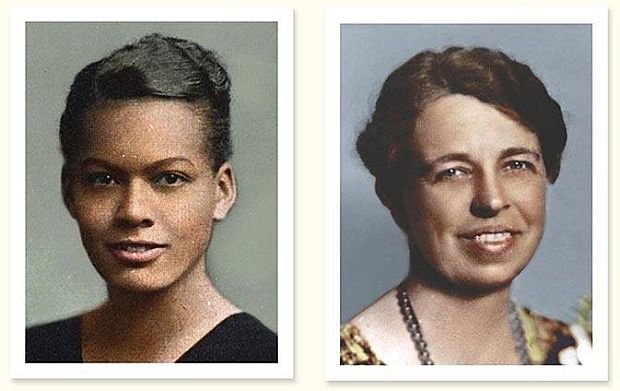 Reading The Firebrand and the First Lady: Portrait of a Friendship, I noted that although it covers much of the same material and sources as Ken Burns' The Roosevelts, Patricia Bell-Scott offers a new angle and brings Eleanor Roosevelt into sharper focus with a fuller, more rounded portrait, rendering her a more complex individual than served up in the documentary television series. She continued to encourage her husband to live up to his promises and professed ideals but what is different about The Firebrand is that she in turn was challenged by Pauli Murray (1910-85), an African-American socialist activist, lawyer, poet and first African-American female Episcopal priest.

The unlikely friendship between ER and Murray began in 1938 when the latter sent an impassioned letter to the President that caught the attention of his wife. Murray had been denied admission to the University of North Carolina because of her race and she was rightfully outraged, considering that FDR had just visited the university and praised it for its social progress. Her plaintive plea: “We cannot endure these conditions. Our whole being cries out against inequality and injustice” prompted the first lady to offer a glimmer of support: “The South is changing, but don’t push too fast. There is a great change in youth, for instance, and this is a hopeful sign,” an exchange that captures the dynamic and tone for much of their correspondence that was to continue for decades until ER’s death in 1962.

Originally appearing in Critics at Large, I am reproducing it here because of interest in personalities that have exhibited courage in the last century.


Since Ken Burns adapted David McCullough's book, The Great Bridge, about the construction of the Brooklyn Bridge, to an Academy Award winning Brooklyn Bridge (1981), he has produced and directed numerous masterful feature length documentaries for PBS. His signature trademarks are a combination of still photos, archival film footage, unseen actors reading the words of historical characters, apt American music and an array of historians, journalists and (if possible) surviving contemporaries who offer compelling anecdotes and insights into the era, an issue and the characters. Burns avoids dramatic re-enactments. His oeuvre includes The Statue of Liberty (1985), the iconic The Civil War (1990), Baseball (1994), The West (1996), Lewis & Clark (1997),Not for Ourselves Alone: The Story of Elizabeth Cady Stanton and Susan B. Anthony (1999), Jazz (2001),The War (2007), The National Parks (2009), Prohibition (2011), The Dust Bowl (2012), The Central Park Five (2013). Most recently PBS has aired Cancer: The Emperor of All Maladies (2015), a six-hour treatment of Indian-American physician Siddhartha Mukherjee’s Pulitzer prize-winning biography of cancer, the one film Burns did not direct because he was so personally connected to the subject: his mother died of cancer when he was a young boy. In 2016, he returned to directing and producing the thrilling Jackie Robinson that excelled in weaving together sport, politics and race.

It is, however, Burns’ 2014 mammoth seven-part, fourteen-hour The Roosevelts: An Intimate History, on the private and public lives of Theodore, Franklin and Eleanor Roosevelt, that is the one I will be discussing today –  focusing mostly on the second generation of Roosevelts. As with many of the films cited above, Burns collaborated with biographer and historian Geoffrey C. Ward, who wrote the elegant and accessible script and is one of the historians – along with Doris Kearns Goodwin, David McCullough, Jon Meacham and journalist George Will – who offers trenchant insights. Actor Peter Coyote won an Emmy award for his compelling narration. The stellar cast of actors’ voices include Meryl Streep for Eleanor Roosevelt, Paul Giamatti for Teddy Roosevelt, and Edward Herrmann for FDR, an astute choice since he persuasively played the role in the television series Eleanor and Franklin (1976) and Eleanor and Franklin: The White House Years (1977).

Nothing Any Longer is Forbidden: Nazi-Occupied France on Stage, Small Screen, and Page

This essay was originally posted on Critics at Large and is reproduced on this site because of the demonstration of courage in the face of terrible adversity by characters in the drama, television series and novel that I  review.


Part of knowing who we are is knowing we are not someone else. And Jew is only that name we give to that stranger, that agency we cannot feel. Each man has his own Jew, it is the other. And the Jews have their own Jews.

As the lights go down, we hear the ominous sound of a train, chilling because the setting is 1942 in France.Incident at Vichy then opens with a daily occurrence: the systematic rounding up of suspected Jews by the Vichy government as it submitted to German racial laws. On this particular day, a number of men and a teenage boy have been shuttled into a ramshackle detention centre and lined up on a bench, none of them certain why, initially thinking that perhaps the authorities are interested only in checking their papers. But as they get called in one-by-one for questioning (off stage), they begin suspecting more sinister motives – there is talk about trains locked from the outside and rumours about work camps – while at the same time they protect themselves with self-delusions that freedom will come, particularly after the first man called in, the businessman is given a pass to leave. Of course the audience knows precisely the reason: most of them are Jews and the Nazis' purpose is to identify individuals who belong to their designated “inferior races” so that they can be dispatched by train east to Poland. The discrepancy between the audience’s knowledge and the uncertainty of the characters contributes to the tension (for some audience members at the Toronto Soulpepper performance I attended that tension was clearly unbearable expressed through fidgeting, movement as if to leave but decide to stay, almost a mirror of what was happening on stage) that Arthur Miller’s ninety-minute one act 1964 drama is designed to generate.