Humanity Challenged : Week One: Cruelty and its Alternatives

For the next eight weeks, I will be providing on this website a weekly overview of the course, "Humanity Challenged" that is being offered by the Life Institute at Ryerson University.

"Evil is socially enacted and constructed. It does not reside in our genes or our soul, but in the way we relate to other people."
—Roy F. Baumeister, Evil" Inside Human Cruelty and Violence

"The normal process of life contains moments...in which radical evil gets its innings and takes a solid turn....Disenchantment with ordinary life [follows] and...the whole range of habitual values...come to appear ghastly mockery."
—William James, The Varieties of Religious Experience

"While the evil of genocide and mass killing is not ordinary, the perpetrators most certainly are."
—James Waller, Becoming Evil

" The unsettling truth is that any deed that perpetrators of genocide and mass killing have ever done, however atrocious, is possible for any of us to do—under particular situational pressures."
—James Waller, Becoming Evil

As a starting point, I will briefly discuss the experiment conducted by Philip Zimbardo that he outlines in his 2007 book, The Lucifer Effect: How Good People Turn Evil and that will be followed up by a clip of the German film, Das Experiment, that is loosely based on that study.


The philosopher, Philip Hallie (1922-1994), one of the speakers of a conference on human evil in Bill Moyers' 1988 Special, Facing Evil, wrestles with the conflict  between what he calls "decent killers" which includes himself as a veteran of World War Two, and true pacifists as exemplified the remarkable couple André and Magda Trocmé. After writing a book on human cruelty that plunged him into despair, Hallie published in 1979 Lest Innocent Blood Be Shed: The Story of the Village of Le Chambon and How Goodness Happened There, an ethical inquiry into the beliefs and activities of the Trocmé couple. During the war, they became very involved in a wide network organizing the rescue of Jews fleeing the deportation efforts of the Nazi implementation of their Final Solution. After the establishment of the Vichy France regime, Trocmé became a catalyst whose efforts led to Le Chambon, a Protestant village in Catholic France, becoming a unique haven in Nazi-occupied France. Trocmé and other area ministers serving other parishes encouraged their congregations to shelter "the people of the Bible." Trocmé and his church members helped their town develop ways of resisting the dominant evil they faced. Together they established a number of "safe houses" where Jewish and other refugees seeking to escape the Nazis could hide.

“We cannot erase every trace of evil from the world, and small groups of killers have the capacity to do great harm.”
—President Obama 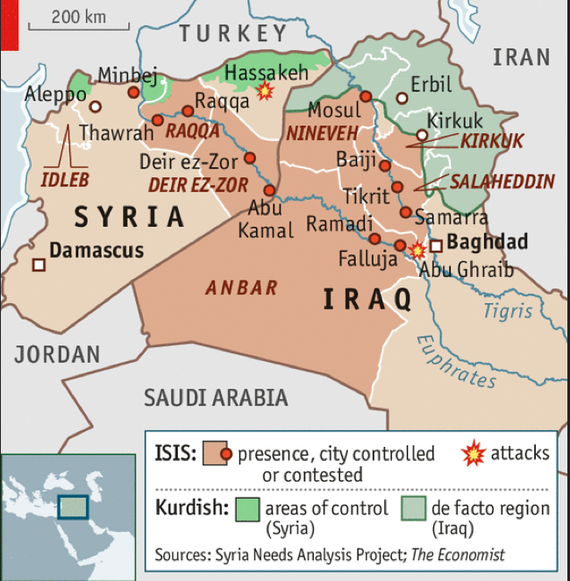 For six years of his presidency, Barack Obama was committed to extricating America from its wars in Iraq and Afghanistan. He was opposed to the Iraq war from the beginning and campaigned against in 2008. Even when he agreed five years ago to a “surge” of sending thirty thousand extra troops to Afghanistan, it was clear from the outset that he did it with misgivings since he put a timeline on the American presence there. Philosophically and temperamentally, Obama was opposed to committing America to any foreign military engagement that might lead to putting troops on the ground unless there was an immediate threat to American security or a humanitarian mission to prevent genocide. His cautious—not to be confused with weakness—foreign policy was primarily limited to the use of ordering drones to kill suspected terrorists and SEAL operations that led to the killing of Osama bin Laden. But sometimes the unanticipated arises. When former British Prime Minister, Harold Macmillan, was once asked what the most difficult thing about his job, his now famous reply was "Events, dear boy, events." Tumultuous events that have been occurring in the Middle East have made Obama’s Presidency fraught with anxiety. How he responds to them could become the defining issue of his presidency, and not what he had hoped would be his legacy.


ISIS, now called the Islamic State (IS), has cut through a wide swath of Iraq and Syria. Abu-Bakr el-Baghdadi followers have redrawn the territorial map of the region for the first time since the foreign ministers of England and France secretly rearranged the old Ottoman Empire almost hundred years ago. By absorbing a third of Syria and a quarter of Iraq, including Mosul, Iraq’s second largest city, IS has created not only a fanatical Sunni regime, but also a caliphate, which was the original Muslim kingdom that existed under the successors of the Prophet Mohammed; at one point, it extended from modern-day Spain to Central Asia. Baghdadi has donned the mantle of Caliph (successor) and has declared himself the chief imam and political and military leader of all Muslims. His battle-hardened, financially wealthy organization—largely derived from theft, extortion, and the sale of oil, antiquities and slaves—has demonstrated and visually recorded for the world a capacity for brutality—the so-called “propaganda of the deed”—that has appalled the international community and won them new recruits. According to the CIA, the size of the militant group has at least doubled over the summer from roughly 10,000 to between 20,000 and 31,500 fighters, likely motivated by the glamour and successes that IS have achieved. IS also for the time being has the support of former Baathists and Sunni clans in Iraq that were strongly opposed to Nouri al-Maliki's government in Baghdad that excluded them from military and intelligence positions, and viciously persecuted Sunnis.
Read more »
Posted by Robert A. Douglas at 11:24 1 comment:

Sober Realism: A Most Wanted Man—From Novel to Film

This review originally appeared in Critics at Large August 31, 2014. I have included it on this website because the war on terror is pivotal to my chapters on contemporary America in That Line of Darkness: The Gothic from Lenin to bin Laden (Encompass Editions, 2013).


Forget blackmail, I said. Forget the macho. Forget sleep deprivation, locking people in boxes, simulated executions and other enhancements. The best agents, snitches, joes, informants or whatever you want to call them, I pontificated, needed patience, understanding and loving care.

—John le Carré, speaking to cast members of the film adaptation on the art of spycraft.


In John Le Carré’s 2008 novel, A Most Wanted Man, which addresses the war on terror and its attendant abuses, Gunther Bachmann, head of a semi-official, Hamburg-based anti-terrorism unit, has been whisked home after suffering a debacle in Beirut that still weighs heavily upon him. Hamburg, home to a large Islamic community and the city that played host to at least six of the 9/11 conspirators, is ten years later a source of angst and embarrassment to German and American intelligence officers. Given their failure to derail that catastrophic attack they are scrambling to disrupt any further terrorist operations. But their methods differ: Bachmann believes that rendition, waterboarding and extrajudicial killings should be jettisoned in favour of relentless surveillance, recruiting and running secret agents to ensure that the suspected targets are actually guilty—a process that takes time and patience. He might be described as a cynical idealist, a post–Cold War, post–9/11 George Smiley figure who understands that espionage often consists of performing the diligent, unheroic and often entirely pointless work of covert politics. His impatient German rivals and superiors, and their counterparts in the American and British secret services prefer to snatch-and-jail every low-level operative rather than wait-and-see in order to uncover a network of jihadists.