In the coda of That Line of Darkness: The Shadow of Dracula and the Great War (Encompass Editions, 2012) I wrote briefly about the film Children of Men. I expand upon it in the following blog connecting the film to the treatment of prisoners-of-war and suspected spies held in the UK during World War Two. The torture of suspected spies is uncannily similar to that of  alleged terrorists after 9/11 in Chapter 19 of the second volume of That Line of Darkness: The Gothic from Lenin to bin Laden (Encompass Editions, 2013).

The panic following the fall of France and the invasion scare in May/June 1940 led to a mass round-up of most Germans in Britain, pro and anti-Nazi alike. Unsubstantiated rumours circulated of a Fifth Column, an alliance between pro-Nazi sympathizers and aliens, that could destabilize the war effort. According to the cabinet minutes record, Churchill issued the order: "Collar the Lot." As a result,  over 27,000 German Nationals in the British Isles were interned with public support. It turned out that there was no Fifth Column.

Among  the German Nationals were Jewish refugees, survivors of the Nazi camps who found that arrival in Britain could replicate their terrible experience. The squalor and the starvation diet in the cramped camps were appalling. But the deportation of thousands, the installation of Jews and overt Nazi sympathizers in the same camps, and the dehumanizing language of the commandants that echoed what they heard in Nazi camps broke the spirit of many Jews; a number of them committed suicide. Gothic tropes can be found in the recollections of survivors. One describes fellow inmates with “yellow faces, more death’s heads than faces; another describes them as moving and talking “in an atmosphere of haunted unreality [in which] vision and sound were distorted.”

One might ask whether these reminiscences were representative of the treatment accorded to German POWs. Most accounts suggest that they were treated respectfully according to the rules of the Geneva Convention not so much because of a national conscience  but because of the fear of German reprisals against British prisoners held in German camps. Indeed, there is evidence that the British government through third parties were negotiating with the Reich government to ensure that British soldiers were treated well. Compared with how other foreign nationals, especially Russians soldiers, British POWs were much better off. Yet there is countervailing evidence ( Ian Cobain, Cruel Britannia: A Secret History of Torture, Portobello Books, 2012) that Nazi sympathizers and suspected spies were treated much worse. MI5 told suspected spies that they would be hanged or turned into a double agent working for the British. To this end,  interrogators in the "cage" resorted to sleep deprivation, starvation diets, stress positions (standing up for eight days on end) and the strappado (hanging from the wrists, originally devised by the Spanish inquisition) even though the official position was that "mental pressure but not physical torture is officially allowed." These techniques foreshadowed what occurred over a half a century later in Guantánamo Bay and Abu Ghraib. Cobain in a later chapters details the exceptional brutality of the British toward the Mau Mau in Kenya, the campaigns in Cyprus against EOKA and in the Aden Emergency.

National self interest rather than listening to our better angels has long served as a guide in the treatment of POWs. But the harsh treatment toward Jewish refugees the long litany of savage torture documented by Cobain is a cautionary warning about the danger of discarding or bypassing the rule of law and constitutional guarantees.

When people become hostage to their fears, they risk losing their humanity. Civilization can only be maintained when they marshal the courage to face them and act with restraint. The Mexican director, Alfonso Cuarón brilliantly explores this theme in his political thriller, Children of Men, which dramatizes a world mired in an apocalypse, but its dystopian vision is tethered to 2006 because the inhumanity resembles Iraq writ large. The film is loosely based on a 1992 novel, The Children of Men, by PD James that imagines a world facing extinction because of an infertility plague: the last child born eighteen years before is killed at the outset. 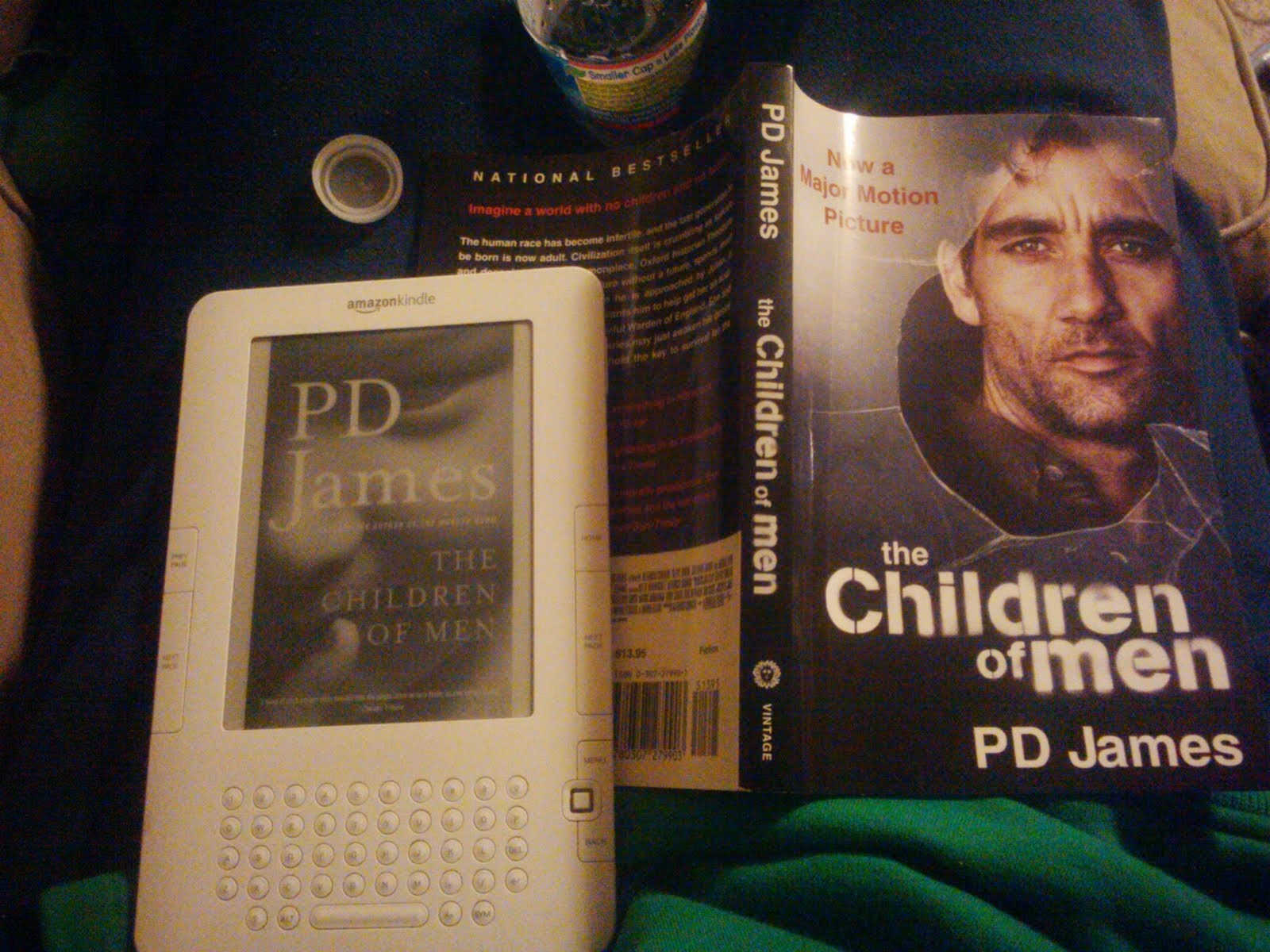 As an allegorical nativity for the ages, the setting could be the London Blitz, Stalingrad or Nazareth rather than England which is in the grip of a police state with security patrols, terrorist attacks and nightmarish refugee camps. In smog-shrouded London, religious fanatics chant that infertility is God’s punishment, the camera pans over refugees locked up in curb side cages and a bus that hauls the rest of them to the crowded camps has ‘Homeland Security’ emblazoned across the side. Ubiquitous soldiers manhandle and lock into cages illegal immigrants reminiscent of Abu Ghraib. Terrorists burst into a ghetto-like camp that spirals into an urban free-fire zone redolent of Fallujah. A government official, (in the novel he is the Warden of England who wields dictatorial power that reduces immigrants to slaves, enforces the collective drowning of the elderly and sends criminals for life to the Isle of Man to fend for themselves) has stashed into his office Michelangelo’s David with a prosthetic leg and Picasso’s war-epic Guernica, the latter providing a foretaste of what happens in the harrowing battle tableau. Representatives of the state and the human rights activists increasingly mirror each other in surrendering their humanity, the former bent on maintaining security and the latter deluded into forsaking non-violence and sliding into terrorism. Yet it is the courage of an avowedly apolitical, emotionally burnt-out civil servant who shepherds an immigrant pregnant woman through this maze of inhumanity to a sanctuary offered by (perhaps apocryphal) offshore benevolent scientists that sustains our hope that individuals can retain their human decency in times of devastating crisis and not succumb to the seductive appeal of creeping fascism in whatever form it takes. 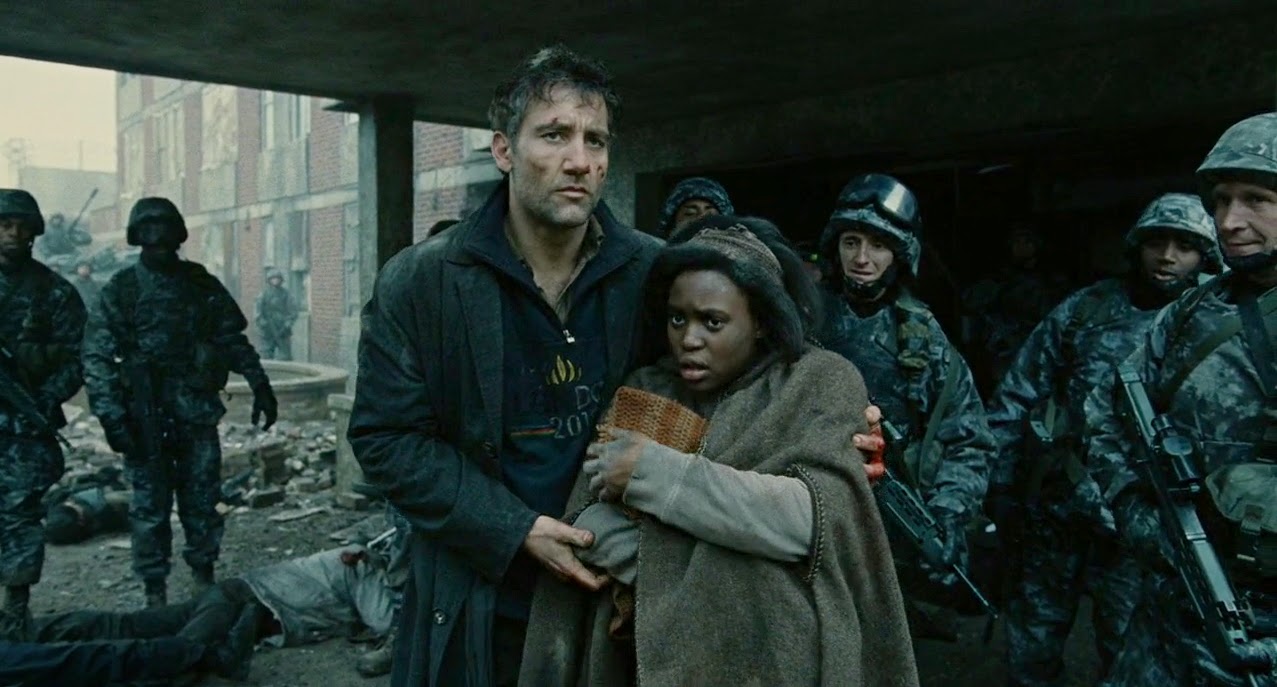