Humanity Challenged : Week One: Cruelty and its Alternatives

For the next eight weeks, I will be providing on this website a weekly overview of the course, "Humanity Challenged" that is being offered by the Life Institute at Ryerson University.

"Evil is socially enacted and constructed. It does not reside in our genes or our soul, but in the way we relate to other people."
—Roy F. Baumeister, Evil" Inside Human Cruelty and Violence

"The normal process of life contains moments...in which radical evil gets its innings and takes a solid turn....Disenchantment with ordinary life [follows] and...the whole range of habitual values...come to appear ghastly mockery."
—William James, The Varieties of Religious Experience

"While the evil of genocide and mass killing is not ordinary, the perpetrators most certainly are."
—James Waller, Becoming Evil

" The unsettling truth is that any deed that perpetrators of genocide and mass killing have ever done, however atrocious, is possible for any of us to do—under particular situational pressures."
—James Waller, Becoming Evil

As a starting point, I will briefly discuss the experiment conducted by Philip Zimbardo that he outlines in his 2007 book, The Lucifer Effect: How Good People Turn Evil and that will be followed up by a clip of the German film, Das Experiment, that is loosely based on that study.


The philosopher, Philip Hallie (1922-1994), one of the speakers of a conference on human evil in Bill Moyers' 1988 Special, Facing Evil, wrestles with the conflict  between what he calls "decent killers" which includes himself as a veteran of World War Two, and true pacifists as exemplified the remarkable couple André and Magda Trocmé. After writing a book on human cruelty that plunged him into despair, Hallie published in 1979 Lest Innocent Blood Be Shed: The Story of the Village of Le Chambon and How Goodness Happened There, an ethical inquiry into the beliefs and activities of the Trocmé couple. During the war, they became very involved in a wide network organizing the rescue of Jews fleeing the deportation efforts of the Nazi implementation of their Final Solution. After the establishment of the Vichy France regime, Trocmé became a catalyst whose efforts led to Le Chambon, a Protestant village in Catholic France, becoming a unique haven in Nazi-occupied France. Trocmé and other area ministers serving other parishes encouraged their congregations to shelter "the people of the Bible." Trocmé and his church members helped their town develop ways of resisting the dominant evil they faced. Together they established a number of "safe houses" where Jewish and other refugees seeking to escape the Nazis could hide. 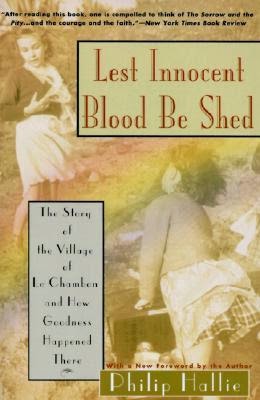 With the help of many dedicated people, families were located who were willing to accommodate Jewish refugees. Members of the community reported to the railroad station to gather the arriving refugees, and the town's schools were prepared for the increased enrollment of new children, often under false names. Many village families and numerous farm families also took in children whose parents had been shipped to concentration camps in Germany. Trocmé refused to accept the definitions of those in power. "We do not know what a Jew is. We only know men," he said when asked by the Vichy authorities to produce a list of the Jews in the town. Between 1940 and 1945 when World War II ended in Europe, it is estimated that about 3500 Jewish refugees including many children were saved by the small village of Le Chambon and the communities on the surrounding plateau because the people refused to give in to what they considered to be the illegitimate legal, military, and police power of the Nazis.
These activities eventually came to the attention of the anti-Jewish Vichy regime. Authorities and "security agents" were sent to perform searches within the town, most of which were unsuccessful. One tragic arrest by the Gestapo led to the death of several young Jewish men in deportation camps. Their house director Daniel Trocmé, André's second cousin, refused to let the children put in his care go away without him; he was then also arrested and later died in the camp of Maidanek. A minister in the Vichy government made an official visit to Le Chambon on August 15, 1942. Days later, the Vichy gendarmes were sent into the town to locate "illegal" aliens. Amidst rumors that Trocmé was soon to be arrested, he urged his parishioners to "do the will of God, not of men." He also spoke of the Biblical passage Deuteronomy 19:2–10, which speaks of the entitlement of the persecuted to shelter. The gendarmes were unsuccessful, and eventually left the town.

In February 1943 Trocmé was arrested along with another pastor Edouard Theis and the public school headmaster Roger Darcissac. Sent to an internment camp, they were released after four weeks and pressed to sign a commitment to obey all government orders. Trocmé and Theis refused and were nevertheless released although we are never clear as to how that happened. They went underground where Trocmé was still able to keep the rescue and sanctuary efforts running smoothly with the help of many friends and collaborators. Hallie called their acts incomprehensible "goodness" in the face of unfathomable evil. Filmmaker Pierre Sauvage tells the Le Chambon story in his 1989 Weapons of the Spirit that will be reissued in late 2014. 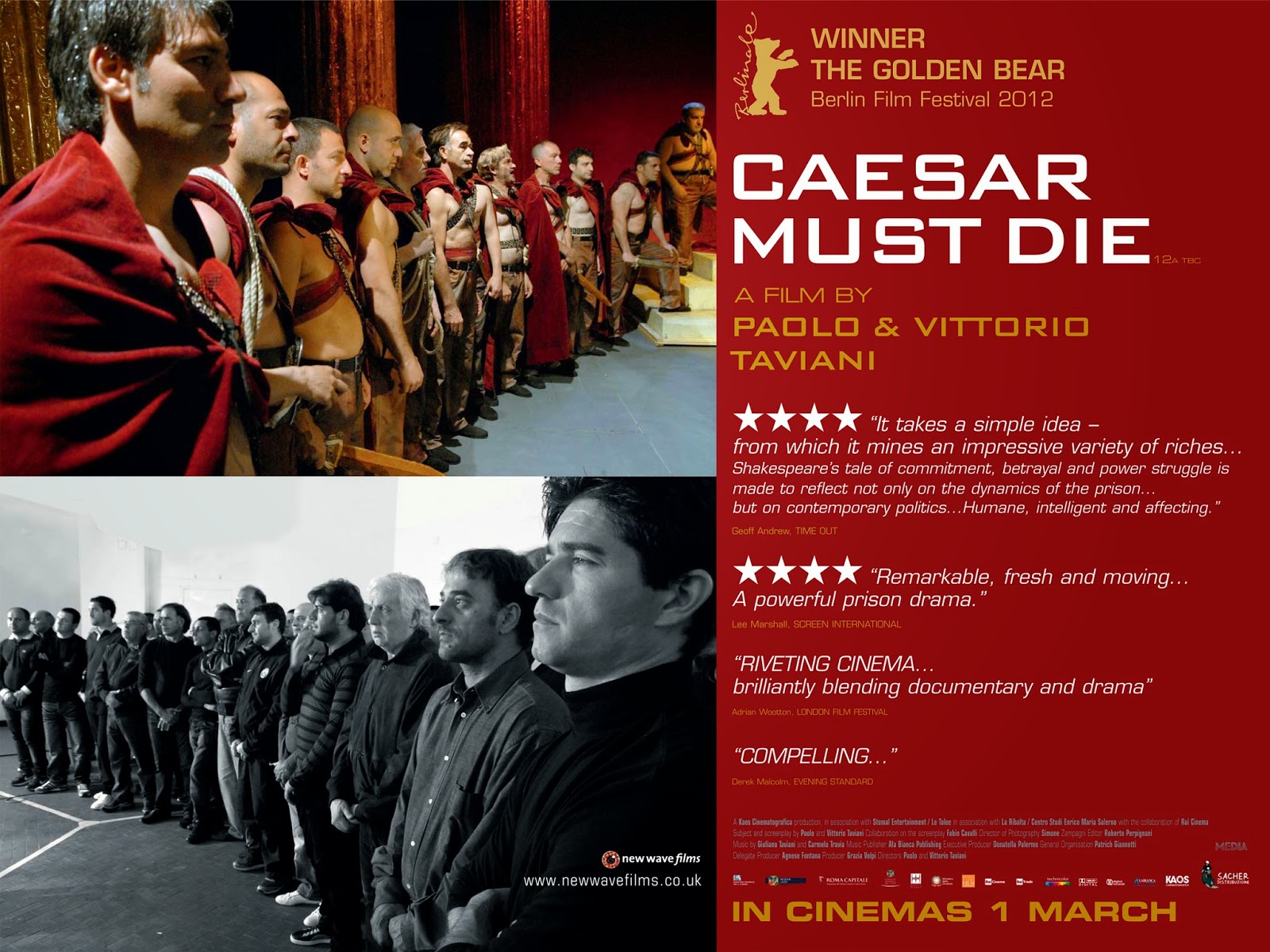 How art allows convicted criminals to experience the possibility of another life choice is evident in Caesar Must Die that Steve Vineberg reviews in Critics at Large
http://www.criticsatlarge.ca/2013/02/caesar-must-die-shakespeare-behind-bars.html#more


Reflections on As It is Heaven

Amateurs who enjoy singing, music, and community join choirs. Many of those who enjoy this hobby will be enthralled by As It Is in Heaven, a 2004 Swedish film written and directed by Kay Pollak; it was nominated for Best Foreign Language Film in the 2005 Academy Awards. The story focuses on a lonely but gifted conductor, his yearning to create music that will open the heart, a church choir, and its idiosyncratic members who live in a small rural town in northern Sweden.

Writer and director Kay Pollak has created an emotionally rich drama that vividly conveys both the delights and the challenges of small town living. The intimacy that blooms between Daniel and Lena happens very slowly and enables him to confront his own fears and lack of trust in other people. She helps him see that he needs a more balanced life; ironically this comes as she teaches him how to ride a bicycle. Inger, the minister's wife, finds herself liberated through Daniel's teachings and emboldened to tell her husband that she no longer believes in sin. Their marriage is rocked by the changes the outsider has brought to the community. For Daniel, the biggest surprise is that his love for these quirky people enables him to at last fulfill the mission of his life: "to create music that will open a person's heart."
~~~~~~~~~~~~~~~~~~~~~~~~~~~~~~~~~~~~~~~~~~~~~~~~
"During the more than 50 years I worked with choral singing, I have discovered that there is more behind the sheet of music, behind the modulation, articulation and other musical grammar. Singing, both the spontaneous as well as the well prepared act, carries emotions touching a person’s inner being. No-one yet knows what happens in our minds and souls during singing. What we do know is that singing has a healing effect of unknown dimensions. Some surveys are said to show that choral singers are happier people."          —Choir master Kjell Lonna 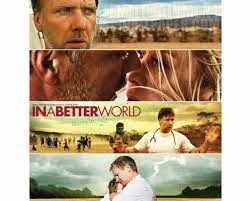 Another relevant film is the 2011 In a Better World. Set in modern day Denmark and what is likely South Sudan, In a Better World dramatizes the responses to acts of aggression, whether it is from a warlord, a schoolyard bully or a belligerent mechanic. What makes the film so exceptional is that it questions the inadequacy of passivity and vengeance. The film also illuminates the responses to grief and loss, and the process of healing.

Reviewer’s comment:
"An ethically ambitious, morally thoughtful–and deeply vexing–drama about the fragility of civil order and the menace of the lawless. A most deserving Oscar winner."