Week Eight: Contemporary Challenges: From Putinism to the Middle East 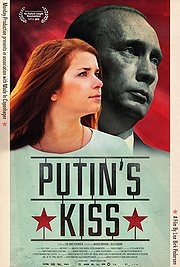 In Putin's Kiss Lisa Birk "Pedersen frames her film as a profile of Masha Drokova, who was only 16 when she joined Nashi in 2005 but whose smarts and enthusiasm catapulted her to the top echelon of the organization. A tireless Nashi activist who once collected a kiss from Vladimir himself on TV, Drokova was awarded a medal of honor from the president in 2007, attended a top university, and even had her own TV show, a real credential in a nation where the airwaves are strictly policed by the ruling party. But her growing friendships with liberal journalists—particularly the muckraking Oleg Kashin, who appeared as a guest on her show—pulled her from the far right toward the center and alienated her from Nashi's charismatic founder, Vasily Yakemenko. This isn't quite the human drama Pedersen might wish, but it's compelling enough, and more important, it gives us a look at conservative Russian politics at their most ruthless and vindictive. portrays contemporary life in Russia through the story of Masha, a 19 year-old girl who is a member of Nashi, a political youth organization connected with the Kremlin. Extremely ambitious, the young Masha quickly rises to the top of Nashi, but begins to question her involvement when a dissident journalist whom she has befriended is savagely attacked."
From a review by J. R. Jones from Chicago Reader 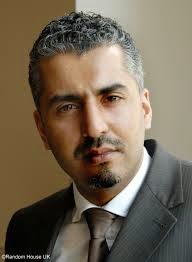 Maajid Nawazis is the Liberal Democrat parliamentary candidate for Hampstead and Kilburn and co-founder and chairman of Quilliam, a counter-extremism think tank. He spoke about his journey from being a true believer of being a militant jihad to his repudiation of those fundamentalist beliefs on Sixty Minutes. 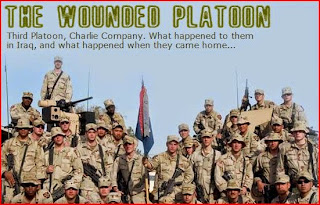 "This Frontline documentary, "The Wounded Platoon," accurately portrays how war's corrosive insanity, the very ingredient that can help one survive it, continues to inexorably gnaw away one's humanity until the only thing left is the insanity it instilled. Truly haunting.

The TVO program The Agenda  on November 12 had a full program on veterans making the transition from combat to civilian life. You can listen to it on a podcast or watch it though iTunes for free. Highly recommended. For a different perspective on a returning soldier see http://www.theglobeandmail.com/life/facts-and-arguments/a-shameful-family-history-of-war/article21556941/ Dr. Kip Pegley.
In early April the Canadian Opera Company (COC) opened its production of Hercules. The play — written in 500 BC and adapted by George Frideric Handel in 1745 — tells the story of a soldier’s struggles after returning home from war. Kip Pegley (School of Music) was invited to an advance performance of Hercules and gave a talk about war veterans, music and rehabilitation at the University of Toronto’s Munk School of Global Affairs as part of a symposium organized by the COC and the Faculty of Music, University of Toronto. Dr. Pegley sat down with Rosie Hales, Communications Officer, to discuss her research into music as a rehabilitation technique for war veterans suffering from post-traumatic stress disorder (PTSD) and how she hopes her research will help soldiers and veterans in the future.

Rosie Hales: Your research centres on music and veteran health. Why did you decide to choose this as a research focus?
Kip Pegley: I believe that the research we choose to undertake says a lot about us. For example, my father was a Korean War veteran and served in the Canadian Navy for 35 years. He was an emotionally reserved man; to learn more about him, I joined the Naval Reserves as a teenager. However, as I got older I realized that the best way to know him was through music – it was the one place he really opened up emotionally. Music was entwined with his sense of duty and his career in the Navy.
Since 2002, when Canada officially deployed our military to Afghanistan, I’ve been interested in learning more about what music means to this generation of soldiers. With so many soldiers returning with PTSD, I was also curious to seek out ways that music might help them while they are deployed as well as in post-deployment.
RH: How has the role of music for deployed soldiers changed since your father’s work in the Navy?
KP: When my father was deployed he was listening to big band and other music that was played over the radio with his fellow soldiers. Now, soldiers use different technologies, like iPods and CDs, to pump music through the tanks or listen in their bunks alone at night. For my father, music was more of a shared event but soldiers today have the option to make it a more personalized and individual experience.
RH: So, what kind of music do soldiers listen to when they’re going into war?
KP: The music soldiers blare in the tanks when they’re going into combat isn’t the music you might initially suspect: Popular culture today is saturated with “militainment,” a genre that conflates entertainment with war. Watching “militainment” movies or playing video games like Call of Duty or American Army might make us believe that soldiers listen to heavy metal and rap music to get them pumped up for combat. It might surprise some to know that a Canadian veteran I interviewed was going into combat in a tank with 10 other men singing along to Deep Blue Something’s “Breakfast at Tiffany’s.” The female tank driver, meanwhile, listened to hymns her grandmother sang to her as a child through her iPod headphones. This same female tank driver used music as a way to bond with the women living in her barracks – she played the Dirty Dancing soundtrack and that got everyone up and moving. Music provided them a safe opportunity to sing, dance and lower their hyper vigilance for a little while. 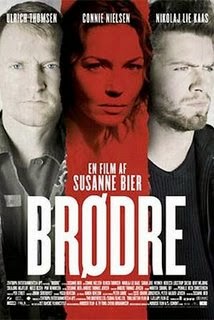 In the 2004 Danish film Brothers, two brothers unwittingly exchange roles under the fog of war in this gripping psychological drama superbly directed by Susanne Bier. Michael is a caring husband and father who risen to the rank of major in the Danish Army, while Jannick is an alcoholic with a violent streak who has been in and out of prison much of his life. When Jannick is released after serving time for armed robbery and Michael is sent to Afghanistan. When his wife Sarah receives word that Michael's helicopter has been shot down and the crew has gone missing, Jannick tries to assume some degree of familial responsibility, helping Sarah with the children and helping to keep the house in repair. As Jannick finally grows into a responsible adult, he and Sarah learn that Michael has been released from an Afghan military prison and is being sent home. Severely damaged as a result of his time in captivity, he's become an angry and emotionally broken man, haunted by ugly memories and a threat to his wife and daughters. The film vividly dramatizes that civilians as well as warriors pay a terrible price for what takes place on the battlefields.

For a fascinating article on the relationship between the television series, Homeland  and the different approaches to national security under the Bush and Obama administrations see   https://www.jacobinmag.com/2013/11/homeland-and-the-imagination-of-national-security/

The following is an excerpt:

"In the War on Terror, it seemed, the erstwhile inability of security bureaucracies to imagine potential threat scenarios might be remedied by drawing on the creativity of Hollywood scriptwriters and right-wing pulp novelists. What was needed, it was thought, was to get inventive in conjuring up potential threats, as well as breaking down pre-existing assumptions of how best to prevent them. Hollywood became as significant as Arlington, Fort Meade, and Langley in the landscape of the US national-security state.
One early documented case of this reverse effect occurred with the Fox TV series 24. In effect, the show provided a weekly policy briefing to the nation on the myriad threats supposedly faced by the US and how best to counter them. Joel Surnow, the show’s co-creator and executive producer, told journalist Jane Mayer, “America wants the war on terror fought by Jack Bauer. He’s a patriot.” Since Bauer’s main tactic in the show is torture, the implication was clear.

In the fall of 2002, government lawyers responsible for authorizing new techniques of interrogation felt that the second season of 24, then being broadcast, gave them the green light to approve torture techniques that had previously been considered fundamentally immoral. The limits of acceptability had been collectively re-imagined, creating a new “common sense” of national security. The fact that a film like Zero Dark Thirty presents the use of torture as an acceptable topic of discussion rather than an absolute wrong is a good indication of how much the terror war has permanently shifted earlier ethical norms in the name of a Hollywood-infused “moral clarity” against terrorism.
Yet, the failure of the war in Iraq, the declining credibility of the United States on the global stage, and the backlash against George W. Bush’s approach necessitated a shift. Enter Obama and the age of “smart power.” The US national-security state now claims to be interested in winning “hearts and minds” as much as “shock and awe.” Cultural knowledge, targeted strikes, and patient intelligence-gathering are supposed to be the new methods of the War on Terror, rather than blanket demonization, military occupations, and fabricated justifications for war.

A marked departure from 24’s ticking time-bomb scenarios, Showtime’s Homeland features storylines that center upon the psychological turmoil leading to what homeland security officials call “radicalization,” particularly when it involves Americans converting to Islam. CIA consultants are reportedly involved in the show’s script development."
Posted by Robert A. Douglas at 19:46