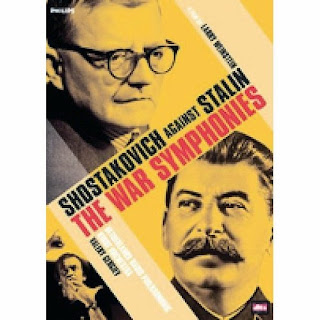 The War Symphonies, a 1997 Canadian-German co-production is the most recent, and in some ways the most impressive, of the sequence of revisionist programmes on Shostakovich. Produced for Rhombus Media by Niv Fichman, the film is directed by the distinguished multiple award-winner Larry Weinstein. Shot on location in St. Petersburg and Moscow, this 82-minute documentary includes excerpted performances by the Netherlands Radio Philharmonic and the Mariinsky Theatre Orchestra, both conducted by Valery Gergiev, who in addition offers his views on the featured works: a scene from Lady Macbeth, symphonies 4 to 9, and the burlesque Rayok (given in tantalising glimpses of a sharp Mariinsky production). 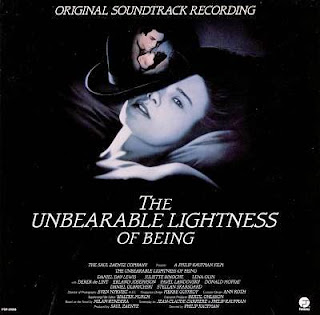 In Philip Kaufman's surprisingly successful film adaptation of Czech author Milan Kundera's demanding 1984 best-seller, The Unbearable Lightness of Being, Daniel Day-Lewis stars as Tomas, an overly amorous Prague surgeon, while Juliette Binoche plays Tereza, the waiflike beauty whom he marries. Even though he's supposedly committed, Tomas continues his wanton womanizing, notably with his silken mistress Sabina (Lena Olin). Escaping the 1968 Russian invasion of Prague by heading for Geneva, Sabina takes up with another man and unexpectedly develops a friendship with Tereza. Meanwhile, Tomas, who previously was interested only in sex, becomes politicized by the collapse of Czechoslovakia's Dubcek regime. The Unbearable Lightness of Being may be too leisurely for some viewers, but other viewers may feel the same warm sense of inner satisfaction that is felt after finishing a good, long novel. 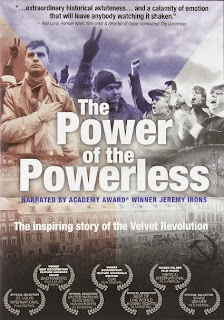 Sometimes we are forced to choose between self-interest and the greater good. Under pressure at critical moments, we make choices that define who we become. People who remain silent when their government persecutes and imprisons those trying to peacefully reform it, not only make a regrettable choice for themselves; their decision is passed down to future generations. How remarkable it is then, when those who were persecuted, rise up and not only overcome tyranny through non-violence, but forgive those who abandoned them in the crucial moment.The Power of the Powerless, narrated by Academy Award winner Jeremy Irons, is a film that deals with this poignant subject by telling the inspiring real-life story of dissidents like the playwright, Vaclav Havel; the struggle against tyranny during the communist era in Czechoslovakia; and young people who provided the final impetus to bring down Czechoslovakia's communist regime during the Velvet Revolution of 1989. The film also investigates the relevance of the Velvet Revolution today and asks why a majority of young Czechs know nothing about it. 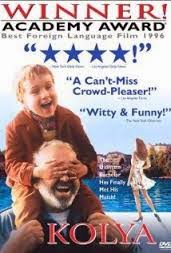 A 55-year-old Louka is a gifted musician in Czechoslovakia who once made a good living playing in the State Symphony Orchestra. However, he has little use for the government, and after putting a playfully insulting statement on a government form, he's been banished from official music making. He ekes out a living by giving private lessons, painting gravestones with gold leaf, and performing at funerals. Louka also likes to chase younger women, a surprisingly number of whom are more than happy to be caught. However, when a friend suggests marriage to a stranger, Louka is unexpectedly willing to consider the matter. It seems that Broz, a gravedigger and a good friend of Louka's, has a niece, Nadezda with a young son who wants to stay in Czechoslovakia. However, she's a Russian citizen and lacks the proper papers. In order to stay, the young mother needs to marry a Czech citizen, and she and her aunt are willing to pay a "husband" for his troubles. Louka, hard up for cash and in need of a used car, grudgingly agrees to the arrangement and weds Nadezda. However, once she has her papers, Nadezda heads for West Germany to be with her boyfriend, and after her aunt unexpectedly dies, Louka finds himself in custody of his new "stepson," six-year-old Kolya  A confirmed bachelor, Louka knows next to nothing about taking care of a child, and he discovers that parenthood cramps his style with the ladies. However, Louka and Kolya soon become good friends, and Louka finds his outlook on life beginning to change, just as the "Velvet Revolution" sounds the call of a new era in Czechoslovakia. Kolya won both the Academy Award and the Golden Globe as Best Foreign Language Film of 1997. ~ Mark Deming, 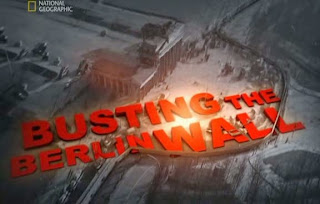 For 28 years, the Berlin Wall split a city in two and divided a nation with two million tons of concrete, 700,000 tons of steel, attack dogs, tank traps, death strips and tripwires. While its dangers kept most GDR citizens at bay, others were spurred on to overcome it, by digging under it, hiding in car trunks, flying over it in a hot-air balloon, and even surfing around it... Busting the Berlin Wall examines the most daring escapes, and interviews former border guards, politicians, spies and escapees, and how quickly it collapsed. 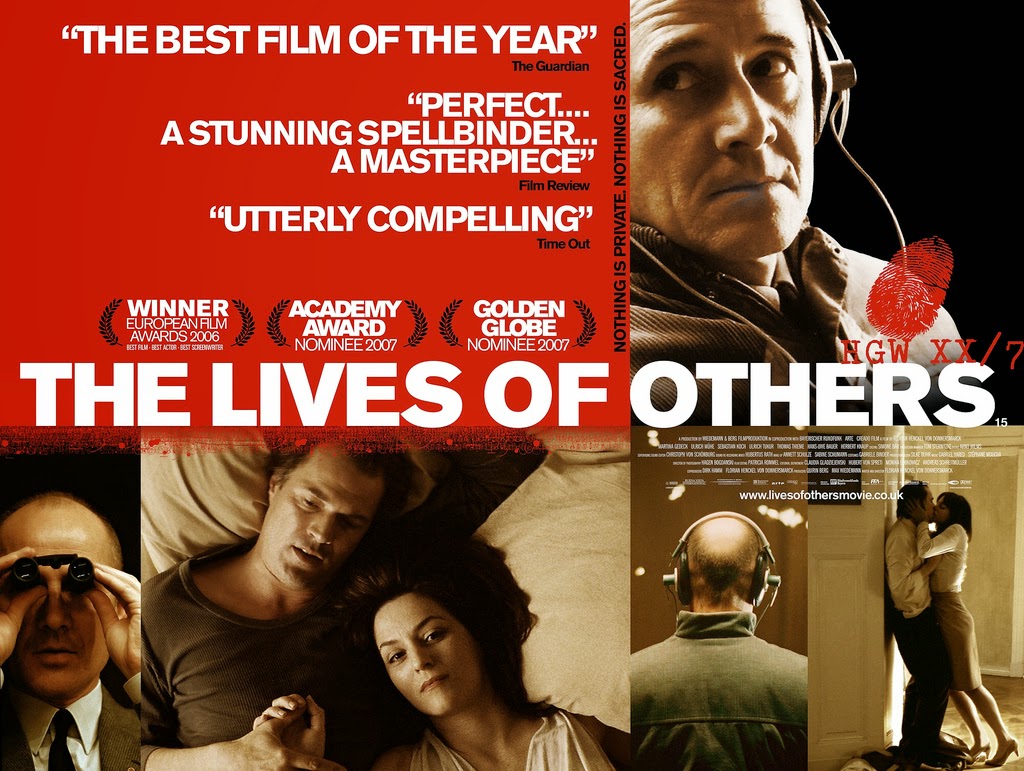 Recommended films we will not have time to show clips: 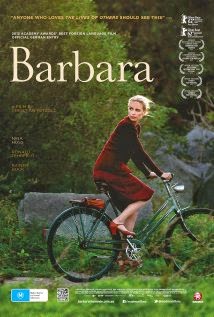 Winner of the Best Director prize at the 2013 Berlin Film Festival, Barbara is a simmering, impeccably crafted Cold War thriller, starring the gifted Nina Hoss as a Berlin doctor banished to a rural East German hospital as punishment for applying for an exit visa. As her lover from the West carefully plots her escape, Barbara waits patiently and avoids friendships with her colleagues-except for Andre, the hospital's head physician, who is warmly attentive to her. But even as she finds herself falling for him, Barbara still cannot be sure that Andre is not a spy. As her defensive wall slowly starts to crumble, she is eventually forced to make a profound decision about her future. A film of glancing moments and dangerous secrets, Barbara paints a haunting picture of a woman being slowly crushed between the irreconcilable needs of desire and survival. Germany's official Oscar submission for Best Foreign Language Film. 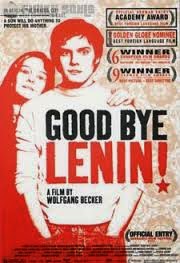 October 1989 was a bad time to fall into a coma if you lived in East Germany - and this is precisely what happens to Alex's mother, an activist for social progress and the improvement of everyday life in socialist East Germany. Alex has a big problem on his hands when she suddenly awakens eight months later. Her heart is so weak that any shock might kill her. And what could be more shocking than the fall of the Berlin Wall and the triumph of capitalism in her beloved country? To save his mother, Alex transforms the family apartment into an island of the past, a kind of socialist museum where his mother is lovingly duped into believing that nothing has changed. What begins as a little white lie gets more and more out of hand as Alex's mother, who feels better every day, wants to watch TV and even leaves her bed one day…
In a wonderful, touching and comic manner, Good Bye, Lenin! tells the story of how a loving son tries to move mountains and create miracles to restore his mother to health - and keep her in the belief that Lenin really did win after all!