Spaces of Blue Week Three: Remembering the Holocaust and Efforts at Restitution

Forgiveness does not happen quickly.
For great injustice, coming to forgiveness may include a long process of grief, outrage, sadness, loss and pain.
True forgiveness does not paper over what has happened in a superficial way. It is not a misguided effort to suppress or ignore our pain. It cannot be hurried. It is a deep process repeated over and over in our heart, which honors the grief and the betrayal, and so in time ripens into the freedom to truly forgive.
Jack Kornfield, The Art of Forgiveness, Lovingkindness, and Peace 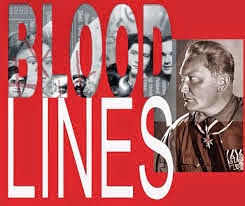 Bettina Goering, grandniece of Herman Goering, has long tried to bury the dark legacy of her family history. Painter Ruth Rich, a daughter of Holocaust survivors, cannot resolve her deep-rooted anger over the suffering of her parents and the loss of an older brother in the Holocaust. Bettina seeks out Ruth in an attempt to confront her enormous guilt and her fear that the capacity for evil is in her blood. When the women meet, their hidden guilt and rage clash in a series of intimate and extraordinary meetings.
Provocative and deeply moving, Bloodlines by Cynthia Connop follows Ruth and Bettina as they face the past in their quest to heal the future. Their meetings are interspersed with individual interviews, powerful images from Ruth’s paintings “Songs of Darkness” and archival photos. This contemporary film brings to light, in a way never before seen, the unwritten cost of war and genocide on future generations of both victims and perpetrators. Given recent events in Darfur, Rwanda and Serbia, this film provides relevant and timely insight into the difficult process of reconciliation and forgiveness, and the long-term consequences of hatred.
At a time when vast rifts between groups are tearing the world apart, this gripping and ultimately hopeful film is a beautiful testament to the power of reconciliation. 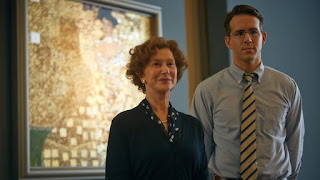 Bloodlines was filmed in Australia, USA and Germany and produced in the Northern Rivers, Australia.

Woman in Gold is the remarkable true story of one woman's journey to reclaim her heritage and seek justice for what happened to her family. Sixty years after she fled Vienna during World War II, an elderly Jewish woman, Maria Altmann (Mirren), starts her journey to retrieve family possessions seized by the Nazis, among them Klimt's famous painting 'Portrait of Adele Bloch-Bauer I'. Together with her inexperienced but plucky young lawyer Randy Schoenberg (Reynolds), she embarks upon a major battle which takes them all the way to the heart of the Austrian establishment and the U.S. Supreme Court, and forces her to confront difficult truths about the past along the way. 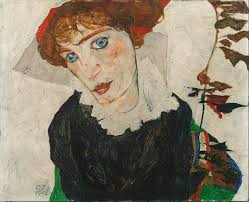 The story of a painting that became a lightning rod for the art world, Andrew Shea’s doc, The Portrait of Wally recounts the dizzying journey of Egon Schiele’s "Portrait of Wally"—from Lea Bondi’s private collection to Nazi thievery, and from shady postwar dealings to the walls of the Museum of Modern Art, where Bondi’s heirs sought restitution in 1997. Though overly dependent on a roundelay of talking heads, the film escalates into an ace legal thriller, spinning a web of shame that snags everything from the Austrian government to America’s most beloved not-for-profits. Even after an all-is-forgiven $19 million legal settlement, the ghosts of greed and anti-Semitism continue to haunt not only the Schiele, but an entire era of institutional arrogance. Review by Eric Hynes

In The Reader, Michael Berg (David Kross), a teen in postwar Germany, begins a passionate but clandestine affair with Hanna Schmitz (Kate Winslet), an older woman who enjoys having classic novels read to her. Then Hanna mysteriously disappears, leaving Michael heartbroken and confused. Years later, Michael, now a law student, gets the shock of his life when he sees Hanna on trial for Nazi war crimes.

Set at the end of the war in Germany Lore (2013) is powerful account of young girl who inadvertently begins the process of de-Nazification. See my review in Critics at Large   http://www.criticsatlarge.ca/2013/07/lore-breaking-down-ideological-barrierhtml#more

We will not have time to show clips from the following: 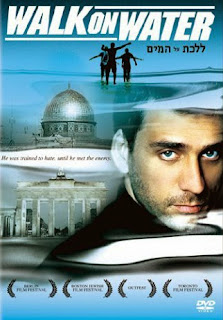 "Dealing with thorny issues in a thoughtful, insightful way, Israeli filmmaker Fox and his cast create vivid, recognisable characters who dare to grapple with untouchable topics. And even if the story is a bit formulaic, the film is gripping and vitally important.


Eyal (Ashkenazi) is a Mossad hitman struggling to cope with his wife's recent suicide. So his boss (Shemer) puts him on a simple job: play tour guide to German tourist Axel (Berger), in Israel visiting his sister (Peters). Their grandfather was a Nazi officer who might still be in hiding. As Eyal spies on the siblings, he begins to examine for the first time some deeply held views and prejudices ... in more than just racial-political areas.
The plot is complex and layered, constantly surprising us and taking us places we don't really want to go. And it's perhaps the weakest thing in the film, since it plays a bit too closely by political thriller rules. What makes the film essential viewing is the character development, as they express honest, provocative views on a variety of issues, all while living out the central conflicts in their interaction--racism, politics, religion, sexism and even sexuality.
The central friendship between Eyal and Axel almost startlingly authentic. Ashkenazi and Berger get it note perfect--physically, mentally, emotionally--as their layered personalities mesh and clash and each discovers something surprising about himself. There are several moments when we fear it might all go horribly sappy, melodramatic or stupid, but the script stays on just the right side of that fine line, pushing the characters to the brink, but not over it. At the core this is a clash between pessimists and optimists, fanatics and liberals.
It's powerfully introspective, emotional and intelligent, but it's also lively, witty and often quite cynical about the world we've created ('They always play sad songs after a suicide bombing,' Eyal snaps, retuning the car radio). Music plays an important role in the film, encouraging the characters abandon their denial and face the truth about the world. Perhaps this film can do the same thing." Review by Rich Cline   (I highly recommend this film.)


Another film I would highly recommend is The Flat. The following is a review which I will reproduce. 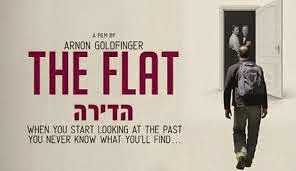 "Borne on the generational ripples of a painful history, Arnon Goldfinger's The Flat is a true-life detective story that uncovers much more than the tangled roots of its maker's family tree. The flat in question is the cluttered Tel Aviv apartment of Mr. Goldfinger's recently deceased grandmather, a German Jew who, along with her husband, emigrated from Berlin in the 1930s. Among the antiques, letters and almost a dozen mink stoles was a commemorative coin bearing a swastika  on ones side and a Star of David on the other. This bizarre artifact would come to symbolize a slowly unraveling mystery, one that would eventually lead to  drowsy German suburb and the daughter of of a high-ranking Nazi propagandist.

Maintaining a gentle, self-effacing presence and bracingly direct style, Mr. Goldfinger determines to learn what the past can offer a family that,like his, "lives only in the present." Tirelessly prodding the scabs of denial and the bruises of  Holocaust memories, he wonders why his strangely incurious mother, Hannah, never questioned her parents too closely about the war. "What for?" Hannah responds, and the question reverberates through the film that begins as a family quest but evolves into a gripping study of know-don't tell reticence."