A review of a novel and television series that originally appeared in Critics at Large about a time-travelling woman may be a surprise to readers of this site but I have included it here because it highlights two characters, seen below, who struggle to maintain their humanity and a third who admits he has crossed a line and dwells in the darkness.


I likely would not have read Diane Gabaldon’s gargantuan 1991 novel Outlander if I had not seen the sixteen-episode first season of the Starz television series, a faithful adaptation of the novel in which large swathes of dialogue are directly transposed to the script. I surprised myself by watching the entire series since I have not paid much attention to the multi-genre of historical fiction/romance and time travel/fantasy. Stephen King’s 2011 Kennedy assassination thriller 11/22/63 was gripping, but to make a substantial investment of time about the life of a twentieth-century woman who stumbles back into eighteenth-century Scotland? My interest was piqued by a few positive notices and a news report that the Irish actress, Caitriona Balfe, had been nominated for a Golden Globe for her role in playing Claire Beauchamp. I am pleased to report that the Outlander series, supplemented by reading the source novel, has been an emotionally powerful and aesthetically-satisfying experience. We are treated to luscious cinematography of the Scottish Highlands (inspired by the television drama, Trafalgar tours is sponsoring a trip to the Highlands), haunting Scottish folk music created by Bear McCreary, the creation of a complex believable world, strong performances from actors who inhabit three-dimensional characters and a script that allows them to grow and develop.
The narrative begins in 1945 after the end of World War Two. We meet Claire Beauchamp, an experienced, wartime British nurse and her somewhat inaccessible, intellectual, soon-to-be Oxford professor husband, Frank (Tobias Menzies). The two set off on a holiday to the Scottish Highlands in the hopes of rekindling their relationship following years apart during the war. When they are not having sex, Frank, who has inherited a cache of local historical records, delves into his family history, and Claire explores her new passion for medicinal herbs and plants in the lush Inverness countryside. Both interests later figure in the drama as Claire explores the latter’s potential healing power and their capacity to poison; she learns through Frank’s genealogical research about the character of a particular odious ancestor that she will exploit to her advantage. One purpose of the pilot is to give viewers the opportunity to know them as a couple, again important since we come to see how her relationship with Frank differs from that with the Scot, Jamie Fraser (Sam Heughan) that develops within their eighteenth-century context. 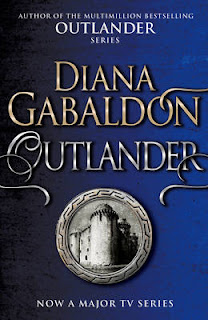 Not long after Claire witnesses an annual Druidic ritual in which a coven of twentieth-century witches dance around a landmark site, Craigh na Dun, a set of ancient standing stones – a ritual that is reprised later on in the eighteenth century with ominous portents – she touches one of the monuments and finds herself transported back into 1743 Scotland into the midst of a firefight between British troops and kilted Highlanders. It is an emblematic moment: throughout the ensuing episodes, she is frequently caught in the crosshairs of this conflict and the political intrigues within and between the tribal clans. The clans are suspicious that Claire is a British spy and the British are suspicious of her close connection with one of the clans. As she lives among this clan, Claire’s mission is to stay alive as she uses her knowledge of history to stop the Jacobite rebellion that culminates in the disastrous 1745 Battle of Culloden Field before it occurs – to save Scotland from the English – and to find again the sacred stones so that she can return to her own world and to Frank.

In this strange new world, Claire’s first encounter is with Jonathan "Black Jack" Randall, a British captain who is hunting down Scottish rebels. In his review of series pilot, Mark Clamen suggests that Randall, a startling lookalike of her husband (also played by Menzies), is his “dark doppelgänger in the form of his ancestor.” From the beginning, Randall’s malevolence is clearly established from the outset but as the drama unfolds, his psychological hues darken as the depth of his sadism and depravity deepens.

The heart of the novel and the series is the female protagonist, Claire Beauchamp, or as the Scots call her,Sassenach, meaning Outlander. Assisted by Gabaldon’s novel and the series script, Caitriona Balfe’s nuanced performance enables Claire to become a fully realized character and upend the trope of the damsel in distress. Throughout, she is a compelling presence and completely convincing as her character rationally assesses a problem and demonstrates defiant competence; she is fiercely independent, but not resistant to the power of romance without ever succumbing to smarmy sentimentality. More fully alive in the eighteenth century (except perhaps in the flashback scenes when tending to wounded soldiers during World War II), Claire remains feisty and resourceful. She even learns to kill with a knife, which comes in handy when she is assaulted by a British would-be rapist. From the first episode, she demonstrates her twentieth-century medical skills by nursing Jamie, an injured, gallant warrior. She gradually earns grudging respect from clan members as a healer, even as they speak Gaelic (without subtitles) to exclude her from conversations.

At this juncture, it is worth commenting on one of the few differences between the novel (the first of eight so far), and the series. Throughout the novel, Claire is the narrator; whereas, Balfe as Claire offers voice-over narration that not helps to move the story along and enables her to plot out strategy in different contingencies she confronts, but more importantly, it offers viewers access to her thoughts when for the most part, she could not share them with anyone. But not all of the drama is narrated by her. Ronald D. Moore, the creator of the television series, decided that certain sequences did not require Claire’s presence. Freed from her perspective, the drama returns to 1945 in order to track Frank’s desperate search for his missing wife. He is not the mild-mannered scholar that we earlier encountered in the pilot. Instead, he is belligerent with the police whom he feels are incompetent. Sneering at Scottish folklore, he sullenly lapses into drink and turns an attempted mugging into a fierce fight in which he nearly kills a man. The point of these brief scenes is to suggest a genetic link between Frank and his distant ancestor, a connection that dramatically makes sense.

Throughout the series, we witness the quick-tongued verbal sparring that exudes sexual electricity between her and the hot-tempered and yet gentle Jamie before and during their romance – that includes beautifully shot erotic scenes – which begins as a marriage of convenience to protect her from the Randall’s depredations. That security screen is invariably challenged and she is put at risk. Ironically, it is Jamie who faces a greater threat not only from the British authorities, who have put a price on his head, but from the perverse Black Jack Randall. He has already taken pleasure in subjecting the young Scot to 100 lashes of the cat o' nine tails, scenes that we are forced to watch through graphic flashbacks.


In both the book and the drama, there are two pivotal points regarding Claire’s return to Craigh na Dun. In the first, when the men are distracted, she heads in the direction of the rocks; in the drama, she runs and the effect is heightened by having Frank searching among the stones in 1945, both yelling each other’s names. However, Claire is intercepted just as her hands land on one of the time-traveling pillars, and she is hauled back to Fort William where Black Jack Randall is waiting with his frightening paraphernalia for the purposes of interrogation. The scene at the stones hums with poignancy, and yet it is also jarring since we just saw Frank almost kill a man. The second occurs after Claire and Jamie’s relationship has deepened – there is much more tenderness between the two of them than we ever witness between her and Frank – and she has just told him about her history. Trying to absorb her bizarre story, he escorts her to the site acknowledging that his world has nothing to offer her but danger, an admission that he would have never made in earlier episodes and evidence of his growth as a human being; she offers a painful farewell, but he has already departed. Sometime later she reappears and asks Jamie to take her to his home. In this instance, the novel offers a plausible explanation for her behaviour absent from the drama. Claire reflects upon missing the amenities of ‘civilization’ – convenient travel, indoor plumbing, hot baths and better medical care – but the emotional power of her life in the wilderness, which obviously includes Jamie, dictates the decision. The novel and the drama do complement each other.

The penultimate episode of the season, in which the camera unflinchingly captures Jamie’s prolonged torture and violation by Randall, is a visceral experience for the viewer containing some of the rawest scenes ever done for television, at least that I have ever seen. (This admission might indicate how sheltered I have been. I am aware that the ballyhooed Game of Thrones contains grisly scenes but I have not watched the series.) The director, Anna Forester, might have implied the violence with quick cutaways. But she decided to hew to the original source material – reading it is still easier – by allowing the camera to explicitly portray Jamie’s brutal treatment. Yet the violence never feels gratuitous or sensationalized, given that Randall readily admits that he lives in the darkness and what we have already witnessed by him. I can hardly imagine the challenges for the actors, but Heughan, Menzies and Balfe deliver searing performances.

The first season finale is largely set in a Scottish monastery (in the book it is a French abbey) while Jamie’s physical wounds begin to heal. Suffering from post-traumatic stress and reduced to a shell of his former self, he still experiences residual trauma and involuntary flashbacks. He is wracked with guilt and afflicted with a desire to die. He refuses food and is reluctant to have anyone touch him. His spirit has been so damaged that for a time he cannot separate Claire from his torturer in his mind. When she leans towards him, he sees Randall, the same way he saw her instead of him in the prison. He blames himself for his participation in the assault and being complicit in it. “I roused to him, Claire,” he confesses, horrified by his body’s biological betrayal wondering whether he has committed a deeper moral transgression from which there is no redemption.

Throughout his ordeal, both the novel and the drama subvert another trope, that of female sexual violence which traumatizes the victim. The time-travelling Claire repeatedly escapes that fate while Jamie does not. Whether his spirit can be restored is likely a major theme in the subsequent novels and in the show's second season (which will premiere on Starz on April 9th). It will not be easy: just look carefully at the ambivalence on his face when Claire shares with him what should be good news. In the meantime, we can celebrate one of the best television series in recent years.
Posted by Robert A. Douglas at 12:55