A Spy infiltrates ISIS in Daniel Silva’s The Black Widow

The following review was originally published in Critics at Large and is reproduced on this site because I have written extensively about its subject, terrorism and counter-terrorism in reviews and in the second volume of That Line of Darkness.


The murder of civilians over the last couple of years in France and northern Europe to my knowledge has been portrayed in fiction at least twice, in Todd Babiak’s, Son of France, and most recently in Daniel Silva’s, The Black Widow (HarperCollins, 2016) – before the events in reality actually occurred as both authors indicate. Silva has written sixteen novels in his Gabriel Allon spy series about an Israeli master spy, and on the basis of his current offering – the first that I have read – he is skillfully adept at rendering a gripping page-turning thriller. There are sufficient backstories to inform new readers: Allon began his career as a spy and assassin when he tracked down the Palestinian terrorists who killed Israeli athletes at the 1972 Munich Olympics; he lost a son to a terrorist car-bomb, shattering his wife’s mental faculties leaving her languishing in a care home. At this point in his career, his fieldwork appears over. Because of his past record of derring-do exploits along with some mishaps, the fabricated story of Allon’s death has been circulated. He is actually living in Israel, virtually in hiding in large part to protect his new family, and he is on the cusp of becoming security chief for “the Office” known in real life as the Mossad. His cover is that of an internationally recognized art restorer and we initially meet him in The Black Widow working on a Caravaggio at the Israel Museum.

Just prior to taking on this new responsibility, a terrible atrocity occurs in Paris when a French conference centre, organized to study the growing anti-Semitic violence, is the victim of a terrorist truck bomb attack. Hannah Weinberg, the woman who heads the centre, along with everyone else at the conference, is killed. The terrorist is a woman seeking revenge for the death of her fiancé who was killed in Syria fighting for ISIS, hence the novel's title. Since Weinberg had a personal connection with Allon and because the victims were Jews, a top secret French intelligence team seeks the assistance of Allon in locating and eliminating a mastermind terrorist known only by several security services as “Saladin” who has orchestrated the attack. 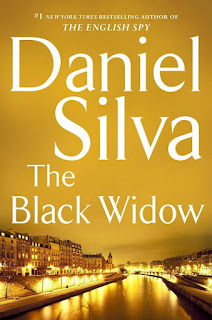 Allon accepts the task and recruits a French-born Israeli female doctor, Natalie Mizrahi – who, among her other skills, is fluent in Arabic – to identify the terrorist so that he can be captured or eliminated in order to prevent future attacks. Natalie is given a crash course in spy tradecraft that includes familiarizing herself with her cover: the daughter of Palestinian refugees who lost a loved one fighting for ISIS, now hoping to wreak revenge, hence another allusion to the title. Her persona as Leila is so convincing that the reader gains a sympathetic perspective on the Palestinian cause even though Silva wants us to be supportive of the Israeli security personnel. Given how dangerous Natalie’s role as an infiltrator into caliphate territory is, both Allon and “Leila” understand that she must persuade ISIS supporters of her authenticity when she travels to an Islamic State training camp in Syria with the goal that her medical skills will invite the attention of Saladin. And that she does.

Natalie becomes the major character in The Black Widow and the scenes wherein she is featured – in Paris, Jerusalem, Raqqa, Syria, and Washington – are compelling. Silva is a master at creating suspense as the novel races to its propulsive conclusion in the Washington environs. Without giving too much plotline away, I will say that in Syria Saladin informs her that she will have a primary role in his next attack, one that will force American leaders to bring the fight back to ISIS territory in the caliphate. Saladin has paired Leila to work in Washington with the woman who was the terrorist perpetrator in Paris. Silva unfolds the narrative climax in a manner that is chillingly plausible and, in keeping with the genre’s conventions, most but not all of the loose threads are tied up.

Silva, a former journalist currently living in Florida, injects some scathing political commentary toward the Obama administration. The exchanges between CIA officials and Allon suggest that American and Israeli security officials disparage the President’s Iran nuclear agreement, even though in reality Israeli security officials in 2016 do not seem all that concerned. (They do consider Iran as a major threat to regional security but as a supporter of terrorist groups not for its nuclear capacity.) Even Silva’s criticism of the President – he never mentions President Obama by name in the text – for underestimating the threat posed by ISIS seems misplaced. They may have carried more relevance in 2015 when Silva wrote the novel than the reality of 2016. Yet Silva rightly acknowledges that Obama's measured responses in his determination to avoid a major war in the Middle East is preferable to the alternative that would only play into ISIS’s apocalyptic fantasies. What is the most terrifying implication of this novel is to reflect on how Obama’s erratic successor would respond to that crisis imagined in The Black Widow. Perhaps that is a fit subject for Silva’s seventeenth novel.
Posted by Robert A. Douglas at 20:56