Novels about the Third Reich, Part II: Jessica Shattuck’s Women in the Castle

This review, originally appeared in Critics at Large, is reproduced on this site since a central theme of this novel is to what extent can people across that line of darkness and still retain their humanity.

Two pivotal scenes, spanning over sixty years, remain in the mind long after reading Jessica Shattuck’s character-driven, historically-informed (with excellent sources acknowledged at the back), and emotionally moving Women in the Castle (William Morrow/Harper Collins, 2017). The first occurs in the prologue set in 1938 Germany, on the cusp of Kristallnacht, in a Bavarian castle during the von Lingenfels’ annual family party. Although some of the guests sport Nazi insignias, a number of others are assembled in the study of the host, Albrecht, plotting active resistance to Hitler’s zealotry – fearing that if things go wrong, their families will suffer. His wife, Marianne, interrupts and fully cognizant of Hitler’s madness and thuggery, challenges them to take action. When her charismatic childhood friend, Connie Fledermann, appoints her the “commander of wives and children,” she accepts.

The second scene, the result of fulfilling that responsibility, occurs near the end of the novel in the same setting. Marianne, now an elderly woman who lived for years in America, has been invited to return to Germany to celebrate the launch of a glowing biography of her. The subtitle says it all: “Moral Compass of the Resistance.” Before she speaks to the attendees, self-reflection and conversation have shaken her black-and-white view of life. She stumbles and is supported by another character who assures her, “We need our heroes. No more apologies,” that recalls an ironical counterpart from Bertolt Brecht’s drama, Life of Galileo: “Unhappy the land that is in need of heroes.” The trajectory Marianne undertakes between these two scenes constitutes the main thrust of the novel that takes place in a dilapidated, leaky castle in Germany’s American zone between 1945 and 1953, with back stories stretching to the early 1930s. Unfortunately, those back stories do not include tableaus from Marianne’s life, leaving the reader to wonder how was it that she became the politically aware, dominant personality that pervades most of the novel. By contrast, Shattuck provides fleshed out portraits of the two other major characters, enabling us to better understand, even if we do not approve, the decisions that they made in their lives. 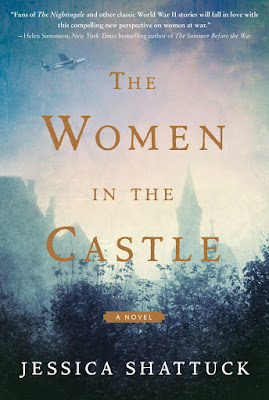 After the prologue, the novel begins in June 1945. Shattuck has shoehorned her fictional characters into the plot led by the real-life conspirator Claus von Stauffenberg, and the men who were in the study have been executed after that failed assassination attempt. Marianne combs Germany for their widows and children: she rescues Connie’s frail, young widow, Benita, from a Russian and the degradation of a mass rape den in Berlin that may remind readers of the harrowing A Woman in Berlin published anonymously by Marta Hillers (referenced by Shattuck) and later turned into a 2008 German film of the same name. Connie’s son, Martin, turns up in a children’s home. A resourceful Ania, another survivor from the war but not a widow of any of the conspirators – we never learn the fate of the other widows – is retrieved with her two sons from a displaced persons camp. All are brought to the castle to recover with Marianne’s three children.

Marianne hates the Nazis with the clear moral disgust she levied at them from the beginning, and she expects the same moral reckoning from everyone around her. But is that possible when every other major and minor character in the novel, apart from the young children, who lived through the Third Reich, is haunted by some act of commission or omission? As the circle of perpetrator or being complicit widens, I am reminded of the young lawyer protagonist in the 2014 German film, Labyrinth of Lies, who is driven to despair as he slowly realizes that the war criminals, notably a few notorious concentration guards, are merely the tip of the hidden depth. Almost everyone around him, including his own family, has an unsavoury connection to the criminal regime. Late in this novel, the daughter of a German soldier – a man who’d once loaded Jews into Treblinka-bound trucks – reminisces: “[a]s a German, she knows that if you start poking through a shoe box of photographs, you’ll find Nazi uniforms and swastikas and children with their arms raised in ‘Heil Hitler’ salutes.”

That sentence aptly captures one of the most compelling threads of the novel, since it applies in different ways to the two women who live with Marianne in the castle, and explains why they wish to withhold secrets from her. Throughout her life, Benita was indifferent if not hostile to politics. Even when she was a member of one of Hitler’s youth groups when she first met the dashing Connie Fledermann, she never took it seriously. She blamed politics for taking Connie away from her and even harboured ambivalent feelings towards him for abandoning her, not even telling her about his resistance activities. Politics was responsible for the ghastly sexual rapes she endured in the final stages of the war, assaults that deeply wounded her psyche, as well as her body, and almost destroy her. Shattuck is very good at delineating a convincing narrative for helping the reader to understand Benita’s outlook on the world. A very attractive woman, she came from an unloving peasant family and the single driving mission in her life is to seek out love, regardless that the object of her affection is a guilt-ridden man with a troubling political past. Maintaining a secret liaison and keeping it from Marianne eventually takes a heavy toll.

The third woman is Ania, a quiet and practical woman who also harbours secrets. She has made certain choices in her life both during the Third Reich and in the postwar era as she tries to forge ahead with a practical future for her two traumatized boys. She also chooses options that may be morally suspect but are understandable, given her need to survive and protect her boys’ welfare. Shattuck is empathetic towards both her and Benita, and tough-minded toward Marianne who, despite the solicitous attention she particularly bestows upon the childlike Benita, is occasionally rendered as self righteous, even shrill – qualities a reader can be assured would not appear in the flattering biography of her that is celebrated late in the novel. I wonder whether Shattuck is implying that a novelist has more freedom to create a more rounded portrait of an individual than a biographer who must rely on documents and interviews. It is safe to say that neither Benita nor Ania would have granted interviews.

It should be noted that the wrongs – if that is the right word – that haunt Ania in old age are more of omission than commission. True, she participated in several of the Third Reich rituals as did millions of others. But what really disturbs her is what she did not do during the war years when terrible things happened. Could she have done anything different that would have saved innocent young lives? Even when questioned about the choices she made during these years by her middle-aged American daughter, Mary, who was born after the war, she feels ashamed and unworthy of respect since she “lived her life wrong.” Yet as Mary acknowledges: “You take responsibility for your mistakes.” By contrast, I still vividly recall a chilling scene from the BBC series, The Nazis: A Warning from History in which an elderly woman is interviewed and refuses to take responsibility for informing on another individual who disappeared into the camps. Her response was basically that it happened a long time ago and she cannot understand why her interlocutor is dredging it up now, even though her offence was one of commission and not like Ania’s omission.

Shattuck’s character analysis of both Benita and Ania offers the reader more rounded portraits that help me at least to understand the formidable difficulties that individuals faced during the Nazi era and perhaps most importantly afterward, since the lives of individuals in the post-1945 era receive less attention. But I find Shattuck’s portrait of Marianne less convincing. Apart from a fleeting reference to Marianne’s childhood nickname “The Judge,” the author provides little insight of her that might explain both her admirable and her sometimes self-righteous adult behaviour. Unlike the other two women, Shattuck has little to say about Marianne’s wartime activities. She certainly did not suffer in the ways that the other two did. Her wealth and status – her husband descended from a long line of generals – likely shielded her from time in prison. Apart from an interrogation with the Gestapo, she escaped any punitive repercussions from the unsuccessful assassination of Hitler, and she admits to Benita that she was lucky. But is that all?

Nonetheless, Shattuck does provide a conflicted portrait of Marianne as she ages and recognizes the “moral blindness,” that caused her to interfere in the life of one of the women and to abandon the other. Despite my caveat about the author’s lacuna, Women in the Castle is an important book because it compels us to ask the question: given the terrible choices confronting these women and other minor male characters, how would we have responded? Would we have acted differently?
Posted by Robert A. Douglas at 12:24