Part One of this piece, which looked at recent Icelandic work, was published here on August 8.

Readers of Nordic noir may not have had much exposure to Finnish authors writing in the genre. This may owe in part to the lack of English translations but the oversight is gradually being remedied. Kati Hiekkapelto is a Finnish writer whom I have recently encountered and based on her latest, The Exiled, the third book in her series about Anna Fekete, and her previous foray, The Defenceless (both published by Orenda Books in 2016 and 2015), she is a writer who will likely acquire a larger profile. I have not yet been able to access her debut novel, The Hummingbird. 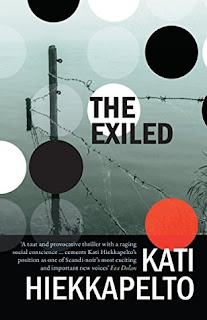 Born in Serbia of Hungarian ethnicity, Anna Fekete, along with her mother and brother, decamps to Finland to escape the Balkan wars of the 1990s. Eventually, they return but Anna stays, becoming, like her late father, a detective in the Finnish police service. Her experience as an outsider growing up there gives her an unusual insight into the immigrant experience, a thread that is woven throughout the two novels under review. In The Exiled, Anna is on holiday visiting her family and friends in a Hungarian village in Serbia.

The story opens with Anna out drinking wine, when her purse is stolen; the thief and a young girl in a red dress escape into the night. She reports the theft to the police and all too quickly – too quickly for Anna – a resolution is expedited. Her purse is found near the corpse of a male Roma by the river. The police say he drowned but, to satisfy her detective instincts Anna asks to see the autopsy. Quickly she notices the egregious inadequacies in the report and the indifferent attitude of the police. An old family friend, a fisherman on the river, shows her where the body was found. He also says that he saw the man’s corpse and doesn’t believe he drowned.

This brief summary only touches upon what Kati Hiekkapelto is exploring in The Exiled: police corruption, their contemptuous attitude toward the Roma, refugees as migrants, try to make their way into the EU, and their condescending attitudes toward women, even toward a foreign police officer. The setting is emphatically not Finland, where gender and ethnic equality are enshrined in law and the culture.

The Exiled is still basically a crime novel, as the social commentary never appears obtrusive but is integrated into the plot. Even though Anna is on holiday and enjoys a brief romance, she is restless and impelled to solve the crime because she feels it is connected to the murder of her father years ago. Almost everyone – the Serbian police, a local politician (a former colleague of her father and her mother) – attempts to dissuade her, believing that it is best to keep the past buried. Her mother is far more interested in pressuring her daughter to settle down and marry. However, with the assistance of one Serbian police officer and an email connection to a Finnish colleague, Anna overcomes the obstacles strewn in her unofficial investigation, arriving at a riveting conclusion.

What allows this novel to stand apart from other police procedurals is Anna’s empathy for the Roma and the stream of refugees who receive little support from the local Hungarians, an attitude that alienates her from her friends and family members. She witnesses the desperation, poverty and the hopelessness – some succumb to alcoholism – of those in the refugee camp as well as the anger, hatred and tension of the growing far right in the Hungarian and Serbian communities. She has every right to fear the fate of that young girl in the red dress. 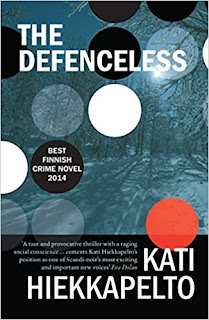 My enthusiasm for The Exiled motivated me to read The Defenceless, a story that is set entirely in a northern seaside city in Finland. Similarly to The Exiled, tensions surrounding refugees and immigration are the driving force. Anna is called out to investigate the murder of an old man, seemingly unrelated to her colleague Esko’s attempts to stop the a vicious gang from taking over the drug trade. But it does not take long for us to recognize that they are connected.

If the resolution of these cases was what constituted The Defenceless, it would be only a cut above a pedestrian police procedure and substantially inferior to The Exiled. But two qualities enhance the quality of the novel. The first is Hiekkapelto’s ability to sketch out a sympathetic account of the plight of a young and desperate Pakistani Christian, Sammy, who, after the death of his father and brother, fled Islamists, and yet he is denied asylum after living in Finland for two and a half years. He goes underground to avoid deportation, becomes ensnared by drugs and is drawn into crime to finance his addiction. (Spoiler alert.) When he is arrested for a crime he did not commit, he would rather plead guilty and spend years in prison than be deported as he figures that would be tantamount to a death sentence. (Don't look for an upbeat ending here, despite the best efforts of Anna to appeal his deportation.)

Secondly, Hiekkapelto is superb at providing a layered character study of Anna and her partner, Esko. When she is not working and demonstrating her police skills and human empathy, she appears vulnerable and lost – very different from how she is cast in The Exiled. She is unsure of where she belongs, torn between the community-centred culture of her birth and the standoffish nature of the Finns. She yearns for connection with a Hungarian au pair, even though the woman is a potential suspect and rightly rebuffs her. She has a tendency to drink excessively that can lead to awkward situations with men, including an unwanted pregnancy. Esko is more than the two-dimensional racist stereotype that his persona reveals at the outset, and Hiekkapelto’s portrait of him renders him almost a likable character who copes with physical pain yet denies it with bravado when he is with colleagues. He realizes that his long exposure to chasing vicious criminals has sanded down his humanity and hopes that he can retrieve some of it through a quiet retirement in the woods. The Defenceless is not on par with Hiekkapelto’s most recent novel, but as she continues to hone her craft, I expect that she will garner the respect and readership of the giants of Nordic noir.


Bordertown is an engrossing Finnish police procedural (on Netflix) that has a couple of twists. The main character, Detective Kari Sorjonen, masterly portrayed by Ville Virtanen, decides to leave the horrors of big city crime in Helsinki, moving his wife, who has battled brain cancer, and teenage daughter to his wife’s hometown bordering St. Petersburg. Sorjonen’s attempt to balance family and work – he initially insists on the family partaking dinners together without phone interruptions – recalls the American spy series, The Americans. But as in that series, the pressures of the job tip the balance away from the family as Sorjonen soon finds himself in the midst of a disturbing investigation involving teenage girls who remind him of his own daughter and ramp up his need to solve the murders. Secondly, Sorjonen possesses a flawless photographic memory that serves him (and us) well during the series as the camera allows us to see what he recalls. As a mnemonic aid, he constructs in his basement memory palaces with masking tape laid out on the floor. Dysfunctional and socially awkward (like the autistic female detective in The Bridge), but nonetheless likable, largely owing to the devotion he has for his family, Sorjonen has an extraordinary ability as a crime solver to the point that he almost overwhelms his new team, except for one member whom I will speak about below.

Unlike Case and Trapped, which each have one storyline, Bordertown has five of them with roughly the same characters and they overlap, since most of them involve female teenagers as victims. In the first three-part episode entitled “The Doll House,” a young teenage girl has been murdered and dumped by the side of a river, and another, Katia, has been abducted and drugged for the purpose of offering their semi-comatose bodies for sex with tourists. From almost the start we know the identity of the perpetrators; the drama is more interested in focusing on the dynamics of the investigative team and whether they can find Katia. Moreover, members of the business community and local politicians want to build a super-casino to attract Russian tourists. They are threatened by and fear Sorjonen's the skills and quietly seek to undermine him and his investigation, a thread that persists throughout the series.

In addition to Sorjonen, the other compelling character is Katia’s mother, Lena (Anu Sinisalo), a hitwoman and FBS agent in Finland who has burned her bridges in St Petersburg. She is pursuing her own investigation, has no qualms about circumventing the rule of law and is always a step ahead of Sorjonen’s team. Eventually the two meet and gradually forge a working relationship based on mutual respect so that by the next storyline she has become part of his team, and over the remaining episodes her contacts in St Petersburg, her physicality and her more aggressive methods with suspects prove at times valuable and complement his more cerebral and on occasion more reckless decisions. The tension between Finnish and Russian police methods is one of the interesting sidebars of the series.

I cannot conclude this review without briefly commenting on the final storyline, “The Endgame,” which comprises the tenth and eleventh episodes of this exhilarating series and perhaps is the best. Even though Sorjonen has expended energy trying to protect his kith and kin from the criminality with which he daily grapples, his daughter, Janina (Olivia Ainali), is arrested on a murder charge and the evidence appears convincing to the prosecutor. Sorjonen does apprehend another suspect and most of the last hour is the interrogation between a very adept Sorjonen and an exceedingly clever suspect who gives nothing away. Usually a new incriminating piece of evidence – forensic information, a new witness, a document – will emerge that will undo the suspect, but that does not happen here. Sorjonen has only suppositions – which we know are accurate – but no evidence for the suspect’s guilt. He must free the suspect and then something totally unexpected happens that I have never seen before. Perhaps the second season will explore the ramifications of this case, which I look forward to seeing.
Posted by Robert A. Douglas at 17:54