When the Scottish-born author, Philip Kerr, died of cancer last year at the age of 62, he left behind the manuscript of Metropolis which turned out to be the 14th novel in the Bernie Gunther series. Although he wrote several standalone novels and a children's fantasy series, he will probably best be remembered for the hard-boiled, iconoclastic Berlin detective turned private investigator.

The Weimar Republic, specifically 1928 Berlin, is the locale of Metropolis. The novel is a prequel to the series that began thirty years ago with the publication of March Violets set in 1936 Nazi Germany at the time of the Olympics. Interestingly, that time-span roughly matches the aging of the novels' cynical protagonist since Kerr's penultimate novel, Greeks Bearing Gifts takes place in 1957.
Metropolis has all the earmarks of  the Bernie Gunther novels: thorough historical research that illuminates rather than overwhelms the plot and characters, a sharp eye for detail, razor-sharp dialogue that will remind readers of Raymond Chandler's, Philip Marlowe, and interior acerbic monologue that is often at odds with his reassuring words that are largely driven by self-interest, at times sheer survival.

One of the pleasures of  Metropolis is discovering the young Bernie Gunther who despite four years in the trenches could still say “I’ve been lucky I’ve come through the worst of it with my soul still intact.” That sense of hopeful optimism would be severely eroded years later when he is forced to serve the SS in the killing fields of the Ukraine. But now in 1928 he still believes he can maintain his humanity and his belief in due process - although one method of interrogation he employs near the conclusion would never be permitted today in a democratic state  -  as he investigates his first criminal cases involving the grotesque murder of prostitutes and the execution-style murder of severely disabled veterans. 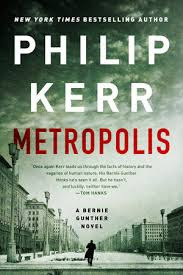 Another pleasure is Kerr's vivid depiction of the seedy, decadent and fanatical elements that flourished in Berlin: its virulent anti-Semitism, ideological street battles between ultra-nationalists and Communists, the uninhibited nightlife and the acceptance of eugenics expressed through the widespread belief that disabled veterans were worthless to Germany and that the murderous perpetrator should be celebrated rather than apprehended.
Perhaps most  memorial is the recreation of seminal real-life individuals that include German Expressionist artists whom Kerr pays special homage. Bernard Weiss, the legendary Chief of Berlin's Criminal Police invites Gunther to join his unit where he also works with Berlin's top detective, Ernst Gennat, purportedly the inspiration for the detective in Fritz Lang's M. Though Lang does not make an appearance, Kerr celebrates his masterpiece, Metropolis, which reveals a starkly divided city in which the prosperous thrive in the light while the down-trodden reside in the shadows, tableaux that mirror the real Berlin brilliantly brought to life in the Netflix series Babylon Berlin. Kerr does integrate Lang's wife, the screen writer, Thea von Harbou into the novel through exchanges with Bernie that provide insight into her husband and the thriller they are writing about the hunt for a murderer that will eventually become M. Kerr cleverly incorporates into the plot a confession from a suspect about a kangaroo court that closely mirrors the conclusion of  M.
My personal favourite recreation is the faithfully-rendered cameo appearance of George Grosz, an artist from the Dadaist movement. He is more pessimistic of the human condition than Gunther is at this time. He informs the detective that "my themes as an artist are despair, disillusionment, hate, fear corruption, hypocrisy and death." For anyone familiar with Grosz's oeuvre, those qualities encapsulate his drawings and paintings. Otto Dix, who, like Bernie spent four years in the trenches visually documenting the war, is also referenced. He too painted the lurid 1920s, one of which, the triptych, Metropolis, graces the novel.

Kerr's Metropolis is insightful and harrowing both in terms of the young Bernie and the city of Berlin. We know that both will change, in many ways for the worse, but Kerr has performed an extraordinary feat in his final novel. He has penned a riveting historical thriller populated with fascinating real-life personalities who will be negatively impacted by the malignant Nazis edging into focus. He also has delineated the character of the young Bernie Gunther as learns his craft revealing his investigative prowess, pragmatism and courage, qualities that will test his humanity in the later novels.
.