Portrait of a Survivor as a Young Man

“The past is intrinsic to the present, despite any attempts to dismiss it.” 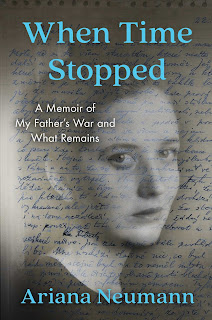 Ariana Neumann’s moving, beautifully-written memoir, When Time Stopped: A Memoir of my Father’s War and What Remains by Ariana Neumann (Scribner 2020) chronicles her search to shed light on the early secretive life of her Czech-born father, Hans, whom she remembers as an art-collecting, successful philanthropic business man. But her account is as much a mystery as a memoir because she combines the tools of both a sleuth and historian to unearth her father’s life.
Currently, a London based journalist, Ariana spent her formative years in a well-heeled home nestled in Caracas Venezuela. Although her father’s early life for her was basically a tabula rasa, she remembers awaking to her father’s screams uttered in a foreign language. He would say nothing about what provoked these nightmares and he discouraged her from asking questions. At that time, raised as a Catholic, she did not even know she was Jewish. Later as a college student when they both travelled to his homeland in Czechoslovakia, Hans revealed little, apart from a sob near an old railroad station: “Sometimes you have to leave the past where it is—in the past.” The underlying purpose of his daughter’s research and writing is to challenge that assumption. 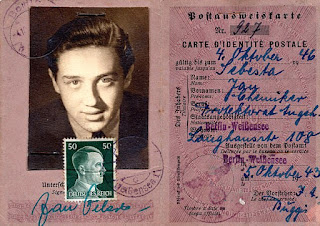 As a young girl, Ariana did discover a box of documents that included an ID card bearing the official stamp of Adolf Hitler with her father’s youthful photo, but the name and birthday printed on it weren’t his. It unsettled her, and she never saw the box again until her father’s death in 2001, when he left it for her to find. The process of meticulously investigating her father’s life and that of his family – the emails and phone calls to track down relatives of her extended family in Europe and America, the excavation of letters, diaries and artifacts and the interactions with a professional Czech translator – took almost two decades to research.

The dogged detective work to unspool the lives of her paternal grandparents, their two sons and the people in their lives is almost as fascinating as her enthralling narrative of her extended family during the 1930s that continues until the aftermath of the war. When she interrupts her historical passages with a few pages to recount a recent experience, it never feels disruptive; it only adds meaning and a rich layer to the memoir. For instance, when she learns that her paternal grandparents were sent to the Terezin concentration camp, Ariana, along with her immediate family, her mother and a historical expert, travelled to the camp about an hour’s drive from Prague. Her powerful description of their time spent at Terezin only deepens her understanding (and ours) of the harrowing experience of her grandparents relayed through her research, including their letters to their sons, a dangerous undertaking given that they could have been hanged. Ariana also discovers that the remarkable wife of her uncle, a Gentile, sneaked into the camp with a yellow star snitched to her coat to check on the health of her mother-in-law, Ella, an act of courage and compassion, given that Ella was the first member of the family shipped there.

Most people, who have taken a tour of Terezin that primarily concentrates on the 18th century fortress and offers a superficial overview of the town, will notice the stark contrast with the intensity of Ariana’s account. Although she rightly comments that the current town “feels mostly soulless, depleted,” she, with the assistance of a Czech scholar and her children taking turns holding her hands, is able to capture the overcrowding, hunger and desperation. For the vast majority who survived the misery of the camp, the Terezin ghetto was the last way station before being shipped East to their final destination.

Perhaps most memorable is what she learns about her father. As a youth, Hans was a dreamy, unfocused poet and prankster, late for any occasion. But his experience during the war years utterly transformed him. He received three times the dreaded “transport notice” that required him to report to the deportation office in Prague, but he contrived to escape, at first by squirreling away in a cupboard of the family paint factory, an ordeal “when time stopped.” He then borrowed a friend’s passport, posing as a Gentile and hid in plain sight by working as an industrial paint specialist in Berlin and a fire fighter who also found time to pass on information to the resistance. This material is vividly rendered in Hans’ own words from the documents he left behind in the box for his daughter to retrieve. The details about living and working behind enemy lines is astonishing revealing how resourceful, courageous and lucky he was to have survived not only the Nazi horrors but the Allied firebombing.

For the rest of his life Hans was “obsessed with time and punctuality;” he owned 297 pocket watches, which he repaired himself. Whenever he attended a social function in Caracas, he defied convention by showing up promptly on time rather than being an hour late. As a little girl, Ariana formed a detective club with her friends. That experience served her well in writing this extraordinary book, part family memoir and part mystery detective tale.