“Society is still worth protecting, don’t you think? Maybe now more than ever.” 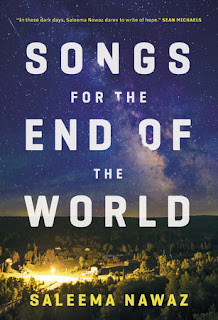 Almost two months ago, the Montreal writer, Saleema Nawaz received considerable attention in the Canadian media for her novel Songs for the End of the World, about a respiratory pandemic ravaging 2020 America that bears startling similarities to the current COVID-19 Virus. Among them: the devastation of New York City from a mysterious infectious virus that originated in China; the inconvenience of self quarantines; the individuals on the front line – police and health care workers – risking their lives to save the lives of individuals afflicted with this virulent pathogen; the need for personal protective gear; social distancing ordinances; conspiracy theories posted on social media, and anti-Asian hate crimes. The novel took six years to research and write, and Nawaz’s imagination, combined with her knowledge about previous pandemics from the Spanish flu (1918-1920) to SARS, is etched into her narrative. Still, given her prescience, it is unsurprising that Songs, scheduled to be published in late August, was rushed into an e-book in early April.


But as compelling as Nawaz’s description of the impact of the virus upon individuals and society, Songs has much more to offer as she shifts back and forth in time from 1999 to the months of the pandemic. Beyond being a reflection of the current zeitgeist, the novel raises interesting and provocative issues. Are acts of kindness and service more important than words? Can a novel about a plague written years earlier by one of the novel’s characters, enlighten or merely tantalize the public? What does philosophy, a central focus of one chapter in a university setting, have to offer public discourse during a pandemic over twenty years later?  Nawaz also considers whether the seduction and benefits of lengthy sea travel on a private yacht outweigh the perils, and whether the power of song can offer a balm to individuals during a pandemic, music in this instance that was first performed by a rock group at a Vancouver benefit concert, that gathering triggering a wave of infections with subsequent tragic results.

Perhaps her most universal subject is the value of human connection: the power of parenthood, notably mothers with young children but also an aging academic attempting to overcome antipathy with an alienated daughter. But she also charts the attachment between two sisters forged at sea when they were young girls that has grown into a bastion of emotional support during the pandemic even though they live oceans apart.

If the trajectory of films and other novels about pandemics often portray a society surrendering to despair or panic as fear engulfs their lives, Songs is a rich character study that avoids apocalyptic scenarios without minimizing the searing scenes that happen at a hospital. Nawaz signals her priority when she affixes the name of a character as a chapter title. One of them is the writer/celebrity, Owen, who ultimately feels guilt about his trysts and lies, that ended his marriage and any further connection with his ex wife.

The centerpiece of Songs are the lives of two individuals, Elliot, a New York police officer and his sister, Sarah, who is raising a child on her own, that highlights the unbreakable bond the siblings have with each other. Sarah’s life was derailed for years by possibly misplaced guilt stemming from a college incident. Elliot who feels he is flawed because he ended a relationship in college and had a failed marriage. Yet Nawaz portrays Sarah and Elliot as compassionate individuals who demonstrate courage and generosity. Through these characters Nawaz offers hope about how it is possible to behave responsibly during a pandemic.

Nawaz also adds another touch that I can only describe as her reworking of the six-degrees-of-separation, namely that every character in the novel is connected through a chain of circumstances to almost everyone else. A major character in one chapter can appear briefly then again in another context and time period, that enables the reader to see that character in a different light. To take one example, a young Asian waitress briefly meets an off-duty police officer, a seemingly inconsequential event, except it will ignite a cascade of consequences that flare up throughout the novel affecting every character directly or indirectly.

In sum Songs can be read as a vivid mirror of our time as we cope with the corona virus but its more enduring appeal is how Nawaz reveals the complexity of individual lives and how people can behave with decency as they make difficult choices during a time of crisis.