This selection was originally designed for my chapter on The Imperialist Impulse and its Costs in That Line of Darkness: The Shadow of Dracula and the Great War, Encompass Editions, 2012 but was excluded for reasons of space.


The social construction of masculinity underwent a kaleidoscopic shift in the late nineteenth century. Where formerly power was based on respect rather than fear, and learning and sensitivity were valued (a la David Copperfield), after 1870 manliness was grounded in athletic prowess, physical courage and good form. To be manly was to be wary of any sign of emotional tenderness, cultivated affectation, or overdeveloped intellect in another man. The Greek body was still valued but in lieu of “the soul of a Christian knight,” there emerged an aggressive, muscular ethos that reflected a Darwinian assumption that life was intensely competitive among both one’s peers and between Britain and the rest of the world. Personal and imperial strength cohered as a result of struggle and the acquisition of a physical and mental toughness. Character took priority over intellect: grit and pluck could tackle any problem. Its resolution must above all avoid a pause for self-reflection because it suggested "morbid" soul searching and dithery inaction. Instead, team sports such as football and rugby were valued because they fostered fair play and sportsmanship, de rigueur for building character, the paramount goal of the public schools. Robert Baden–Powell, the founder of the Boy Scouts, wrote that football was “a grand game for developing a lad physically and morally, for he learns how to play with good temper and unselfishness, to play in his place and “play the game,” and these are best training for any game of life.”


This overriding emphasis on sport as the builder of character set up the polarities between good and evil, courage and cowardliness, freedom and slavery. The Rev. J.M. Wilson at Clifton College, Bristol presented his students with a dramatic choice. “It has to be settled whether you are to be your master or slave; whether your body shall be kept under, and you will be strong enough to rule it; or whether your body shall be the target.” Besides suggesting the dangers of auto-eroticism, the implication is that masculinity demands an aggressive toughness that could only develop if a boy learned from and endured a school culture that tolerated indeed encouraged, physical and psychological sadism. The subjection of these boys to “systematic brutalization [was] not the incidental price of ‘a good education’ [it was] the point” (the emphasis is in the original).  The public schools, as the "nurseries of empire," cultivated a meaning of manliness that valued being "normal." Although the schools provided the most intense emotional ties of childhood, the homophobia of that environment “precipitated sexual ambivalence, frustration and a predisposition to sexual brutality.” The bullying and social exclusion that was part of this school culture demanded that there be nothing “odd” about a fellow. The price of fitting in often meant that he learned to toady to others regardless of his true feelings. Were a young fellow to emerge from this experience with stoicism and a stiff upper lip and having demonstrated the capacity to repress pain and emotion, he could call himself a man who could dominate others. Instead of cultivating intellectual excellence and the capacity for independent thought, “the new breed of public school headmasters [valued] physical exertion [as] a spiritually cleaning catharsis; the sports field the ideal antidote for degeneracy and decadence.” As if to demonstrate that sport could overcome a student’s wan mettle, one headmaster declared, “I have never known a genuine rugby forward who was not distinctively a man.” The modern scholar, Michael C. C. Adams, characterized late Victorian manliness as “virulent anti-intellectualism, obsession with sports, stultifying conformity to team and social rules, callousness to the less fortunate.” 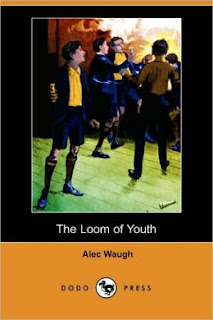 In his autobiographical novel, Loom of Youth Alec Waugh confirms Adams withering judgement by pillorying the dominant athleticism and rampant anti-intellectualism in the tony public schools. Published in 1917, the book generated a firestorm prompting an ex-headmaster of Eton to pen a ten-page rebuttal while a critic predicted the novel would become the Uncle Tom’s Cabin of the public schools. In Waugh’s critique, would-be scholars are treated as milksop pariahs, macho roughhousing is condoned, corporal punishment frequently dispensed, and the obsession with sports, outweighed everything else. In the physical robust but intellectually impoverished environment, the school produces a boy who is “pleasure loving and absolutely without conscience…has learnt to do what he is told, and takes life as he sees it and is content.” In view of his recently discovered love for poetry, the protagonist Gordon, albeit a superb all-around athlete, believed that the institution needed a major overhaul in its priorities. In a withering indictment of its values before the debating club, he articulates his new outlook:

No one works at a Public School. People who do are despised. If they happen to be good at games, they are tolerated. It is a condemnation of the whole system….We all enjoy games. I love cricket; but that does not make me worship it….Some fool said that ‘the battle of Waterloo was won on the playing fields of Eton’; and a fool he was, too. Games don’t win battles, but brains do, and brains aren’t trained on the footer field.

Implicit in his harangue is the unfair criticism that the overriding importance of athletic competition in the Public Schools was responsible for Britain’s lack of military preparedness for World War Ι. He was on firmer ground when he suggested that the exaltation of the sports ethos with its need for physical and mental toughness, and doing one’s bit for the team atrophied intellectual acuity, a state of mind that may have been necessary for enduring the hardships of the trenches. Criticism toward the book and its author continued for a decade and would have been more corrosive had Waugh decided not to play the game with frontline service as a machine gun commander in France where he was captured and imprisoned in March 1918 until the end of the war.

Notwithstanding Waugh’s literary biopsy of the public school ethos, more persuasive to the public was the Darwinian argument that aggression was inborn, that there existed a ”deep reservoir of savage desires and instincts–passions, which men needed in order to be men, to struggle, survive and dominate.” Advocates for this hardier version of manhood “feared that civilization had so fully repressed their passions that their very manhood–their independence, their courage, their drive for mastery was being stifled.” According to military historian, Sir Michael Howard, “for the best part of a hundred years, war did indeed ‘define masculinity’ in British society. War was a test of manhood.”  The view that the war would enhance ‘moral fibre’ was an integral part of the Darwinian ethos of the age that had been inculcated into the public schools with its “unquestioned hierarchy, competitive games, and organized bullying…a combination of qualities that reached their apotheosis on the field of battle.” Inspired by events in the Sudan, the often cited, and at the time, very popular poem, “Vitaï Lampada,” (The Torch of Life) by Henry Newbolt captures the equation between games and war:

The sand of the desert is sodden red –
Red with the wreck of a square that broke;-
The Gatling’s jammed and the Colonel dead,
And the regiment blind with dust and smoke
The river of death has brimmed his banks,
And England’s far, and Honour a name,
But the voice of the schoolboy rallies the ranks:
‘Play up! play up! and play the game.
Posted by Robert A. Douglas at 12:40