Zola and the Perils of Degeneration


Originally when I conceived of what turned out to be the first volume, That Line of Darkness: The Shadow of Dracula and the Great War, Encompass Editions, 2012 my intent was to compare the British discourse on degeneration with the French scientific community and its literary figures, but it was excised for reasons of space. The following selection is part of that discourse.

The work of certain medical practitioners, notably the French physician, Benedict Augustin Morel refracted the anxieties that beset Europe from the 1840s to the end of the First World War. Morel was convinced that "bad heredity" could have catastrophic effects for the future. As the chief medical officer at a lunatic asylum near Rouen, he was alarmed by the apparent increase in the number of cretins, alcoholics, and unfit military recruits. Appalled by the high infant mortality rate and the horrible living and working conditions of the dye workers in Rouen, which included work with noxious substances, he posited the idea of modern society being the source of certain poisons, exposure to which could result in lesions on the brain. The toxins included diseases, such as tuberculosis and syphilis; illnesses due to environmental industrial wastes and tainted food; injuries, such as accidental blows to the head; and substance abuse from tobacco, alcohol or drugs. He published a medical treatise on degeneration that connected heredity, environment and racial decline and believed that the origin of degeneration was rooted in defects acquired by one set of parents that were transmissible to succeeding generations. The symptoms of the first generation of the tainted family could be relatively mild but it was inevitable that it should pass through this “seed” to the next generation. Given his daily clinical contact with individuals suffering from alcohol abuse, the hereditary predisposition for Morel was compelling: “I receive insane patients daily [at the hospital], in whom I can trace back the origin of their malady to nothing else but the habitual intoxication of their parents.” With each set of new offspring, the dose of pathology promised to be magnified so that the extinction of families was guaranteed: within four generations of the original taint to madness, sterility or the guillotine was the inevitable end.

Morel conceived of these isolated cases of degeneracy as part of a much more widespread problem threatening environmental degradation and perhaps evidence of the racial decline of France. Adaptation to bad conditions made people and their offspring even worse and by the time an individual had become a lunatic or a pathological criminal, there was little that could be done. If this uncontrolled reproduction of degenerates was to be brought to a halt, Morel believed that the emphasis had to shift to changing the social conditions responsible for the spiralling regression.

There can be little doubt that Morel’s experience was a microcosm of a national problem: France had the highest per capita consumption of alcohol in Europe.  But if his was the understandable human response from of an overwhelmed physician, he was clearly feathering science with religion. The burden of Morel’s practice was lightened only by his religious beliefs, namely that the race of man had declined from the Edenic perfection of the first couple, and the maladies he treated were a form of divine punishment for some “original sin.” 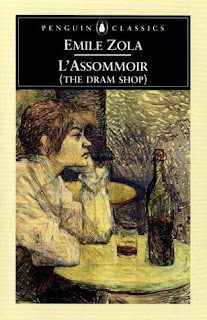 As one of the founders of literary naturalism who regarded his work as a form of scientific research, Emile Zola provided a wider audience for the ideas of Morel. In his twenty-novel saga of the Rougon-Macquart family (1850-1870), he tracked the trajectory of a bloodline’s genetic history, the perils of degeneration and a search for palliatives that had already become a dominant fixture in the national discourse. Set during the Empire of Napoleon ΙΙΙ  L’Assommoir (The Dram Shop 1877), Zola explores how the interplay of environment and heredity combines to defeat a couple who are the descendants of a family tainted with emotional instability and criminal violence. In a powerful evocation of the unaesthetic and unsanitary slums of Paris where alcohol and promiscuity offer diversion in an otherwise bleak existence, the male protagonist descends into sloth, casual sex, and alcoholic oblivion after he badly breaks his leg in a fall from a roof. During his hospital stay, his tremors reach the point where soup and water taste like scalding brandy and he is beset by images of bats and rats. Looking for signs of a genetic predisposition to alcoholic abuse, the specialist in a brusque manner asks his wife:
‘Did this man’s father drink?’
‘Well, Sir, a bit, just like everybody else…. He lost his life in a fall from a roof, one day
when he was tight.’
‘Did the mother drink?’
‘Well, of course, Sir, like everyone else, you know, a drop now and again…. Oh, but it’s a very respectable family….There was a brother who died very young from convulsions.’
The doctor looked at her with his piercing eyes and went on brutally:
‘And you drink too?’
She floundered and protested, put her hand on her heart to pledge her sacred word.
‘You do!  Well watch out, you see where drink lands you. One of these days you’ll die in the same way!’

Although the doctor’s interrogation may appear unduly harsh to the modern reader, the questions that Zola has him ask are understandable in light of the increasing medical evidence about the corrosive effects of inherited alcoholism. Besides demonstrating how alcoholism intermeshed with environmental degradation, he also reveals that once destructive behaviour becomes engrained, individuals are prisoners of their genes: the script for their lives has already been written. 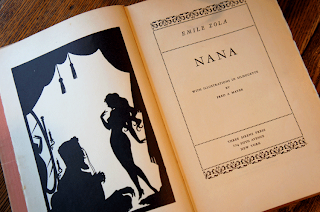 His novel Nana (1880), about the brief life of a courtesan, who is the daughter of the alcoholic protagonist of L’Assommoir, is a good example of the writings of alienists of the day.  Zola  cautions readers that women with a tainted heredity were particularly vulnerable to moral and physical degeneration in which the symptoms and the causes were more moral and physical because the life cycle in the female body rendered them women more susceptible to instability and disease.  He tracks the career of the titular protagonist, the daughter of the blighted couple of L’Assommoir who rises above the mire of her early childhood to become a fabulously wealthy courtesan. As a three-year-old, Nana had distracted the attention of her father working on a roof, which caused him to lose his grip and to fall, badly damaging a leg and triggering his descent into alcoholic oblivion. Zola is implying here that her father was her first male casualty. Throughout her relatively short life, she uses her sexuality as a weapon to destroy men and wreak revenge on the pleasure-seeking plutocracy, who, while awash in money and willing to pay any price for sex, ignore the devastation of the poor struggling to survive in a hardscrabble environment:

[Nana was] the offspring of four or five generations of alcoholics, her blood tainted by a    long heredity of deep poverty and drink, which in her case had taken the form of unhinging the nervous balance of her sexuality. She’d been brought up on the streets in a working-class Paris slum and now, a tall and lovely girl with a magnificently sensual body, like a plant flourishing on a dung-heap, she was avenging the poor; underprivileged wretches from which she’d sprung. While the people were left to rot in degrading circumstances, she would carry this pollution upwards to contaminate the aristocracy. She was turning into a force of nature and, without any intention on her part, a ferment of destruction; between her plump white thighs, Paris was being corrupted and thrown into chaos.

Nana may have been the symbolic instrument for the destruction of those that benefited from the authoritarian regime of Napoleon ІІІ, but Zola is also suggesting that she too is the victim of a biologically predetermined degeneracy that must run its inevitable course. It is significant that her final illness, in which the disease leaches the beauty out of her body leaving her corpse-like even before her death, coincides with soldiers leaving for Prussia, a military campaign that within three months will spell the demise of the Empire. Rather than alcohol being the agent of her deterioration (although she imbibes freely), it is the misuse of her sexuality that triggers the latent seed of pathology. Given the hothouse atmosphere of the popular musical stage, where Nana performs virtually nude and the pungent sexual aroma backstage and in her dressing room, it follows that her downward spiral accelerated in this environment. A recent historical study seems to confirm the contemporary mindset, showing that doctors of the day cautioned that women were particularly “vulnerable as a consequence of tainted heredity and/or because…their most intimate environment, that is, their bodies rendered them recurrently susceptible to instability, if not disease.” Zola illustrates throughout Nana and the Rougon-Macquart family saga how degeneration had a fatalistic quality that rendered his characters increasingly helpless to make other choices, which could have provided an antidote to the plummeting misery of their lives.
Posted by Robert A. Douglas at 12:49