This, the second of three postings on Russia and the Ukraine,  is an update of the brief  overview on Putin profiled in That Line of Darkness: The Gothic from Lenin to bin Laden (Encompass Editions, 2013)


Democracy is a “façade…where substance is forgotten for the sake of shocking statements and mutual accusations, where real politics is reduced to shady deals and decisions made behind the scenes but never discussed with voters.”
—Vladimir Putin cited by Gregory Feifer in Russians: The People behind the Power

Putin’s disdain for so-called “Western-style democracy” derives in part from his experience as a KGB officer during the last year of his four-year stint in Dresden in 1989. There he witnessed mass street protests and the ransacking of the headquarters of the Stasi, the East German secret police. From a distance, he noted with fear and horror the changes that were taking place in the Soviet Union under Gorbachev. Like his hero, Yuri Andropov, the longest-serving KGB boss in Soviet history (1967–1982) and who was in Hungary during the 1956 revolution, Putin believed that any talk of democracy leads to demonstrations, and protest leads to disorder and attacks on the Chekists, (the name given to Lenin’s security police during the 1920s and currently revived as a badge of honour). Better to nip it in the bud before it grows any further and becomes a threat to the state. People need to be disciplined, manipulated, kept in the dark and bought off with better wages and pensions.

Appointed to the head of the F.S.B in 1998—the post-­Soviet successor to the K.G.B.—in large part because he courted and won the necessary support from Boris Yeltsin’s “Family,” he wasted no time in consolidating his position and making himself the appointed heir to Yeltsin. In 1999 there were a series of bombings throughout Russian cities, separatists Chechens were blamed and the bombings were used as a pretext for launching the second Chechen war that turned Chechnya into rubble. The war launched Putin into the presidency despite the considerable evidence that a foiled apartment bombing in the Russian city of Ryazan may have been staged by F.S.B. agents. Even Russians, who believed that the security police played a role in the attacks, voted for Putin.


Putin’s fear of and his deft exploitation of the Russian fear of disintegration, chaos and anarchy helped to bolster public support for him since most people believe, apart from its small Europhile elite, that strong-armed order is more important than anarchy or even rooting out corruption. Putin went to extraordinary lengths to paint the 1990s as a period of chaos and criminality. His almost visceral fear of demonstrators was evident in the success they achieved during Orange and Rose revolutions in the Ukraine and Georgia respectively. Much more threatening was the 50,000 people, probably the largest opposition demonstration in Moscow since 1991, who on December 11, 2011 showed up on Bolotnaya Square to protest the falsified election results of parliamentary elections held a few days earlier. International and domestic observers contended that the elections were tainted by ballot-stuffing and fraud on behalf of Putin’s party, United Russia. Another factor contributing to the large turnout was Putin’s announcement in September that he would run for the presidency again in March after serving a term as Prime Minister. His overwhelming electoral victory enabled him to consolidate what many have called Putinism, a petrol-fueled kind of ersatz democracy that combines authoritarianism with nationalism.

In the spirit of his K.G.B. background, Putin  has genuinely believed that opponents are sinister agents of foreign powers. He doesn’t just object to the liberal political system they support, he believes they are plotting to “usurp power” and hand the country over to rapacious outsiders. His strategy was to demonize the protestors and subsequent critics as a “pathological minority” who are held up as a contrast to a “healthy majority”—a strategy that is similar to that deployed by Joseph Goebbels in Nazi Germany. Every time this happens, his popularity increases given that his conspiratorial worldview reflects the beliefs of most Russians. Throw into the mix a financially lucrative resource economy wherein pensioners and the working class, who benefitted least from the Yeltsin years, are among his most devoted supporters. No wonder his personal popular support is over 80 percent.

Putin’s popularity is in part the result of his PR man, Vladislav Surkov known as the puppet master, a preternaturally skilled political operator (even though he was briefly dumped from power in the spring of 2013 only to be brought back to manage the  propaganda campaign against the Ukraine). He has been the shadowy ideologue and strategist, the principal architect behind the concept of “sovereign democracy,” in which democratic institutions are maintained without any democratic freedoms. I wonder whether he had anything to do with Putin’s penchant for presenting himself in photo-ops as a kind of bare-chested, horseback-riding, scuba-diving national superhero. Surkov was the key adviser on the Russian propaganda campaign against the Ukrainian government and the referendum in Crimea and earlier launched a pro-Kremlin youth group that can be compared to the Hitler Youth who beat up foreigners and opposition journalists. When Surkov was one of the individuals sanctioned by the Obama administration for supporting the Crimea referendum, he mocked “Comrade Obama” by indicating that he has no assets abroad to freeze and he does not need a visa to indulge his interest in American pop culture.

Surkov makes a brief appearance in Lise Birk Pedersen’s 2012 Danish documentary film, Putin's Kiss, that profiles the Russian youth activist Masha Drokova and her experiences with Nashi, a nationalist youth group with ominous fascist tendencies—mass rallies book burnings and thuggery—to counter liberal opposition to the Putin regime. A tireless Nashi activist who once collected a kiss from Vladimir himself on TV, Drokova was awarded a medal of honor from the president in 2007, attended a top university, and even had her own TV show, a real credential in a nation where the airwaves are strictly policed by the ruling party. More of an idealist more than an ideologue, her growing friendships with liberal journalists—particularly the muckraking Oleg Kashin, who appeared as a guest on her show—pulled her from the far right toward the center, alienated  by Nashi’s hooligan and violent tactics.

A key event in Putin's Kiss is the savage November 2010 attack on Kashin, which was captured on silent surveillance video and flashes on-screen twice in the movie, to bloodcurdling effect. Kashin suffered a broken jaw and multiple skull fractures, and the attack prompted an eight-day sign-carrying campaign around Moscow. Drokova showed up on the third day to be photographed with a sign reading, "I demand that those responsible are brought to justice." Unsurprising, the crime is still unsolved, but as Kashin puts it in the movie, "I have no doubt that the attack on me has a Nashi trace." Given this youth group’s ruthlessness and vindictiveness, there is little doubt that he is right.

What happened to Kashin was merely one expression of the draconian treatment suffered by Putin’s critics. On February 21, 2012, five women belonging to the feminist punk rock protest group, Pussy Riot, staged a performance, a mere 40 seconds, at Moscow’s Cathedral of Saint Saviour and performed a “Punk Prayer” beseeching “Mother of God, to “get rid of Putin.” The church was empty  yet the posted footage of Pussy Riot’s orange-purple-and-yellow-balaclavaed figures in their gaudily mismatched dresses, prancing, kick-boxing and fist-pumping against a gilded backdrop of Russian Orthodox saints was to become a world-famous icon of protest art. And six months later, when three of the original Pussy Riot performers were tried and two of them were sentenced to two years’ hard labour for the bizarre crime of “undermining the spiritual foundations of the state,” Putin said that they "got what they asked for." They served over a year in a labour camp.

Since the Ukrainian crisis, given the Kremlin's aggressive, irredentist patriotism, the stakes for critics of Putinism have been much higher. Andrei Zubov, a history professor at the Moscow State Institute of International Relations was fired after writing an op-ed comparing the annexation of Crimea to Hitler’s annexation of Russia. In the letter that Zubov received, the university authorities noted that his op-ed article “contradict(s) Russia’s foreign policy and inflict(s) careless, irresponsible criticism on the actions of the state, thus causing damage to the teaching and educational process.” The dismissal should come as no surprise since in his March 18th national speech, Putin raised the spectre of “a fifth column,” who are a “disparate bunch of national traitors.”

The political climate in Russia is currently so corrosive to any expression of criticism that a new Web site called predatel.net—the word means “traitor”—has been launched featuring a list of public figures that the site’s anonymous creators deem to have betrayed Russia, whether by criticizing the annexation of Crimea or by supporting Western sanctions. When the Duma approved the annexation of Crimea, on March 20th, only one deputy, Ilyal Ponomarev, voted against the measure by launching a military action, Putin has driven Ukraine into the arms of NATO and ensured that Ukrainians will oppose any union with Moscow. He is being vilified by the state media for his principled stand. He infuriated his fellow legislators by casting solo votes against a ban on international adoptions and anti-gay legislation—that has escalated homophobic violence, arrests, suicides and the proliferation of vigilante groups in Russia, who want to hunt out gays and lesbians online. His colleagues hope that Ponomaryov will break under the incessant pressure and will decide to emigrate. 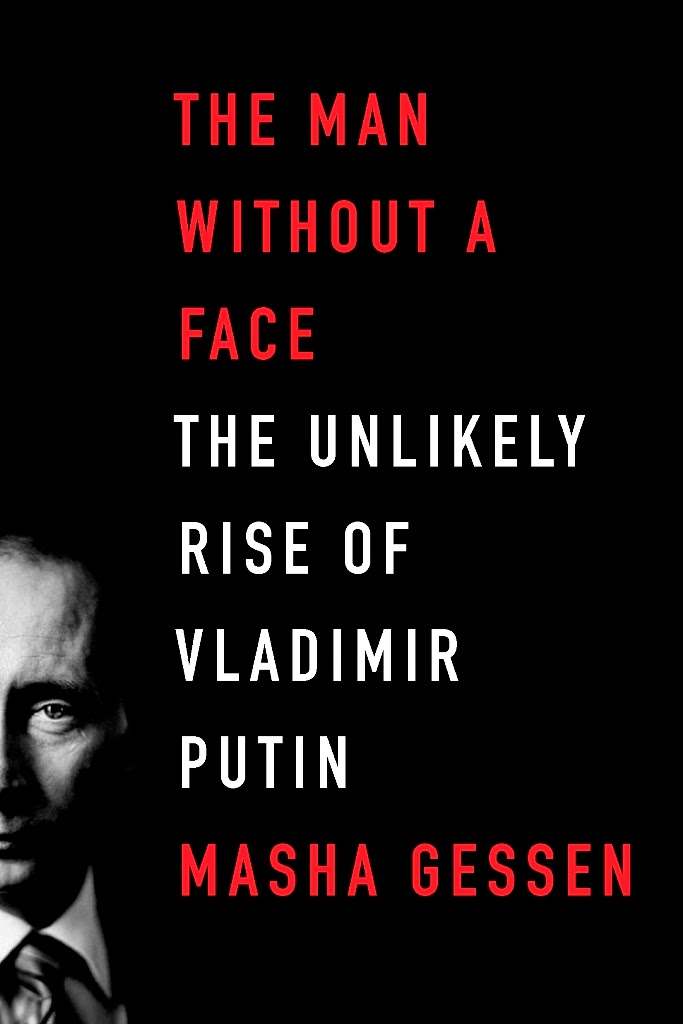 One journalist that has been driven from Russia is Masha Gessen, a Russian journalist, who is not only a vociferous critic of Putin, but as a lesbian with adopted children, she feared that they would be taken from her. She is the author of the 2012 The Man Without A Face: The Unlikely Rise of Vladimir Putin. Her provocative thesis that Putin is an unremittingly malevolent figure, "the godfather of a mafia clan ruling the country," who parcels out Russia's juiciest economic assets to his cronies and presides over the murder of his political opponents. He is also a mediocrity: "a small, vengeful man," a "thug," puffed up by Soviet-style propaganda artists into a savior of the Motherland. Admittedly, her highly readable book is marred by a lack of evidence for her contention of Putin’s involvement in a number of catastrophes—among them the 1999 bombings and the 2002 Moscow theatre siege where 129 people died under circumstances that would suggest was to some degree the tragedy was an inside job (a theory first advanced by Anna Politkovskaya, a heroic journalist murdered in 2006)—which he used to consolidate his power. Although unproven, her arguments are probably true or at least plausible. And the more we are coming to learn about Putin since the Crimean crisis last March and the subsequent mass murder of civilians in July—the uber nationalist, brazenly defiant, the projection of menace—the more Gessen’s portrait of him comes into a sharper focus. The question now is how should the West respond, the subject of the next blog.
Posted by Robert A. Douglas at 22:26