The Power of Art in Fear and the Muse Kept Watch

This review originally appeared in Critics at Large July 18/15 and its relevance to this site I think should be obvious given that six chapters in That Line of Darkness: The Gothic from Lenin to bin Laden (Encompass Editions, 2013) are devoted to the Soviet Union. 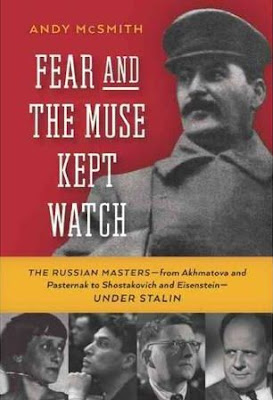 In the introduction of Fear and the Muse Kept Watch: The Russian Masters – from Akhmatova and Pasternak to Shostakovich and Eisenstein – Under Stalin (The New Press, 2015), journalist Andy McSmith, reminds us that the purpose of George Orwell’s classic 1984 was to demonstrate how the creative life was crushed out of the people, leaving them incapable of free thought and acting like robots. By contrast, McSmith argues that Soviet citizens, who absorbed great drama, music, film, novels and poetry, could not be turned into robots even under the machinery of Stalin’s terror. They would outwardly conform but they remained sentient beings who needed and appreciated great art. As a result of the Revolution, a vast more number of Soviet citizens were exposed to the arts, especially theatre, because of that hunger. This is an intriguing thesis, one that I agree with, though I am not certain that the author has proven it. At times he does provide convincing evidence, but he leaves it to the reader to make the connections.

I do not want to suggest that Fear and the Muse is devoid of intellectual pleasures. On the contrary, one of its great strengths is that it comfortably shoehorns these artists and their art into one book. Too often, cultural life is relegated to a single chapter in Soviet histories, confined to biographies or specialized monographs on one of the arts. Instead, McSmith combines astute biographical profiles with perceptive insights into their art and how both were related to the larger cultural and political climate of the time, especially given that Stalin paid considerable attention to the arts. There is not much that is new here, and he ignores the role of the visual arts, but McSmith’s major accomplishment has been to synthesize in lucid prose a great amount of material from secondary sources and translated Russian correspondence. One bonus is that he is self-taught in Russian, and some of his more memorable quotations occur when he quotes from untranslated Russian correspondence.


With one conspicuous exception, McSmith provides sympathetic readings into the most celebrated Soviet artists: filmmaker, Sergei Eisenstein; poets Vladimir Mayakovsky, Osip Mandelstam and Anna Akhmatova; dramatist and novelist, Mikhail Bulgakov; short story writer, Isaac Babel; poet and novelist, Boris Pasternak; novelist, Mikhail Sholokhov; and composers, Dimitri Shostakovich and (though to a lesser extent) Sergei Prokofiev. That one exception is his deservedly excoriating overview of the life of Maxim Gorky, who began his checkered career as a dramatist by portraying workers as intelligent human beings, then became a supporter and critic of the Bolshevik Revolution and finally debased himself by becoming an abject apologist for the worse excesses of Stalinism. Although this story is not new, McSmith’s narrative rightly underscores Stalin’s skill in exploiting men’s weaknesses, and that for Gorky was his receptivity to flattery and his desire for material comfort.

One of the pleasant surprises is the author’s treatment of Sholokhov, Stalin’s favourite novelist. I had always regarded him as a toady, but McSmith provides evidence that he struggled to reconcile the tension between preserving his integrity as an artist and being an approved Soviet writer. Moreover, he leveraged Stalin’s patronage of him to assist the starving peasantry in his region as the result of rapid collectivization. Stalin insured that grain supplies were sent to the area. Sholokhov also helped friends whom he felt were being wrongly persecuted by corresponding with and personally meeting with the Soviet dictator to plead his case, and it worked; people were released from prison and returned to their old jobs.

Securing Stalin’s support is one of the threads woven throughout Fear and the Muse.When Bulgakov turned his Civil War novel, The White Guard, into a play, Ukrainian writers appealed to Stalin to ban performances not only because the drama was sympathetic to the White cause but because Bulgakov demeaned Ukrainians, Stalin resisted because he admired the play and, according to McSmith witnessed fifteen performances. Eventually, Stalin acceded to their demands and banned all of the author’s plays depriving him of theatre work. Bulgakov sent a letter to Stalin requesting that he be allowed to emigrate. To his surprise, Stalin phoned him, a call ensured him of paid employment. That patronage would likely not have been secured had the Soviet authorities known that Bulgakov was secretly writing a novel that he correctly knew would never be published in his lifetime, his surrealistic and wickedly satirical The Master and Margarita.

Pasternak also received Stalin’s support after the author received a phone call from the dictator seeking his opinion of the poet Mandelstam, who had been arrested for writing a lacerating poem about Stalin, the mountaineer in the Kremlin with his “fat slug fingers greasy as dirty plates.” Pasternak was appropriately vague about his fellow poet, with no hint that he was aware of Mandelstam’s poem, a response that ensured his life would be for the time saved and that he had secured the patronage of the dictator. Although McSmith does not mention it, when Pasternak’s name did appear on a death list, Stalin ruled that the poet should not be touched. But Pasternak did not know this and he continued to display uncommon courage by extending condolences to individuals whose spouses had disappeared, offering sums of money to fellow poets who were deprived of work and refusing to denounce fellow artists.

Eisenstein never acquired that patronage, but he did establish an international reputation, another safety protection, because of the films he directed, especially the landmark Battleship Potemkin during the relative liberalism of the 1920s. But because of Eisenstein’s artistic and financial fiascoes in America and his sexual escapades in Mexico, he did not endear himself to Stalin. Yet when he made the incomparable Alexander Nevsky, Stalin, who supervised every aspect of every Soviet film, made no changes to this film, the only time that ever happened under Stalin’s watch. That success could not have prepared him for the intense pressure that he received while making Ivan the Terrible. Although Part One was released in 1945 with only minor changes, Stalin and his entourage were belligerent about Part Two, Stalin calling it “vile.” The strain from the Kremlin’s hostility contributed to Eisenstein suffering a heart attack and then dying less than a year later, never seeing his film released, which did not occur until after Stalin’s death. Had Eisenstein been part of a family, its members likely would have been vulnerable to being arrested, a standard technique deployed by the Stalinists when the artist was internationally acclaimed.


Akhmatova’s domestic and international reputation assured her that she would not likely be arrested. Instead, Soviet authorities repeatedly arrested and sent to the camps her son and her third major relationship. In his chapter on Akhmatova, McSmith concentrates more on her personal relationships, including offering a poignant account of her extended conversation in 1945 with the British philosopher, Isaiah Berlin, and how that conversation reverberated with her years later. Yet unlike his chapters on Eisenstein in which McSmith perceptively parses his films, I think that he scants Akhmatova’s poetry, especially her monumental "Requiem" with its cultural, political and personal associations and he ignored the fraught circumstances during the Great Terror of the late 1930s in which she composed her epic masterpiece. Fortunately, McSmith incorporates Akhmatova’s relationship with her adoring public. When she delivered a poetry reading in 1946, the audience spontaneously greeted her with thunderous applause. Stalin, who equated any form of spontaneity with treason, required his minions to denounce her as “half nun, half whore” and expel her from the Writers Union, in effect depriving her earning an income.

Akhmatova’s relationship with her public and the official treatment she received are similar to that accorded Shostakovich after a performance of his opera, Lady Macbeth of Mtsensk for its adultery, murder and allegedly atonal music. At the time, he was still protected by the greatest Red Army commander of his time, Mikhail Tukhachevsky, until the Marshall was judicially murdered. Shostakovich was only saved from the Gulag or worse by sheer luck. When Shostakovich was summoned to the Big House, the NKVD headquarters in Leningrad, to answer questions about his relationship with Tukhachevsky, the interrogator asked him to return on the following Monday; when the composer complied, he learned that the interrogator had been arrested, enabling the composer to return home. As a result of this stress, the Leningrad audience that heard the premiere of his Fifth Symphony was eager with anticipation and they were not disappointed. People were seen weeping during the slow Adagio movement and as the performance ended, “the whole audience leapt to their feet and erupted in wild applause.” Although party officials attempted to downplay their emotional responses, arguing that those applauding were not “normal concert-goers,” and that they had been “hand-picked," there is no doubt that Soviet art could reach audiences in powerful ways making them feel more human. The kind of responses evoked by Akhmatova, Shostakovich and others documented throughout Fear and the Muse provide the evidence for McSmith’s argument, but he does not capitalize on it except for a couple of strong paragraphs that conclude the book. I would have liked to have seen a concluding chapter in which the author reviews his material and explores more fully the ramifications of his evidence as it relates to his argument.

McSmith’s last chapter “After Stalin” is one of the strongest in the book. He mainly focuses on the difficulties experienced by two artists after Stalin’s death: Shostakovich and Pasternak. What is really valuable about McSmith’s discussion of the composer is his effort to transcend the sterile debate as to whether Shostakovich was a civic coward or a “dissident.” McSmith sensibly suggests that he was neither. A composer, unlike a writer needs to make accommodations in a police state because he needs musicians, instruments and audience to ensure the art comes alive. He therefore needs to become a public artist and McSmith provides evidence for the emotional toll that it took on Shostakovich. Pasternak, as indicated above, was protected but that patronage did not apply to individuals close to him like his mistress, Olga Ivinskaya, the inspiration for Lara in Doctor Zhivago. She was arrested and interrogated on numerous occasions and spent years in a Siberian labour camp. While reading McSmith’s account of Pasternak’s difficulties with Soviet officials as he attempted to publish Doctor Zhivago and the calumny he experienced when he won but could not accept the Nobel Prize for literature, I kept thinking how McSmith could have benefited by reading The Zhivago Affair: The Kremlin, the CIA, and the Battle Over a Forbidden Book (2014) by Peter Finn and Petra Couvée, but it was not likely available to him before he went to press. What would he have done with their discoveries that the CIA bootlegged copies of the novel in the original Russian which were smuggled into Brussels and given away at the 1958 World's Fair, or how thousands of Soviet citizens turned out for Pasternak’s funeral, despite the efforts of the KGB to conceal the burial site? I think that Finn and Couvée would have provided more evidence for his thesis that art was essential and spiritual sustenance for large numbers of Soviet citizens, and that its benefits terrified the authorities. There are not likely many states where a poet would remark as Mandelstam prophetically did: “Poetry is respected only in this country – people are killed for it.”
Posted by Robert A. Douglas at 10:19