The New Cold War in Jason Matthew’s Palace of Treason

This review originally appeared in Critics at Large and is reproduced on this site because I concluded my Soviet chapters in That Line of Darkness: The Gothic from Lenin to bin Laden (Encompass Editions, 2013) with a brief assessment of Vladimir Putin, a central character in the novel under review.


“[Putin] was a natural conspirator who was concerned about one thing – sila – power, strength, force. It was having and keeping sila that everything else derived: personal wealth, Russian resurgence, territory, oil, global respect, fear, women.”

In his debut thriller Red Sparrow, Jason Matthews introduced Dominika Egorova of the Russian Foreign Intelligence Service (SVR), one of the most intriguing heroines to grace the espionage genre. Courageous, a stunningly attractive former ballerina and capable of unleashing lethal force on anyone who presents a threat, Dominika is a synesthete endowed with the gift of seeing emotions as colours above the heads of those around her. (When I reviewed Sparrow two years ago, I mistakenly suggested that her synesthesia was a metaphor for heightened intuition. I have since learned that synesthesia is a neurological condition that may affect four percent of the population. Those who experience this phenomenon usually see colours in letters and numbers or associate sounds with colours, but in some rarer cases a synesthete can associate particular colours with specific people. The latter application is the most relevant to Dominika.) She is also a graduate of the Sparrow School, where male and female agents are taught advanced sexual techniques as an aid to seduction and recruitment. Dominika is recruited by Nate Nash, an internal-ops officers, also tasked with handling CIA assets. His aura is deep purple, one that is “warm, honest and safe.” But the increasingly reckless Nate breaks every rule of security by becoming involved with Dominika. In the sequel, Palace of Treason, Mathews provides sufficient back story so that anyone can enjoy this novel without having read its predecessor.

Since Matthews enjoyed a long distinguished career as a CIA officer in the roles of a clandestine operative and recruiter, both his novels are grounded in the tradecraft of espionage and as a result bristle with authenticity. InTreason, he expertly portrays a trainee attempting to elude surveillance teams throughout the streets of Washington and a heart-pounding effort by the CIA to prevent a meeting between a Russian handler and a traitor. Matthews knows well the rhythms and textures of this secretive world of Counter Intelligence and is able to write convincingly about it.

His experience enables him to delineate a compelling portrait of Dominika.When she becomes a double agent working for the CIA, she is motivated not by ideology but by the stench of corruption and the kleptocracy of Vladimir Putin in which the president and his cronies line their own pockets with millions of rubles. Dominika believes that she can save Russia by becoming a highly-placed mole in the Kremlin. There, she even manages to pull off by sleight of hand the exfiltration of a disgruntled former Red Army intelligence officer under house arrest, all the time dodging and weaving the machinations of her superior, the dwarfish Alexei Zyuganov. 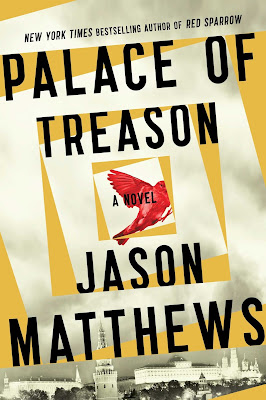 A homicidal psychopath who once thrived executing the “wet work” of torture and murder in the cellars of the Lubyanka in the Soviet Union, Zyuganov believes that under Putin and a resurgent Russia, his skills will again be valued. He is at home in his bailiwick of the interrogation chambers as he struts about and puts on his blood-coated Red Army jacket before inflicting torture on his terrified victims. Elsewhere he can only fantasize what he would like to do whenever he encounters people whom he does not trust. Above all Zyuganov is threatened by Dominika and is willing to explore any option to eliminate the “skinny ballerina,” including assassination, long before he even suspects that she might be a spy. Yet even as he faces her “in a rictus of controlled fury,” he must be careful since his mortal enemy has caught the roving eye and unblinking stare of Putin with his “ice-blue aura.” Zyuganov’s voracious sadism and physicality remind me of another dwarf, Nicolai Yezhov, the head of the NKVD, who presided over Stalin’s great terror of 1937-38. Matthews alludes twice to another Soviet mass killer, Vasili Blokhin, who executed seven thousand men in the forests of Poland. Along with other explicit comparisons between Putin and Stalin, the subtext of the novel is that the spirit of the Putin presidency carries ominous overtones that are redolent of the Stalinist era. Consequently, the stakes for the American intelligence community are very high.

The flashpoint for this contest is Iran’s fuel enrichment program, a timely (or moot) issue. Sent on Putin’s orders to Vienna to recruit an Iranian nuclear scientist and expert on centrifugal separation, a necessary step to producing weapons grade uranium for a nuclear bomb, Dominika blackmails the Iranian into cooperating by showing him a video stream of his “breaking the rules of sharia” that documents his liaison with a Serbian woman, also a graduate of the Sparrow School. Dominika and Nate, in the guise of a Russian scientist, meet with him to extract information with the goal of sabotaging the secret Iranian nuclear program. Returning for a second meeting, they find that the scientist has been murdered. Nate downloads the information from the dead scientist’s laptop; then he and Dominika flee pursued by Iranian agents in which she barely survives an assassination attempt. From this harrowing chase through Vienna’s dark streets, the later desperate attempt to uncover a mole in Washington, a tragic cock-up in the outskirts of Moscow and the novel’s climatic showdown on the riverbank of the Seine in Paris, the suspense and intensity of Treason never flag as the CIA strives to protect its prized asset in the Kremlin by assuring that her name is never revealed.

Because of his experience in the CIA and his deep knowledge of the tradecraft of spies, Matthews has often been compared with John le Carré. Yet I do not find the comparison helpful. The British writer’s novels, especially those set during the Cold War, are steeped in moral ambiguity. By contrast, although blustering incompetent operatives, as well as a CIA renegade, motivated by greed and an overpowering dose of resentment at being passed over for promotion, are featured in Treason, it is clear that Matthews believes the CIA is a force for good in the world. All the other CIA operatives in the novel, regardless of their flaws, serve their country well, occasionally heroically. Moreover, no allusion to Abu Ghraib or any of the other black sites where CIA operatives diminished the reputation of the Company besmirches its pages.

It will come as no surprise that the Russians we mostly encounter are thugs and sycophantic court hanger-ons, the latter described by Dominika as the “ghastly Putin menagerie.” Presiding over this menagerie is the President himself who is much more of a major character than he was in Red Sparrow. He is accurately portrayed as venal, obsessed with power and his appearance, and as a lady’s man, which may or may not be based on reality. As a former KGB operative, and given the assassinations of his critics, both within the country and on foreign soil such as in the UK, Matthews is on more solid ground when he has Putin order a killing. Apart from Dominika, the Russians in short are nasty, servile and greedy.

Will Matthews follow up Treason and write a trilogy? From what is revealed on the last page, I would not bet against it. I do hope that he will offer more nuance and complexity in his portrayal of both the American spies and those characterized as “the opposition.” He might benefit from watching the superb television series, The Americans, about KBG operatives, a couple implanted in America as sleepers following an arranged marriage, who fifteen years later in Reagan’s America, are trying both to raise their American-born children and serve as agents following the orders issued by “The Center.” They can be utterly ruthless but at the same time, they are recognizably human because the series dramatizes the emotional toll on those who work for the intelligence services and how their families are affected when the job requires 24/7 deceit and manipulation supplemented on occasion by the use of lethal force. If Matthews could hone his already considerable writing skills to provide greater shades of gray worthy of The Americans, then the comparison with le Carré would be justified.
Posted by Robert A. Douglas at 13:07