Part One of this piece appeared on Critics at Large on Sunday, August 16 and Part Two appeared on that site on August 23.

“The past is never dead. It’s not even past.”
― William Faulkner 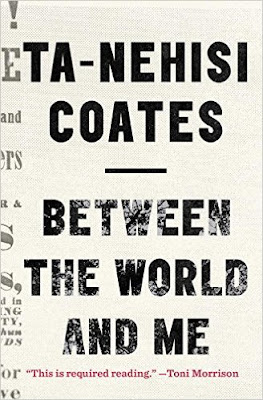 Jim Grimsley's contention that “We reserve our special ideological fury for blackness” suffuses Between the World and Me by Ta-Nehisi Coates. If the tone in most of Grimsley’s How I Shed My Skin is a gentle wistfulness, the mood that percolates throughout Between the World is one of anger, desperation and fear, punctuated by flashes of love for his teenage son, Samori. Coates, the author of the memoir, The Beautiful Struggle, has written in the form of a letter to his son about what it means to be a black man in America today. “In America, it is traditional to destroy the black body – it is heritage.” The violence to which Coates refers encompasses slavery, the terror of Jim Crow, and police brutality right up to the present moment, much of it covered by Grimsley. But Coates’ prose has a much more personal edginess to it as he has internalized and lived that history. The power of his writing in part derives from his capacity to dissolve the distinctions between the past and the present where one seamlessly flows into the other. Read the lyrical passages in Between the World and Me where he urges his son to not only respect all other living human beings but also to extend it to individuals once enslaved.

Coates insists that no amount of false morality about “personal responsibility” on the part of African Americans can shield them from lethal violence. Right from the outset when he attempts to help Samori grapple with his feelings after the police officer in Ferguson who killed Michael Brown was not indicted, Coates refuses to comfort his son or the white reader for whom this book is really intended, with “praise anthems [or] old Negro spirituals.” “There is no uplifting way” to tell the hard realities about brutality in America. Instead of bromides about racial progress, he can only offer the need for struggle, as he sets out to explore the question of how to “live free in this black body” when “black people controlled nothing, least of all the fate of their bodies, which could be commandeered by the police; which could be erased by the guns, which were so profligate; which could be raped, beaten, jailed.” As a result of his own life experiences, he believed he was in a war “for the possession of his body, and this would be the war of his whole life.” This is not a book for those whose only touchstone for improving race relations is Martin Luther King’s “I Have a Dream” speech or for anyone who wants to see America through the prism of what Coates calls the “Dream” of “perfect houses with nice lawns.”


As the son of a former Black Panther, it is not surprising that Malcolm X became Coates’ hero. The man’s honesty, his indifference to whether he made white people uncomfortable – Coates would never constrict himself to make whites feel comfortable – and the example of reclaiming himself after his prison experience is an inspiration to Coates. “Don’t give up on your life, preserve your life” has become Coates’ guiding principle. Just as Malcolm X found his geographic Mecca, Coates acquires his metaphorical one in the form of Howard University. It provides “a port in the American storm” that enables him to fear less, read voraciously, hone his writing skills and meet his future wife.

Yet that almost idyllic experience does result in a personal tragedy for Coates and all the old fears resurface. Prince Jones, one of Coates' Howard University classmates, was killed driving to visit his fiancée by a police officer in 2000 who chased him through Maryland, Washington and the suburbs of Virginia. The officer claimed that he shot Jones in self-defence after Jones tried to run him over with his Jeep. It’s a story that the authorities accepted but that Coates does not. Without spelling out the evidence the author details, I am inclined to believe Coates. His powerful account of Jones’ death, its aftermath and his conversation with the dead man’s mother, who raised herself from poverty to becoming a doctor, constitutes a large part of the second half of his short book. Her “personal responsibility” does not save her from losing her son. Jones’ death deeply affected him because he immediately recognizes that he could have been driving that car. That loss also underscores his critique of the Dream: if Americans pull themselves up by the bootstraps and attempt to provide a comfortable and safe life for their offspring, they will be rewarded – unless, Coates suggests, they are African American – even someone who is a Howard graduate and a man of faith. Coates makes it clear that his friend was not murdered by a single police officer but “by his country and all the fears that have marked it from birth” and the “police reflect America in all its will and fear.”


As I was writing this piece, I heard a segment from the The Current on the CBC in which a former Baltimore cop, Michael Wood, echoes the systemic racism that Coates chronicles. Wood is unequivocal that the fear of black males has been ingrained in American society and that blacks can be discarded to preserve what white society values. The police are thereby sanctioned to treat blacks as the enemy. Individual police officers are not racist, but racism is entrenched in the system and no one is held accountable for egregious abuses.

Some of the most moving selections in Between the World and Me are Coates’ specific cautions and expressions of love for his son. Ta-Nehisi acknowledges that Samori has experienced a more cosmopolitan life with less fear in it than he endured on the streets of Baltimore. But he warns his son that “no real difference exists between you and Trayvon Martin,” reminding him how vulnerable his body is. The father expresses regret that he had not been softer with his son, a reference in part to the use of corporal punishment that is widely practiced in the African-American family. As his own father said to him, “Either I can beat him or the police.” Black young men are unlikely to be given a second chance. As Coates admitted in an interview, he “was scared to death that his son [Samori] would wind up a drug dealer or in prison or whatever.” But if he had the chance to do it over again, he would not have resorted to corporal punishment since “violence is still violence.” One of my favourite passages to his son is etched in beautiful and lyrical prose: “You have been cast into a race in which the wind is always at your face and the hounds are always at your heel. And to varying degrees this is true of all life. The difference is that you do not have the privilege of living in ignorance of this essential fact.” Amen.

Some readers may be put off by some of Coates’ more polemical, even insensitive passages. I will not elaborate on them except to say that they must be placed in a wider context. They should not distract readers from what is an important and honest book. New York Times' columnist David Brooks wrote a piece in the form of a letter to Coates. Acknowledging that their ancestral backgrounds are radically different, Brooks was disturbed by Coates’ criticism of the American Dream – that is based on centuries of plunder of African-American bodies – and suggested that violence is not all that compromises America. On both accounts, Brooks makes sense, particularly as it applies to whites. But Coates’ experience as an African-American male is worlds apart from that of Brooks, or for that matter, mine. I would bet that neither he nor his children have been subjected to “carding” in which a young person is stopped without cause, to be asked their name and birthdate, where they live and where they are going, to have demanded the names of their friends or to have their belongings searched. If the practice is widespread and directed against blacks in Toronto, it is a safe assumption that it prevails throughout America. Nor has Brooks likely experienced the “low-grade ever-present fear” that for Coates is a daily fact of life, even when he and his family visited Paris. What would be more valuable for Brooks, indeed all Caucasians, is to simply absorb what Coates has written and participate in the conversation that he and President Obama have initiated. White Americans must acknowledge some basic truths about America’s past and how police mistreatment and other forms of discrimination still persist. Perhaps only then can the denials that racism even exists in contemporary America, much less its systemic presence, be challenged and addressed.
Posted by Robert A. Douglas at 12:13