This review originally appeared in Critics at Large and I reproduce it on this site as O'Brien's novel not only deals with how victims find their voices after horrific transgressive acts but the naturalistic novel also is fused with Gothic undertones.

“I wanted to take a dreadful situation, and the havoc and harm that it yields, and show how it spirals into the world at large.”
– Edna O’Brien on The Little Red Chairs

When Edna O’Brien published her debut novel The Country Girls in 1960, a coming-of-age novel, it was banned and reviled in Ireland because of its frank portrayal of female sexuality and a woman’s struggle for self-determination in the face of social legal constrictions. Since that time O’Brien has written novels, plays, short stories and a memoir that have expanded and deepened these themes. In 1994 she added a political dimension in House of Splendid Isolation, wherein she explored the mindset of an escaped IRA self-confessed murderer and plumbed his humanity beneath the crimes he had committed. Most recently, the grande dame of Irish literature at the age of eighty five has just published her twenty-fourth book and most ambitious, The Little Red Chairs (Little, Brown and Company, 2015) and found little humanity in a mass murderer, responsible for genocide and ethnic cleansing. (Even before the text begins, O'Brien informs us that the title refers to the 11,541 empty red chairs set out in Sarajevo to commemorate victims of the siege by Bosnian Serb forces in the early 1990s. Six hundred and forty-three of the smaller chairs in the sombre tableau were dedicated to children killed at the time.) Even though her settings are in rural Ireland and London with a brief, hair-raising foray into The Hague, Red Chairs has a global reach as countless numbers from the streams of refugees – the unending diaspora fueled by war, fundamentalism and hatred – make appearances not through impersonal media coverage but as fully fleshed human beings who are given distinct individual voices through the artistry and sensitivity of O’Brien. As a result, she has written a reimagined exploration of alternative history and a harrowing, extraordinary novel.

A mysterious stranger takes up residence in a backwater village of western Ireland. Disguised as a self-styled “holistic healer,” Dr Vladimir Dragan, his “white beard and white hair tied up in a top-knot,”and his talk of herbs and tinctures and his constant “spouting” of Latin verses, sends a ripple of suspicion through the small community. Is he who he says he is – a monk, a sexual healer, poet – or a charlatan? Many, perhaps to relieve the tedium of their hardscrabble lives, are beguiled by the shaman in black robes who disarms some with his courteous exterior and dazzles others with references to Siddhartha and Ovid. He impresses and rejuvenates a nun when she visits his clinic after he applies hot stones to her back, a scene that carries comic and chilling overtones, an important tableau to remind us that the hands of a healer can be the same as that of a butcher. Others such as a former schoolteacher are more skeptical convinced that he resembles a Rasputin figure, one who mesmerized and brought destruction to the royal family in Russia before the Revolution. I thought his was an apt comparison but I was also reminded of the eponymous vampire of Bram Stoker’s Dracula except this creature is able to grow younger before seducing a young Mina Harker, whereas, Dragan (even the name is similar) transmogrifies into an older presence to confer a sheen of erudition and wisdom. 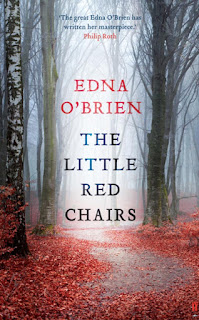 Dragan is clearly modeled on Radovan Karadzic, the “butcher of Bosnia,” who lived as a fugitive for twelve years under the name of Dr. Dragan David Dabic, earning his living dispensing alternative medicine before being captured in Belgrade in 2008, charged with war crimes and carted off to The Hague. (By coincidence, O’Brien was in New York on the day that Karadzic was sentenced to forty years, the day that her American edition was published.)

Dragan ingratiates himself with the villagers and contaminates its habitants, destroying its “primeval innocence.” We hear the story of a child refugee, originally from Sarajevo, who has escaped to Ireland. He is so traumatized by his experience that he is mute. But when Mujo recognizes Dragan, he finds his voice though no one initially believes the Gandalf-like figure is a “beast,” and he is re-traumatized until the mass murderer is arrested. An unhappily married forty-year old woman, Fidelma McBride, desperate for a child after two miscarriages and attracted by Dragan’s poetic sensibility convinces him to impregnate her, a consummation that will have ghastly consequences. Through an extended dream sequence – that O’Brien inserts as a brilliant device to communicate Dragan’s unconscious impulses – a dead “blood brother” appears to him to remind him of his genocidal intent toward the Muslims and Croatians.Once he is exposed and arrested, three thugs, who were former comrades of the war criminal, brutally assault Fidelma with a crowbar leaving her for dead. The scene is reminiscent of what happened to Lucy Westenra in Dracula, a penetration that could be interpreted as a gang rape. That Fidelma even survives this attack and finds strength and some form of redemption in London raises for at least this reader the issue of plausibility if one were to read Red Chairs as solely a naturalistic novel. If one were to read it, at least in part, as a Gothic text or a modern retelling of an Irish myth when Fidelma believes that her union with Dragan has brought a “terrible curse” to the village, a curse that must be expiated, it makes much more sense.

Leaving her claustrophobic, judgmental homeland to decamp to London – a city where O’Brien has lived most of her life and knows intimately – Fidelma tries to escape the trauma of her attack and rebuild her fragile life. Finding resources and a strength that she had previously not accessed, she commingles with the disenfranchised, its refugees and displaced persons, people who want to return home but know they cannot. She cleans offices along with other exploited migrant workers in central London, and then works at a home for retired greyhounds in the Kent countryside. They are “night people” – working shifts of menial labour while the city sleeps. They are a step away from being “ghosts.” That includes Fidelma who initially is handicapped by her shame and guilt, and so reluctant to testify to her own victimhood that she minimizes and trivializes her horrifying treatment. Yet O’Brien renders all her characters with empathy and compassion, with one significant exception. When Fidelma attends Dragan’s trial at The Hague she hears the prosecutor’s chilling words:“the thousands of civilians arrested, brutalised, killed, the tens of thousands uprooted by force, the hundreds of thousands besieged for months, years, killing sprees, cyclones of revenge, detainees held in dreadful places of detention and hundreds executed.” She later visits him in prison, hoping that he might display some sign of remorse, but he angrily denies any responsibility for the crimes he has perpetrated, instead perceiving himself as a victim. He has shredded the last semblance of his humanity.

By contrast, as O’Brien turns her attention to the dispossessed – refugees from countries wrecked by war, victims of female circumcision, of ethnic cleansing, of forced conscription – she confers upon them dignity by giving them a voice through the power of their stories. Invited into the narrative at intervals to recount their terrible experiences, they provide an extended catalogue of atrocities, battles and massacres, razed homes and devastated lives. The telling, however, empowers them to reclaim their identity and something of their own bruised humanity. The novel ends at a west London refugee centre, with an amateur performance of A Midsummer Night's Dream. Naturally, in a “free interpretation,” botched lines and comic improvisations occur. But the play's hopeful conclusion, with wrongs righted, true love restored and “home” chanted in the thirty-five languages of the performers, may not offer much of a counterweight to all the murderous depravity, harm and outrage that has blighted their lives. But the staging of Shakespeare’s drama provides a welcome if brief respite and affirmation.
Posted by Robert A. Douglas at 21:33