Through the Mirror Darkly: The Gothic Dimension of the 2016 Presidential Election (Part II)

The following is Part II of Through the Mirror Darkly: The Gothic Dimension of the 2016 Presidential Election. Part I was published here yesterday. The piece is an edited adaptation of an address I presented at the Mensa Society International Conference in Toronto on June 11.


The bigoted nativism that Trump stokes is not unique in the American historical experience. In 1780, papist immigrants were targeted allegedly for their fecundity; in 1850, the scapegoat was the Chinese who allegedly could not assimilate; in 1920, Jews were feared because they threatened the economy. The cartoon does not take into account the no-nothing movement that became the American Party in 1854 which called for the end of Catholic immigrants from Germany and Ireland. But these historical episodes were generally relegated to the political fringes and no major Presidential candidate took them seriously as a major plank in their election campaign.

Demagoguery did, however, threaten to become a part of the 1936 presidential election. In an era when the 'radio priest,' Father Charles Coughlin, contended that "someone must be blamed," governor and then senator of Louisiana, Huey Long, did plan to challenge Franklin Roosevelt for the Democratic nominee. FDR did take the threat seriously. The following is an astute comment from Harry Williams, a major Long biographer:


He was intensely interested in himself. He had to dominate every scene he was in and every person around him. He craved attention and would go to any length to get it. He knew that an audacious action, although it was harsh and even barbarous, could shock people into a state where they could be manipulated.

Sound familiar? The novelist Sinclair Lewis was so alarmed by the possibility of a Long presidency that he was inspired to write the dystopian novel, It Can’t Happen Here about a demagogic senator who becomes President and transforms America into a fascist state. Here is that senator campaigning:


My one ambition is to get all Americans to realize that they are, and must continue to be, the greatest Race on the face of this old Earth, and second, to realize that whatever apparent differences there may be among us, in wealth, knowledge, skill, ancestry or strength–though, of course, all this does not apply to people who are racially different from us–we are all brothers, bound together in the great and wonderful bond of National Unity, for which we should all be very glad.

Long was assassinated before he had the opportunity to challenge FDR. But the power of Sinclair’s novel has continued to resonate. 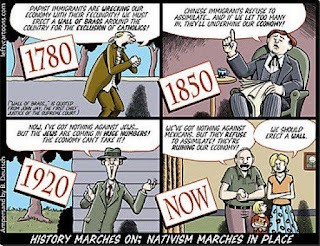 The celebrated aviator, Charles Lindbergh was a sympathetic admirer of Hitler and was even decorated by Hermann Goering. In 1940, Lindbergh was a leader of the isolationist movement, where people were determined to keep America out of the war. In 2004, the novelist Philip Roth was inspired to re-imagine what might have happened if Lindbergh launched a successful campaign to dislodge Roosevelt from the presidency. In The Plot against America, bigotry is gradually allowed to flourish, minorities are persecuted and a critical journalist is assassinated. Both Sinclair and Roth recognize that ethnic and racial anger simmers beneath the surface and can be manipulated by a skillful demagogue, a churning up of radioactive soil that can jeopardize democracy itself. Journalist Adam Gopnik considers that a distinct possibility in our time. In The New Yorker (May 20, 2016), he writes that “[i]f Trump came to power, there is a decent chance that the American experiment would be over.” Given that Trump does not have the temperament, knowledge or curiosity required for anyone who would occupy the White House, and that his visceral bigotry has no boundaries, Gopnik’s musing seems rooted in sober reality.

With the caveat that history rhythms rather than repeats as Ross Douthat elegantly notes in a New York Times column, the ghosts of 1968 have come back to haunt contemporary America. George Wallace, the pro-segregationist governor of Alabama ran as a third-party candidate and received ten million votes. Russell Baker wrote a perceptive account of that election year, but Our Next President is also astonishingly prescient because it was written before the campaign. Here is what he said about Wallace:


Wallace’s crude animal reaction to the complexities of American society found a sympathetic hearing that summer among millions baffled by the speed at which the future was hurtling upon them and frustrated by their individual impotence against the tyranny of vast computerized organizations spreading through American life. With his snake-oil miracle cures, Wallace satisfied a deep public yearning to be deluded with promises of easy solutions.

Substitute changing technology and globalization for a few words in this passage and we glean a pretty accurate assessment of the Trump campaign, as if it were possible to turn clock back fifty years to a time when manufacturing was a major economic driver of the economy and provided prosperity for white working class.


The Gothic convention of the doppelgänger or double is frequently associated with the novella and film adaptations, Dr Jekyll and Mr. Hyde or the German expressionist film M. In both instances, the “normalized” character is terrified at his primitive and dangerous side that each notices as he looks in the mirror. They should be as both commit murder. The doppelgänger is also present in real life. The 1994 trial of O.J. Simpson revealed a troubling duality in his character. Edmundson quotes from Newsweek:


Simpson lived a double life. The corporate spokesman who drank an occasional beer with Hertz executives was also a hard partyer … who cruised bars and indulged in drugs and random sex. His wife believed he was a cocaine addict; his friends, who saw him on the prowl at wild parties in Los Angeles, thought his real addiction was white women. The smooth talker took decisions to make his diction more ‘white.’ The family man was seldom home.

The terror felt by the respectable persona at his darker side in the Stevenson novella and the protagonist in M has been  reversed in the current presidential campaign. Burlesque attempts have been undertaken to “normalize” Trump and make him look “Presidential” – to represent him more like Dr. Jekyll, so to speak. Former Republican rival Ben Carson has publicly endorsed him stating that “there are two different Donald Trumps, the one you see on stage and the private man, cerebral and thoughtful.” But even he admits that he hides his human side from the world, even from himself. In a rare moment of candor he admitted to one of his biographers, Michael D' Antonio, "I don't like to analyze myself because I might not like what I see."

On the campaign trail, his advisors pressure Trump to dial down the volume and the heat by, for example, using a teleprompter. The problem is that the motor-mouth billionaire is constitutionally incapable of sustaining that pose and cannot remain muzzled for long. The blunderbuss, shoot-from-the-hip-carnival-barker guise continually erupts to incite hysteria and overwhelms the restrained persona whenever he feels threatened – for example by a judge of Mexican descent, a gold star family, or a former Miss Universe – or when he feels he can shamelessly exploit a tragedy like the horrific killings in Orlando to inflate his sense of self and prod the fear of the country. Whenever the opportunity arises to ramp up the racial and ethnic hatred of his base constituents, an alienated demographic enthralled to the past – a great America, white and Christian, that believe they have lost the country they once knew – he cannot resist the temptation to retreat to his offensive and mendacious slogans that current leadership is weak – he has a quasi-fascist disdain for anyone whom he considers weak – and that he is strong and the country can no longer afford political correctness. The empirical evidence does not matter to him or his supporters He continually offers crime statistics that are bogus, and whenever the pundits rebuke his canards, his ratings soar, at least they did in the primaries. Jeffrey Simpson in the Globe and Mail perceptively suggested that his “astonishing, scary story, yet to be fully explained, is not so much about the Donald but about his country, and the story is not a happy one,” an insight reinforced by a correspondent for the conservative, National Review, who wrote that Trump speeches "make them feel good." And they have been empowered to act out that aggression. Consider that the FBI estimates that there has been a huge spike in hate crimes against Muslims. The Trump phenomena that is roiling the country may also be unparalleled in American history as suggested in a New Yorker cover entitled “Bad Reception” that reveals an assortment of past presidents who appear united in their disgust for the Trump they see railing on television.

A 2014 satirical German film of Look Who’s Back, based on the 2012 novel of the same name by author Timur Vermes, imagines Hitler as a revenant, emerging from his bunker, becoming a reality television star and travelling throughout Germany to speak and listen in Borat-like style to the views of ordinary Germans. While some of the cast are actors, the people that “Hitler” meets are not, and what they say is quite disturbing. Director David Wnendt is astonished by their responses, especially how easily their anti-immigrant come out in these real-life encounters with a man dressed as Hitler and everyday Germans: “These extreme opinions are not coming from the fringes, but from the center, not neo-Nazis, but normal middle-class people.”


Again there is a disturbing resonance with the Trump campaign. Adam Gopnik in The New Yorker astutely comments: “He’s not Hitler, as his wife recently said? Well, of course he isn’t. But then Hitler wasn’t Hitler – until he was. At each step of the way, the shock was tempered by acceptance.” Robert Kagan is one of the most explicit commentators to limn the fascist analogy:


This is how fascism comes to America, not with jackboots and salutes (although there have been salutes, and a whiff of violence) but with a television huckster, a phony billionaire, a textbook egomaniac “tapping into” popular resentments and insecurities, and with an entire national political party – out of ambition or blind party loyalty, or simply out of fear – falling into line behind him.

But rather than sound pessimistic and concede that the inclusive slightly-shaken structures will be torn down by the wrecking tools that Trump has been willing to deploy, I suggest that there is an alternative, counter-Gothic narrative about America. One has only to read Obama’s 2016 commencement addresses to university graduates to note the outgoing President’s humour, humanity and his vision of what is good, even great about America. Here are a few lines from his Rutgers address :


Suggesting that we can build an endless wall along our borders, and blame our challenges on immigrants -- that doesn’t just run counter to our history as the world’s melting pot; it contradicts the evidence that our growth and our innovation and our dynamism has always been spurred by our ability to attract strivers from every corner of the globe. That's how we became America. Why would we want to stop it now?

Indeed, why would Americans “want to stop it now?” As if to validate Obama’s argument, I conclude with a brief passage from the valedictory address of a Texas high school student, Larissa Martinez, an illegal immigrant who has won a scholarship to study at Yale University: “The most important part of the debate and the part most often overlooked is the fact that immigrants, undocumented or otherwise, are people too. People with dreams, aspirations, hopes and loved ones. People like me.” This is the hopeful vision of America I hope will prevail over lies, paranoia and hatred in this election.
Posted by Robert A. Douglas at 15:10