Retreating to Ruth Ware's In a Dark, Dark Wood

This review, that originally appeared in Critics at Large, is reproduced here because as a psychological mystery, it is about a cohort of mid-twenty-year olds who attend a hen party in which a line of darkness is crossed.


In the week before the recent American election, I was feeling anxious – with good reason, as it turned out. Despite the polls, I felt a need to escape the tumult about the election. The World Series did not particularly interest me so I decided to dip into an absorbing page turner that would distract me. I found that Ruth Ware’s debut novel, In a Dark, Dark Wood (Simon & Schuster, 2015), satisfied my needs.

The narrator, Leonora Shaw, a reclusive crime writer, receives an email from someone she has not met inviting her to attend a hen weekend (a bachelorette weekend, in North American parlance) to celebrate the upcoming wedding of an old college friend at a house in the Northumberland English countryside. Nora – the various names that she and others affix to her are an important ingredient of the plot – living alone in London and valuing her privacy, has no interest in spending time with people she does not or hardly knows. Nora is uncertain as to why she has been invited since she and the bride-to-be, Clare, once best friends, now estranged, haven’t seen each other since college ten years earlier. Furthermore, she has not been invited to the wedding. She doesn’t even know who Clare is marrying and she does not ask. If Nora had, she would not have attended the party – but then there would have been no novel, or a very different one. (This question is raised at one point in the story.) But maid of honour, Flo, is insistent that Clare wants her there, and maybe it would be pleasurable to reconnect after all these years. Reluctantly, Nora agrees, but as soon as she arrives at this remote, modernist glass house, we know that this is not the kind of getaway that she anticipated. Things go terribly wrong: old tensions arise, tempers fray, painful secrets from the past spill out, an ominous shotgun hangs on the fireplace wall, and an intruder enters followed by a tragedy.


We need to pivot back to the beginning. When Nora wakes up in the hospital with memory gaps and a head wound, one of the first questions she asks is, “What have I done?” Horrific images stab into her brain: "I am running through moonlit woods, with branches ripping at my clothes and my feet catching in the snow-bowed bracken." She recalls a road, the roar of a car engine, headlamps. Calling out "Stop!" Then, nothing. She cannot remember anything else. But someone is dead and what at first appears to have been an accident, but with the presence of police, begins to look increasingly like murder, and everyone – even Nora – has a motive. Past-tense chapters of the weekend in question then alternate with the present-day narration of recovery and a murder inquiry. 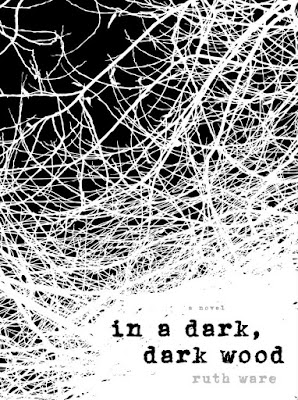 The compelling opening recalls that of the superb British crime noir Marcella, streaming on Netflix, in which a woman wakes up bloodied and wounded in the bath. But we don’t know why. Is she the attacker, or the attackee? It turns out that the woman is a police officer and we are watching a procedural. By contrast, the police officers in Dark Wood hover in the background and the reader is able to determine what really happened before they do. The novel is more a character-driven psychological thriller that faintly echoes Donna Tartt’s own debut novel, the 1992 murder mystery Secret History, about an exclusive group of Classics students who attend an elite Vermont college.

Most readers, as does the author, will know that the inspiration for Dark Wood is the English Country House murder mysteries, especially the novels of Agatha Christie. Her classic Ten Little Indians is even referenced in Dark Wood. Yet apart from the setting – and the bleak isolated glass edifice which is in stark contrast to the charming country house nestled in the bucolic surroundings – it has little in common with Christie’s mysteries. There is no equivalent to a Jane Marple or a Hercule Poirot who assembles the suspects together and then carefully unspools the motives for the murder and identifies the perpetrator. Her novels and film adaptations are cerebral puzzles that generate little emotion.

Ware’s Dark Wood is a far more visceral experience. What she captures so effectively is a brooding, charged atmosphere, shimmering with a sustained menace. This mood makes her novel a claustrophobic and chilling read reinforced by the motley group of six characters that assemble and the isolated, wintry setting with neither cell service nor neighbours to call upon. Despite the surface appearance of good cheer over drinks and the consumption of frozen pizzas, there is the peer pressure to partake in cocaine and in the embarrassingly uncomfortable game, Truth or dare? Through the catty and sometimes hurtful one-upmanship of the characters at this “celebration,” Ware is effective at suggesting a darker undertone for the purpose of this occasion. Nina is a blunt-speaking surgeon whose coarseness is a defence for having seen too much violence in troubled parts of the world; Melanie is a new mother whose only desire is to leave this emotionally fraught group and return to her child; and the only male, the gay Tom, is an arrogant playwright. There is the high-strung Flo who takes any deviation from her planned “perfect” weekend as a personal affront. Then we have the beautiful blond, Clare Cavendish, who “always did like secrets,” Nora’s former friend, a relationship that reaches back to when they were little girls at school. Ware effectively plumbs the undercurrents of a friendship that turned sour. Finally, how reliable is the skittish, emotionally wounded Nora, who wants to leave but fears she cannot, and nurses her own secrets from a troubled past? Since Nora is a mystery writer who describes herself as a “professional liar,” she is prone to invention. She begins to wonder whether she committed the crime.

For three quarters of the novel, Ware succeeds admirably in creating the slow build of suspense and a sinister unease. One of the characters even references Alfred Hitchcock. In the last quarter, however, the novel flattens out and becomes predictable once Nora recovers her memory and the truth is unravelled. Given her character, there is one scene that belies credibility in which she absconds from the hospital and races back to the house; an exchange ensues that feels contrived and has echoes of having been seen before in a bad movie. But the lack of suspense and hokiness near the end did not really matter to me because I was already hooked by Ware’s ability to capture mood and induce fear.

Her second book, The Woman in Cabin 10 (published this past July), is previewed in the final pages. Since she has already demonstrated certain gifts, I am looking forward to seeing if she has built upon what she created in In a Dark, Dark Wood. I also have no doubt that I will again need to escape into fiction that offers respite from the troubling brave new world of populist insurgence.
Posted by Robert A. Douglas at 17:02