This review, originally posted in Critics at Large, is reproduced on this site because of both the horrific transgressions perpetrated by  the Chinese government in the last century and how artists were able to provide moments of humanity through music and storytelling.


“Music which is so dear to me, and without which, more than likely, I couldn’t live a day.”

Montreal-based writer Madeleine Thien’s new novel, Do Not Say We Have Nothing (Knopf Canada, 2016), has garnered a passel of accolades – including winning this year’s Governor General’s award for fiction, the prestigious Scotiabank Giller Prize and being shortlisted for the Man Booker Award. I am pleased to report that the novel’s enthusiastic reception is warranted for several reasons. Thien’s vividly-drawn characters spans three generations against a panoramic backdrop of more than sixty years of tumultuous Chinese history: the civil era of the late 1940s, land reform and the hare-brained scheme of the Great Leap Forward in the late 1950s that through famine cost the lives of thirty five million,  the fanaticism engendered by the decade-long Cultural Revolution from the mid-1960s,  and the hopeful expectations of the 1989 pro-democracy protests followed by the tragic massacres in Tiananmen Square. Thien’s writing of these last two periods is especially gripping. A magisterial novel, Thien’s third and most ambitious in scope, speaks to the enduring influence of music – in this case, Western classical music – when a change in official tastes can render that music and its practitioners dangerously bourgeois. Finally, it is a reminder of storytelling’s power, particularly in a state where the historical narrative has been altered or suppressed to suit the dictates of the regime’s shifting political permutations.

At the novel’s outset, the narrator of the chapters set in the present, Marie or Ma-li, a Canadian-Chinese mathematician, recalls her father’s death by suicide in Hong Kong when she was ten years old following the brutal suppression of the student occupation of Tiananmen Square. Within a short time, Ai-ming, the nineteen-year-old daughter of her father’s teacher before the Cultural Revolution, arrives in Vancouver, forced to flee those same terrible events.


A-Ming introduces Marie to the importance and contents of the boxes of notebooks that her father brought from China in 1978 after he defected. Among them is the Book of Records, ostensibly a picaresque epic, a series of treasured notebooks that have been copied by hand countless times, that will resurface repeatedly in later chapters. But it is far more than an adventure story: the Book of Records contains, according to Ai-ming, the “things we never say aloud and so they end up here, in diaries and notebooks, in private places.” As the novel eventually makes clear, every time the Book of Records is copied, a minor, almost imperceptible change occurs so that over time it becomes a series of coded stories to evade the attention of the censorious government. 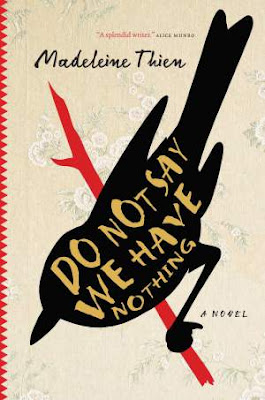 Marie, who knows little Mandarin or Cantonese, relies on Ai-Ming to relate the history of their two families. The early chapters establish a pattern as time shifts back and forth within chapters, and the focus shuffles among several characters in the two connected families. For this reader, much that is communicated in the present time period in the first few chapters is tantalizingly elliptical. Yet over the course of Do Not Say We Have Nothing, Thien expands upon and clarifies our understanding as Marie assembles the story of her father and his troubled relationship with members of Ai Ming’s family. At the same time, she offers a richly detailed canvas of China’s historical odyssey.

The central story, which unfolds in Shanghai in the 1960s, is about three musicians whose lives are permanently altered by the political convulsions unleashed by the Cultural Revolution: Sparrow, a renowned, introverted composer and teacher at the prestigious Shanghai Conservatory of Music; his young cousin, the idealistic Zhuli, a prodigy violinist; and their friend Jiang Kai, a gifted pianist, who has powerful feelings toward Sparrow. In an outburst of totalitarian voraciousness, the Communist Party incites and coerces music students to vilify their teachers and each other through a torrent of sadistic denunciations that result in demeaning humiliations and often death, including death by suicide. These passages recall those poignant moments during the award-winning 1979 documentary, From Mao to Mozart: Isaac Stern in China, when artists revealed their terrible ordeals during this time. In Do Not Say We Have Nothing, all five hundred pianos at the Shanghai Conservatory are destroyed.

In the mindless orgy of destruction and bile-spewing accusations, even Sparrow, son of a revolutionary hero, is disgraced and subjected to harsh re-education through factory work under demeaning conditions for the next twenty years. By contrast, Kai, who watched his family starve to death as a child in the 1959 famine veers toward self-protective pragmatism by joining the Red Guards, the zealous vanguard of Mao Tse Tung’s state-sanctioned tsunami of violence that swept through China. He participates in the brutalization of Shanghai artists, one of whom he savagely excoriates will haunt him for the rest of his life despite regaining official favour and resuming for a time his career becoming a renowned concert pianist and encouraging Sparrow to compose again.

Even though this ideological vortex sweeps up the careers and lives of so many people, what is astonishing is that Western musical culture survives, even in truncated form. Musical scores and instruments that were carefully buried are uncovered years later when it becomes relatively safe. Music plays in the heads of the survivors. Although Jiang Kai never again plays the piano in the West, Marie remembers her father enraptured by music whenever he heard a recording by Glenn Gould. In China, Ai-Ming observes her father humming selections from his own unfinished works when he thinks no one is noticing. The music of Bach, especially Gould’s 1956 recording, Goldberg Variations, serves not only as a motif throughout the novel but Gould’s second 1981 re-recording of the Variations becomes a bookend for Sparrow’s later musical life. Perhaps of greater import are the Soviet masters who suffered under Stalin, Prokofiev and particularly Shostakovich, on whom I think Thien models the character and music of Sparrow – for example, they both put symphonic compositions in the proverbial desk drawer recognizing that their music would not be performed in the political climate of their respective times. As one character later remarks, whereas Mao gave the Chinese people “one way at looking at the world,” Bach and Shostakovich provided for Sparrow “another way of listening.” For him to simultaneously listen to Mao’s heavy-handed obtrusiveness and his own musical inspirations was like “hearing broken music.” No wonder Sparrow kept his feelings to himself, always remaining, and urging his daughter, to be cautious.

Apart from contemporary accounts narrated by Marie, the Book of Records is a novel within a novel, a web of tales about two interlocking families, their trials and tribulations and yes, the joyous expression of their creative energies. The Book of Records speaks to the irresistible attraction of the authentic story and the human need to remember. At one point, one character tries to reassure another: “my brother, we will not be abandoned by history.” Given the considerable effort the current Chinese authorities have made to erase from the collective memory of its people what happened – for example, at Tiananmen Square – Do Not Say We Have Nothing is a rebuke against air brushing that experience, and at the same time a celebration of the moments of beauty provided by literature and music, fleeting perhaps in a totalitarian state, as they offer spiritual sustenance that can nourish our humanity.
Posted by Robert A. Douglas at 13:06