“The test of civilization is not the consensus, not the size of the cities, nor the crops – no but the kind of man the country turns out.”
—Ralph Waldo Emerson


“We may be likened to two scorpions in a bottle, each capable of killing the other, but only at the risk of his own life.”

"It's a very important thing to learn to talk to people you disagree with."
—Pete Seeger

"We must not confuse dissent with disloyalty. When the loyal opposition dies, I think the soul of America dies with it."
—Edward R. Murrow

Robert Oppenheimer, one of the scientists who authored the atomic bomb was chastened by the human costs. He opposed the building of the "super" or hydrogen bomb, That opposition and his past associations led to a hearing that deprived him of his security clearance and working for any government agency. Yet he demonstrated courage and integrity and was later vindicated.
"As the Cold War boundaries solidified around the globe, and the moral distinctions between good and evil crystallized in the 1950s, Oppenheimer's chess diplomacy landed him in trouble with the security agencies in search of communist witches, and his testimony in the hearing cost him his security clearance, and with that his place on the world stage as a player."
Michael Shermer writing in Scientific America


For a tribute to Seeger's life and career, you might wish to read Susan Green  in Critics at Large 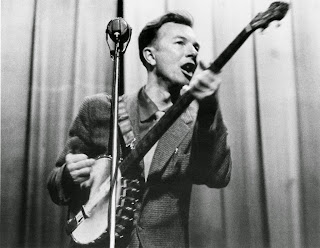 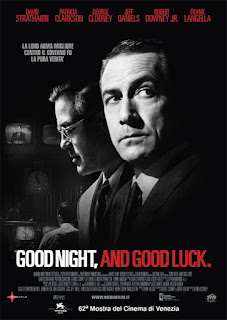 In Good Night, and Good Night, Director, George Clooney, pays homage to one of the icons of American broadcast journalism, Edward R. Murrow, in this fact-based drama. In 1953, Murrow was one of the best-known newsmen on television as host of both the talk show Person to Person and the pioneering investigate series See It Now. Joseph McCarthy, a U.S. senator from Wisconsin, was generating heated controversy in the public and private sectors with his allegations that Communists had risen to positions of power and influence in America. Among them was an Air Force pilot, Milo Radulovich, who had been cashiered out of the service due to McCarthy's charges that he was a Communist agent. However, Radulovich had been dismissed without a formal hearing of the charges, and he protested that he was innocent of any wrongdoing. Murrow decided to do a story on Radulovich's case questioning the legitimacy of his dismissal, which was seen by McCarthy and his supporters as an open challenge to his campaign. McCarthy responded by accusing Murrow of being a Communist, leading to a legendary installment of See It Now in which both Murrow and McCarthy presented their sides of the story, which was seen by many as the first step toward McCarthy's downfall. Meanwhile, Murrow had to deal with CBS head William Paley, who was supportive of Murrow but extremely wary of his controversial positions, while Murrow was also trying to support fellow newsman Don Hollenbeck, battling charges against his own political views, and working alongside Fred Friendly