Spaces of Blue Week Five: The struggle for civil rights in America


"There's not an American in this country free until every one of us is free."


"As an artist I come to sing, but as a citizen, I will always speak for peace, and no one can silence me in this."
—Paul Robeson

"Narrated by Keith David, with Jamie Foxx reading Robinson's words, Jackie Robinson is a lump-in-the-throat trip, inspiring and exciting, through a life that has often been viewed only within the confines of the game he played;  Ken Burns widens the view to take in the husband, father, activist, columnist, businessman and political figure, for better and worse (but mostly for the better) an expression of the man.


Burns traces the steps that brought Robinson together with Branch Rickey, the Brooklyn Dodgers' president and general manager, whose interest in breaking baseball's color line had a moral and a practical component: There was talent in the Negro Leagues he was eager to use; he hoped a black player would draw black spectators to the park. And he determined that Robinson could take the abuse that inevitably would accompany the promotion, from inside the team as well as without. New York Post writer Jimmy Cannon called Robinson 'the loneliest man I've ever seen in sports.'


'All my life I had believed in payback, retaliation,' Robinson recalled. 'I had a question, and it was the age-old one of whether or not to sell your birthright. Could I turn the other cheek?'"


In 1954, large portions of the United States had racially segregated schools, made legal by Plessy v. Ferguson (1896), which held that segregated public facilities were constitutional so long as the black and white facilities were equal to each other. However, by the mid-twentieth century, civil rights groups set up legal and political, challenges to racial segregation. In the early 1950s, NAACP lawyers brought class action lawsuits on behalf of black schoolchildren and their families in Kansas, South Carolina, Virginia, and Delaware, seeking court orders to compel school districts to let black students attend white public schools. 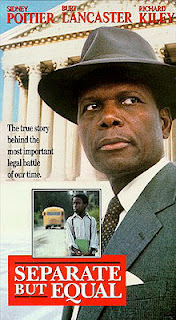 One of these class actions, Brown v. Board of Education was filed against the Topeka, Kansas school board by representative-plaintiff Oliver Brown, parent of one of the children denied access to Topeka's white schools. Brown claimed that Topeka's racial segregation violated the Constitution's Equal Protection Clause because the city's black and white schools were not equal to each other and never could be. The federal district court dismissed his claim, ruling that the segregated public schools were "substantially" equal enough to be constitutional under the Plessy doctrine. Brown appealed to the Supreme Court, which consolidated and then reviewed all the school segregation actions together. Thurmond Marshall, who would in 1967 be appointed the first black justice of the Court, was chief counsel for the plaintiffs.

Thanks to the astute leadership of Chief Justice Earl Warren, the Court spoke in a unanimous decision written by Warren himself. The decision held that racial segregation of children in public schools violated the Equal Protection Clause of the Fourteenth Amendment, which states that "no state shall make or enforce any law which shall ... deny to any person within its jurisdiction the equal protection of the laws." The Court noted that Congress, when drafting the Fourteenth Amendment in the 1860s, did not expressly intend to require integration of public schools. On the other hand, that Amendment did not prohibit integration. In any case, the Court asserted that the Fourteenth Amendment guarantees equal education today. Public education in the 20th century, said the Court, had become an essential component of a citizen's public life, forming the basis of democratic citizenship, normal socialization, and professional training. In this context, any child denied a good education would be unlikely to succeed in life. Where a state, therefore, has undertaken to provide universal education, such education becomes a right that must be afforded equally to both blacks and whites.

Eyes on the Prize is the most comprehensive, detailed, and informative series of any covering the Civil Rights struggles from the early stages through the 1980's. This is a must see for any person looking to get information and insight on what the struggle for equality was like for black people in America. They compile actual footage from historical events, along with interviews with some of the people who were actually there. This series will make you go through a range of emotions as you actually feel of part of the history that you are viewing. Julian Bond, (who participated in many of these events) does a masterful job a narrating the entire series. This is one series that you must have in your collection.
For a strong article on the struggle to establish Martin Luther King  holiday


For a perceptive review of this film, I would recommend Steve Vineberg's review in Critics at Large.


For a review of a one-man play on the life of Paul Robson, you might wish to read my review from Critics at Large http://www.criticsatlarge.ca/2015/02/ol-man-river-song-drama-and-life.html


While traveling in the Deep South, Virgil Tibbs, a black Philadelphia homicide detective, becomes unwittingly embroiled in the murder investigation of a prominent businessman when he is first accused of the crime and then asked to solve it. Finding the killer proves to be difficult, however, especially when his efforts are constantly thwarted by the bigoted town sheriff. But neither man can solve this case alone. Putting aside their differences and prejudices, they join forces in a desperate race against time to discover the shocking truth.
It's been called one of the most revolutionary acts committed to film.

Forty-two years after the event it still packs a punch. Note that one of the main characters in this scene is an African-American and the other, an autocratic white plantation owner, looks like Dick Cheney.

In 1965, noted Mark Harris in Slate magazine, in order to get the film made, "producer Walter Mirisch had to run the numbers and show United Artists that a picture in which Sidney Poitier one-upped a town full of white rubes could make money even if it never opened in a single Southern city."

Sidney Poitier plays the Philadelphia detective visiting a relative in the Deep South. He's arrested, vexatiously, by the local police. Beginning an almost routine process of trying to fix him up for a local murder, he reveals his identity. In a performance that won him an Oscar, Rod Steiger plays the role of Police Chief Bill Gilliespie. Initially an oafish redneck, the growing respect between himself and Poitier's Detective Virgil Tibbs is one of the great two-handers of cinema.