A German Family that Refused to Conform: Joachim Fest’s Not I

This review that originally appeared in Critics at Large appears on this site because the memoir is about a family  that refused to cross a dark line during the Third Reich.


“One sometimes had to keep one’s head down, but try to not look shorter as a result!”
“They [Germans] have lost their passion for introspection and discovered their taste for the primitive.”

– Johannes Fest, father of Joachim Fest, from Not I: Memoirs of a German Childhood

Throughout his professional career, first as a radio journalist and later as an historian and as a biographer of Hitler and Albert Speer, Joachim Fest was haunted by the question: how did Germany, a country almost obsessed with culture, descend into Nazi barbarity? In his final and most personal work before his death in 2006, Not I: Memoirs of a German Childhood (Other Press, 2014), Fest explores the reverse question: how was it possible that his family maintained its moral bearings and did not succumb to the mass hysteria engulfing the country? The answer starts with his uncompromising father, who is, at least in the first half of the book, the central figure of this remarkable memoir that tracks the author’s life into young adulthood. Fest, the son, takes his title from his devout Catholic, proudly Prussian, father, whose inspiration is derived from St. Matthew’s Gospel: “Even if all others do, not I.” The author pays tribute to his father (and mother) by serving up a memorable tale of courage and stoic endurance of “the revolting Nazi period” reminding us that simple human decency is possible even during an oppressive tyranny. 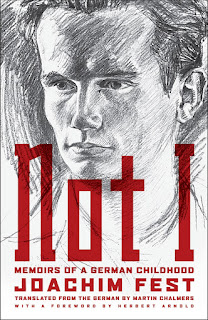 Fest senior was a head teacher, and an ardent Weimar Republican, who was disgusted by his fellow conservatives who betrayed the country by surrendering power to the Nazis. Henceforth, his overriding concern was to keep “the totalitarian infection from affecting his family.” His outspoken views against Hitler’s “band of criminals” resulted in the loss of his job a few months after Hitler acquired power. Because he refused to join the Party, he was banned from other employment for the duration of the Third Reich. He withstood the belligerence of the Hitler Youth when they demanded that his three sons be recruited. Provided they were not Nazis or Communists, he continued to maintain friendships with political activists, both Gentiles and Jews, and constantly issued warnings to his Jewish friends that they should leave the country while they still could. Only one did; the rest of them remained convinced, as did many of his Gentile friends, in the power of high culture – represented by figures such as Beethoven, Goethe and Kant – that the Nazi vulgarians would never prevail in the long run.

The price for Johannes’ nonconformity was high. It severely tested his marriage. He refused to take his wife’s advice and join the Nazi party merely as a formality to regain his job. The family endured poverty, was regarded as a social pariah – “a wall of silence and looking the other way” – and received anonymous telephone calls warning of visits from the Gestapo. Despite harassment, Fest senior was prepared to sacrifice himself and his family of five children over his wife’s objections who pleaded with him to temper his intransigence, even though she shared his politics. To ensure that the younger children would not let slip at school or in the playground anything that could be construed as hostile to the regime, Fest’s parents instituted a second dinner sitting for Joachim and his older brother, Wolfgang, after the younger children were in bed. This arrangement allowed for a more open discussion; the one rule strictly maintained that nothing can be aired in public, similar to the wall constructed in Nina Willner’s superb family memoir, Forty Autumns, that is largely set a generation later in the GDR. But this cautionary measure did not deter Joachim from scratching a caricature of Hitler on his desk, earning him an expulsion from school and respect from his father who rarely expressed affection.

Throughout the memoir, the author recounts his love of opera and his voracious reading of the German classics – passages that may cause some North American readers’ eyes to glaze over – but do not be deterred; there is an important reason for their inclusion. Fest inevitably joined and participated in a pro forma manner in the Hitler Youth Movement and later served as a soldier, barely escaping death while former classmates and his beloved older brother died. During these fraught-laden years, music and literature often provided his only nourishment, along with his dream at that time of becoming a scholar of the Italian Renaissance. And he does offer intriguing insights. One particularly fascinating instance occurs as he attends a performance of Beethoven’s opera Fidelio. Near its conclusion, the Prime Minister arrives to release the prisoners and arrest the villainous oppressors. Fest instantly recognizes that the opera could be interpreted as an allegory for his times as Germans await their liberator from Nazi oppression. Yet he understood that he could not publicly acknowledge this apercu. Instead, he dismissed the opera as a “German fairy tale” and suggested that the regime should not permit its performance. Fest learned to become disingenuous in public.


Near the end of the war, he was captured by the Americans and spent almost two years as a German POW living under relatively decent conditions unlike those under French, or even worse the Russians. He read British, American and French authors as he improved his linguistic skills. He began a diary at this time and incorporated quoted passages into his memoir. After an abortive escape attempt, his living conditions became more restrictive, but he was soon released and able to return to Berlin where he rejoined the surviving members of his immediate and extended family. His father was physically and spiritually a shell of his former vibrant, acerbic self, surviving the hell of a Soviet prison camp after the Nazis commandeered him for labour service during which he was subsequently captured. Although Joachim recounts the litany of rape and violence perpetrated by the Soviet soldiers, a savagery that included the horrible violation of his relatives and the classmates of his two younger sisters, he says nothing about what happened to them, so they remain at best shadowy figures throughout his narrative.

In his final postwar chapter, Fest briefly describes his study of law and early career in journalism but he reveals little about his private life or personal relationships beyond his family. He unsuccessfully attempts to encourage his parents to write about their experience of the Third Reich; his father believes that writing about the Nazis would dignify them, something they do not deserve and is somewhat contemptuous that his son is writing about the “gutter subject.” In part his reluctance can be attributed to his gradual awareness of the Holocaust before the end of the war and his raging sense of impotence that he could have done nothing to stop these crimes. Even had he known about the White Rose movement in Munich in which its members distributed leaflets about the killings in the East, were arrested and executed – there is no indication in the memoir that he was aware – he did not have the temperament or energy to follow suit.

Perhaps most valuable is the author’s distillations about his personal experiences. He distrusts not only the Nazi and the Communist ideologies, the latter for which he has little to say, but all isms that promise a better life. As a conservative, he leaves it to Henry David Thoreau to sum up his philosophical position: “If I knew for a certainty that a man was coming to my house with the conscious design of doing me good, I should run for my life.” Limited state involvement in people’s lives and civility are the bulwarks against ideological zeal, especially emanating in postwar Germany from the left. A reader does not have to agree with his politics to deeply respect the Fest family’s courage and independence of mind for their principled opposition to the moral canker of Nazism.
Posted by Robert A. Douglas at 16:31