The following review, which originally appeared in Critics at Large is reproduced on this site because during the novels under review illustrate how during the Irish 'troubles"  all the paramilitary groups and the British security forces crossed that line of darkness.


If we were to only read Adrian McKinty’s sixth and most recent entry of his Sean Duffy series Police at the Station and They Don’t Look Friendly (Seventh Street Books, 2016) and his previous Rain Dogs (2015), we would be gripped by his outstanding opening chapters. In Police at the Station, we are dropped into a tableau that could have emerged from The Sopranos – except it is 1988 in Ulster, during the Irish “Troubles” in which over the course of thirty years 3,600 people were killed by Republican and Loyalist paramilitaries, and the Security Forces. Detective Sean Duffy is being prodded forward with guns to his back through a patch of woods to dig his own grave. (The 2009 film, The Crying Game, is perhaps a better comparison.) He knows this scene well. He has been the responding officer on “half a dozen bodies found face down in a sheugh, buried in a shallow grave, or dumped in a slurry pit on the high bog." Before the reader can wonder whether this series is coming to an end, the next chapter veers back to the beginning of the mess in which Duffy finds himself, the investigation of a drug dealer’s murder shot in the back with a crossbow. In Rain Dogs, Muhammad Ali is visiting Belfast as a "peace tour" and Duffy is on security detail. Although Ali did visit Ireland twice, this fictional scene has the feeling of verisimilitude, given McKinty’s description of the boxer and his face to face with a bunch of skinheads opposed to him on the grounds of the colour of his skin. It is a marvellously constructed opener even though it has nothing to do with the plot that follows. 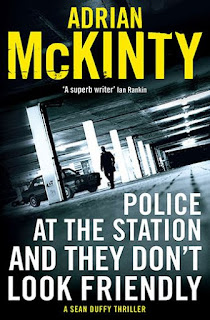 I then read the first novel in the series, The Cold Cold Ground (2012),to determine whether McKinty openers regularly display the same verve. Not quite, as the first chapter in Ground is more conventional even though it serves a valuable function. McKinty is primarily interested in introducing us to the context of “The Troubles” in 1981, the crime – someone, perhaps a madman, is killing homosexuals – and the character of Duffy. He is an anomaly: a Catholic living in a Protestant community and working with Protestant officers; university educated, he was working on his doctorate in psychology before quitting to become a police officer to do his part in stopping “the madness”; he is blessed or cursed with a mordant sense of humour, and he is something of a maverick who is willing not only to buck the authority of his superiors but put himself at great risk by defying the orders of the security forces.

The opening salvo may not possess the pièce de résistance of his most recent novels but it does illustrate an important feature of this series: the context is placed at the service of the characters and story rather than the other way around. McKinty, who now lives in Australia but grew up in the town of Carrickfergus 18 kilometres away from Belfast, the settings of the novels, does convey a visceral sense of the sectarian violence and the IRA’s guerrilla war against the British government. But his first hand-knowledge and research never overwhelm his characters and storytelling – a cardinal attribute of good crime writing.

Having read three novels in the series, I have noted other distinguishing trademarks of McKinty’s fine writing. He seamlessly incorporates current events of the time and real personalities (albeit sometimes disguised) into his fictional narrative. In Ground, the attempted assassination of the Pope, the Royal Wedding and the Yorkshire Ripper trial in England are background news but the hunger strikes, the death of Bobby Sands – the subject of the 2009 film, Hunger – and the rioting in Belfast are more immediate and dangerous presences. Gerry Adams has a walk-on appearance. Most North American readers may not be aware that McKinty's Freddie Scavanni is based on Freddie Scappattici, a onetime interrogator and hit man for the IRA, who became an informer for the British Army and connected to the murders of forty loyalists, republicans, police officers and civilians, many of whom had no connection with terrorism.

In Rain Dogs, Duffy’s investigation of an apparent suicide leads him to Kincaid Young Offenders Institution in Belfast where a pedophile ring was operating. Kincaid is a stand in for Kincora Boys’ Home that was in reality the scene of serious organized child sexual abuse that attempted a cover-up in 1980 because there were allegations of state collusion. Not surprisingly, Jimmy Savile – the flamboyant BBC superstar and philanthropist who enjoyed a personal relationship with the Thatchers and Prince Charles, was knighted by both the Queen and the Pope, and may have been responsible for the sexual abuse of five hundred boys – makes a cameo appearance, revealing a more malevolent presence than what his adoring public would have known at the time. 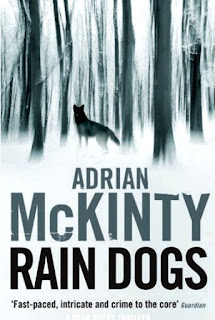 McKinty also enjoys deploying literary allusions along with classical and popular music, somewhat akin to the Inspector Banks series of the English/Canadian writer, Peter Robinson. In Ground a few lines from an aria in Puccini’s La Boheme may or may not be a significant clue for Duffy to solve a murder. Also Duffy is constantly challenged in his attempt to secure a stable relationship with a woman; the budding relationship with a physician who conducts autopsies in Ground is not the same woman as the on-and-off relationship with Beth of the later novels. Moreover, often in the midst of investigating grisly crimes, McKinty injects broad humour or the scene itself has a comic aura. Despite the presence of the stiffening corpse shot by a crossbow in Police at the Station, a goat presides over events contaminating the evidence. The humour may serve as a counterpoint to McKinty’s more ambitious intentions. Throughout, initial appearances of a certain crime and its resolution is not what the novel is really about, whether it is the murder of homosexuals, the apparent suicide of a journalist inside Carrickfergus Castle or the murder of a drug dealer. McKinty is more interested in investigating darker more disturbing issues that resist an easy resolution.

Given that the Troubles are a constant presence, the novels possess a stark political dimension. Every time Duffy gets ready to drive away in his car, he checks beneath it to make sure that the IRA hasn’t attached potentially lethal mercury tilt bombs to the undercarriage. In Rain Dogs, a Chief Superintendent is killed in this ghastly way. In Police at the Station, McKinty alludes to the hideous murder of two British officers by a rioting mob. McKinty also offers valuable insights to explain why serial killers are rare in Ulster: individuals with psychopathic inclinations can deflect them by working for the “Cause.”

Despite the insistence by his superiors that in Police at the Station Duffy abandon the case about the death of a drug dispenser and the subsequent disappearance of the man’s wife, the detective refuses to capitulate. His dogged investigation uncovers the 1968 shooting of a couple who had allegedly rammed a police checkpoint, a vital piece of information that helps him to unravel the complexities of the case but leads to that lonely spot in the woods where he is about to be executed. I will not reveal what occurs at this point or whether McKinty is ready to conclude the Sean Duffy novels but I highly recommend the series for its compelling plots, interesting characters and perhaps most of all its insightful excavation of recent Irish history.
Posted by Robert A. Douglas at 18:24