This review, originally posted in Critics at Large is reproduced here because the novel assessed is about crossing boundaries from a war zone to the West but without the moral connotations that this site  usually focuses upon.


Mohsin Hamid's most recent and timely novel Exit West (Riverdale Books, 2017) is set in a nameless, besieged country likely in the Middle East where Saeed and Nadia, the book’s protagonists ( and the only two characters named), meet in an evening class and embark on a courtship. Initially, they reside in "a city swollen by refugees but still mostly at peace, or at least not yet openly at war." That is soon to change as their tentative, gentle relationship contrasts with their country teetering on the lip of a precipice as it disintegrates into war.

In the first half of this remarkable novel, Hamid charts their growing relationship amid the backdrop of a city spiralling out of control, requiring the young lovers to leave. Although the graphic details he provides feel authentic, Exit West is not a "realistic" novel à la Jenny Erpenbeck's Go, Went, Gone. There is an abstract quality about the vagueness of its setting, its characters, and its narrative that Hamid renders in exquisite prose with occasionally longish, orotund sentences. He is primarily focused on highlighting the universality of societies at war with themselves and how civilians respond to the chaos closing in on them.

In the novel's second half, the author avoids recounting the arduous journey of migration: tableaux of sea crossing in hazardous boats or long lines of migrants who aspire entry into Germany or Sweden. Instead, he opts for the literary device of magical doors reminiscent of C. S. Lewis’s The Lion, the Witch and the Wardrobe, in which four children find a secret passageway, through a wardrobe in a spare room, to the mysterious realm of Narnia. Hamid's Narnia through “doors that could take you elsewhere, often to places far away” opens into Mykonos, London and Marin, California near San Francisco. When Saeed and Nadia arrive in these relatively safer climes, Hamid explores how well his characters adapt to their new environs and the effects of those changes upon their relationship. Hamid wants us to understand that his couple is not alone. Interspersed throughout the novel are magic-realist vignettes of exchanges between strangers in other various regions of the world being irrevocably transformed by migration.

From the outset, Nadia is the more adventurous. While Saeed lives with his parents, she resides alone and rides a motorcycle. Although not devout, she wears a religious outfit for self-protection, “so men don’t fuck with me.” She drops another black robe from her window to him, so that he can pass as her sister and enter her apartment. They engage in the ordinary rituals of modern dating: they eat at a Chinese restaurant, smoke joints and psychedelic mushrooms and text each other during work. 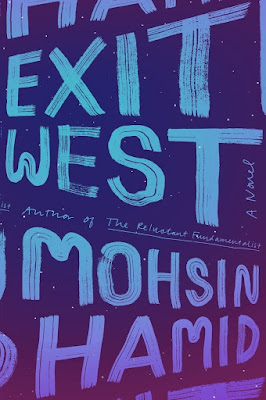 As their relationship develops, the city devolves into a war zone. Gunshots heard in the distance are followed by helicopters and drones. Militants (no specific group is named) take over the stock exchange, but are gunned down by the government, with considerable collateral loss of life. Emboldened, the militants begin arriving in the city in unexpected numbers, taking over territory. Sniper fire and armed soldiers at checkpoints, along with air strikes and bombs, become daily realities. Cell phones suddenly lose their signals, municipal services shut down and windows are shattered by bullets. There are gruesome private and public executions of people with certain surnames and denominations (perhaps Yazidis?). Funerals become more rushed affairs, if at all, because of fighting in the streets. One day, Saeed’s father nostalgically watches a group of young men playing soccer, until he realizes they’re not playing with a ball, but with a human head. When violence directly affects Saeed's family, he and Nadia pay a fee to migrate even though they also pay an emotional price by "murder(ing) from our lives those we leave behind.”

When they disappear through the mystical door and arrive in Mykonos, they find a camp of refugees whose skin tones range from “dark chocolate to milky tea” on an island that is shared with wealthy tourists. Another “door” takes them to London, that is largely unrecognizable being the author's projection of the most apocalyptic fears of a post-Brexit Britain. Migrants are moving into countless empty houses in parts of the city which local newspapers refer to as "the worst of the black holes in the fabric of the nation.” The energy is turned off in these areas. Nativist mobs threaten full-scale violence against these outliers prompting Nadia to reflect that their new domicile is starting to resemble the country in which they were born. The London interlude is the most inspired in the book, while the section on Marin pales in comparison. By this time Hamid is more focused on investigating how Saeed and Nadia's relationship has been affected by their exile.

From the moment the couple arrives in Mykonos, the relationship begins to unravel, incremental changes that are at first almost imperceptible. Nadia, despite still wearing the black robe, is more resilient and more at ease adapting to change, seeking out outsiders, attending meetings in London whereby she is the only non-African, while the devout Saeed seems only comfortable with people who are from his country even if they intend to cause him harm. Like the lyrical prose I have already quoted, Hamid's description of these changes is elegant and moving. As the challenge of migration takes a psychological toll on Saeed, Nadia begins to notice a bitterness in him that she had not previously detected. Their passion "managed to cool slowly, without curdling into its reverse, anger, except intermittently." Eventually, "her desire to be touched by him, long subsided did not flicker back into flame." I will leave to readers to discover how their relationship plays out, which may or may not surprise them.

Besides writing an artful novel, Hamid has a larger political purpose. In an interview, he warns that “[t]he more that people who are economically freezing and precarious become aware of places where people are economically warmer and more safe, the more they want to move." Later, he remarks: "We need to figure out how to build a vision for this coming reality that isn’t a disaster, that is humane and even inspiring.” An artist more than a pamphleteer or a polemicist, he does not write such expository and uplifting sentences in Exit West. The closest that the novelist comes to etching such a peroration occurs after Saeed and Nadia arrive in Marin: “[T]he apocalypse appeared to have arrived and yet it was not apocalyptic, which is to say that while the changes were jarring they were not the end, and people found things to do and ways to be and people to be with, and plausible desirable futures began to emerge, unimaginable previously, but not unimaginable now...” This passage encapsulates the universal hopes of migrants from war zones who decamp to the West. Given the current cultural climate in America and much of Europe, one can only wonder at its optimism.
Posted by Robert A. Douglas at 12:39