A Spy in the Family: Karen Cleveland’s Need to Know

This review that originally appeared in Critics at Large is reproduced here because spying always entails transgression.

“If I had to choose between betraying my country and betraying my friend, I hope I should have the guts to betray my country.” – E. M. Forster, "What I Believe" (1938)

I thought of E. M. Forster's controversial dictum while reading Karen Cleveland’s fast-paced and engrossing spy thriller, Need to Know (Doubleday Canada, 2018). In this instance, however, husband substitutes for "friend." Vivian Miller, a counterintelligence analyst for the CIA in Washington, developed an algorithm which will enable her department to identify Russian sleepers. But she is plunged into a serious crisis when secretly navigating through the hacked computer of a mid-level Russian handler. Initially, she's thrilled to discover photographs of five agents until she realizes that one of the faces is that of her husband, Matt. At that moment, her world begins to spin out of control.

When Vivian confronts Matt that evening, instead of denying it, he admits to having been a sleeper for twenty-two years. They have been married for ten of those years. As a software engineer, Matt has the flexibility to get the kids off to school, shop, prepare the meals and read to them in bed. He has been a steady physical and emotional presence in their lives. Reeling from her discovery that his betrayal has shredded their marriage and jeopardizes her job, she is nevertheless faced with an existential crisis. Does she “support and defend the Constitution of the United States against all enemies, foreign and domestic” by turning him in, as Matt surprisingly suggests that she do thereby damaging her family, or does she betray her country to protect him and keep her loved ones together? I do not think readers will be shocked to know – and it is revealed early in the novel – that Vivian takes what she considers one innocuous step toward protecting her husband and her four children.

That decision, rather than making her problem disappear, emboldens the spooks to resort to blackmail by threatening to expose her if she does not meet their demands and, should blackmail fail, they will not hesitate to apply to not- so-subtle threats against her family. What follows is a gripping read that lives up to the marketing promo as a page turner that cannot be put down. Need to Know may not carry the cerebral gravitas of a le Carrénovel but Armstrong's experience as a former CIA analyst confers upon her novel a ring of authenticity that enhances the credibility of her depiction of that milieu. 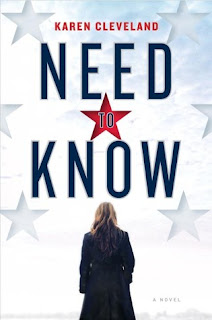 Need to Know is also a domestic drama which explores relationships between Vivian and Matt and their interactions with their children. Apart from one brief instance that occurs late in the novel, everything is perceived through the observations and inner consciousness of Vivian. That has the advantage of generating suspense as to whether Matt is who he says he is – orphaned at thirteen, taken into a state institution where he was indoctrinated and trained to be a spy and later living in America as a deep sleeper before his relationship with Vivian – or a calculating, ruthless agent who happens to be a very good actor. The loving manner in which he engages with Vivian and the children, and his determination to protect them from potential danger and his lack of defensiveness with his wife appear persuasive.

Several chapters include Vivian recalling episodes in their life together whereby she begins to cast them in a different light as a result of the shocking revelation about Matt. For instance, she remembers their apparently random initial meeting on the first day that she arrived in Washington to take up her new position and now wonders whether her literally running into him was a spontaneous occurrence. When she confronts him about it, he readily admits that he had his sights on her for a long time and that the encounter was carefully staged. He also acknowledges that his "parents" who attended their wedding were agents just like him. Yet he continues to reassure her that he is owned by "them" and would like nothing more than to be free of them. In the meantime, he adamantly maintains that he reveals to his handler nothing consequential that would betray his wife and her work.

In some ways, Matt recalls the real-life career of Knud Wollenberger who became an IM – unofficial collaborator – and was ordered by the East German Stasi to date, marry and spy upon the human rights activist Vera Lengsfeld. They had two children. His spying activities in which he revealed the most intimate details of their marriage may not have been uncovered had the Wall not come down enabling the former East Germans to read their Stasi file.

Need to Know also bears a strong similarity to the superb television series, The Americans, a spy-thriller-cum-domestic drama set in the 1980s about two KGB officers living under deep cover as a married couple, ordinary suburbanites, who run a travel agency. But there is one major difference. Like Matt we know that The Americans' Philip Jennings (Matthew Rhys) has been ordered to court the secretary Martha (exceptionally played by Alison Wright) because she is a valuable conduit for accessing FBI knowledge about Soviet spies. But we also know that "Clark" is deceiving her and that despite his declarations we understand that he does not love her, in part because his training has enabled him to dissociate sex from love. Also because of his "job," Clark rarely spends time with her and must leave most evenings. Yet Philip does begin to display the psychic scars of this deception. By contrast, there is no evidence that Matt has another woman whom he must abscond from the house for a tryst and his professions of love for Vivian and the children convey the impression of sincerity. If he is faking it, he shows no signs of bearing any emotional cost.

I do have a couple of caveats with this otherwise engaging debut. I began to wonder what happened to all Vivian's training and analytical skills. Had she become so vulnerable in the need to protect her family, she could not access these resources when they were most needed? Also three, perhaps four, unexpected developments occur late in the novel. I think most of them are plausible but one seriously stretches credibility. Of course I cannot be specific but highly recommend that you read the novel and draw your own conclusions.

I understand that Charlize Theron has purchased the film rights, will produce it and play Vivian Miller. I will be most interested in seeing what changes the film makes.
Posted by Robert A. Douglas at 15:19