About halfway through Dirk Kurbjuweit's unsettling psychological thriller, Fear (translated from the German by Imogen Taylor and published by the House of Anansi Press, 2017) the narrator, Randolph Tiefenthaler, a Berlin architect, recalls a Christmas dinner he and his wife, Rebecca, hosted for his extended family a few years earlier before the central narrative occurs. His sister was dating a Romanian, a supporter of the dictator, Ceausescu, who having fled his country after the 1989 revolution, ended up in Berlin as the owner of a gym. As a supporter of self-justice, he dismissed Germans declaring that their only interests were "stuffing their faces and watching their pensions" with no "real men" with "the guts to defend themselves." His bravado constitutes a litmus test for what defines manhood.  At the time, Randolph is silently contemptuous of this disdain for civility and of his "ignorant, brutish view of democracy."

On the surface this fascinating tableau is inconsequential as the Romanian exile never reappears, but it does highlight an important motif in the novel: the tension between the values of civility and the rule of law pitted against vigilante justice when there appears no other option for a family terrorized by a stalker. Kurbjuweit, the deputy editor-in-chief of Der Spiegel, was inspired to write Fear based on his own experience of being stalked.

In the novel's opening pages, Randolph and his family visit his imprisoned father, Hermann, who we soon find out has pleaded guilty to murdering Dieter Tiberius, the creepy tenant who lived below his son's apartment. In most conventional mysteries, this chapter would constitute the conclusion of a novel, not the beginning. But Fear is anything but a conventional psychological thriller. The apparent mystery is what actions would drive the law-abiding Hermann to commit murder, but Kurbjuweit is more interested in exploring masculinity and its relationship with fear. He deftly accomplishes this challenge by investigating the wider family and historical context.

There is little doubt that Dieter represents a nuisance and an increasing threat to the Tiefenthaler family. At first he appears to be an eccentric but harmless loner. But the tensions ratchet up when he writes sexually explicit letters to Rebecca, becomes a peeping tom, and most disturbing, files reports with the police that that Randolph and Rebecca are sexually abusing their children. Randolph attempts to have Dieter arrested but the police refuse, arguing that no crime has been committed. His lawyer advises him to purchase a gun. His ordeal seems to consume him and his wife.

At this juncture, the reader's sympathies are totally with the Tiefenthaler family as what we read is filtered through Randolph's consciousness. He and his wife are being harassed and the legal system cannot help them. As a civilized member of a democratic country, he has always renounced the use of force by private citizens. As both husband and wife become increasingly desperate, the marriage begins to unravel. Kurbjuweit shifts the narrative and widens his lens to explore Randolph's early family history and how his background has shaped him as an adult. 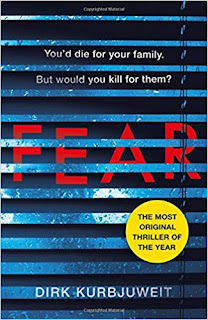 Both his parents carry the emotional scars of  the Second World War when they were children. Randolph recalls his mother's telling comment about their own marriage: "If you walked through the burning city of Cologne as a little girl, heard the bombers, the shells and sirens, knew the smell of burnt human flesh and had to see open wounds and torn limbs, perhaps you feel you have put the worst behind you – that a domestic dispute is a trivial matter." Although Hermann's experience of the war was limited, being too young to fight, he was physically abused. His father, a police officer, brought his gun home, thereby serving as a catalyst for Hermann's obsession with guns as a means to keep his fear at bay.

Randolph was born during the Cuban Missile Crisis, a time when Berliners feared that their divided city would be ground zero in a thermonuclear war. The fear at that time would have penetrated the infant's nervous system. As a boy, he resisted his father's efforts to teach him how to shoot and avoided his father's blandishments to accompany him every Saturday to the shooting range. We can only speculate how living with a father who kept thirty loaded guns in the family home affected Randolph's emotional state, despite acquiring an education that repudiates his parent's values.

Kurbjuweit also plants doubts about whether we are receiving an accurate account of the family's travails. We begin to wonder why Randolph engages in odd behaviour: leaving his wife alone to dine on his own at an expensive restaurant, or travelling alone during this crisis to attend a friend's wedding in Bali. More unsettling are the details revealed about his behaviour around his children that raises the question of whether there is any truth to Dieter's accusations.

Kurbjuweit provides a twist to his conclusion that may satisfy some readers but for me is a marked departure from the nuance and ambiguity that until then distinguished his writing. However, Fear is important because it is a fitting testament to the current zeitgeist in which fear can warp not only an individual's moral compass but that of a society. In Germany, the voices of the far right are more clamorous and was reflected in the recent election and the growing popularity of the AfD in the opinion polls.

The taunting by the former Romanian in Fear about "soft Germans" and real men at the Tiefenthaler's Christmas dinner continues to resonate in the real world. The resolution in Kurbjuweit's perhaps prescient novel could be catastrophic for the rule of law and what constitutes a civilized society, if people become so desperate about the perceived failures of the state that they are willing to elect a government that might condone the behaviour of citizens who take the law into their own hands.
Posted by Robert A. Douglas at 20:55