This selection that was originally written in the context of  the British press's fabrication of atrocity stories did not survive the final editing of  That Line of Darkness: The Shadow of Dracula and the Great War, Encompass Editions, 2012. 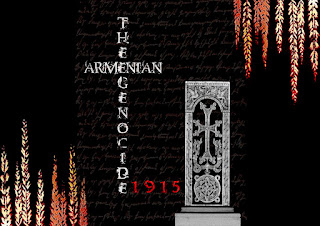 One of the consequences of the over-the-top “revelations” of reported atrocities in Belgian and the Western Front was the inability to absorb in Britain real horror amid the welter of false and exaggerated propaganda stories. A case in point is the officially orchestrated Turkish campaign to ethnically cleanse the Ottoman Empire of Greeks and Armenians. Humiliated by the loss of their European lands during the Balkan wars of 1912-13 and the subsequent expulsion of Muslims, the ultra-nationalistic Young Turks that acquired power after the 1908 revolution believed that only a homogeneous state of unified Muslims and Turks could stave off further disintegration. On the eve of the First World War, the Turks deported 150,000 Greeks from the coast, and another 50,000 to the interior to Anatolia in the northeast, a process that continued throughout the war an took thousands of Greek lives. The conscription of Greek men into backbreaking labour battalions, the beatings, the hunger, the expulsions and killings accompanied by the confiscation of their wealth were a harbinger that awaited the Armenians albeit on a larger scale. According to Taner Akçan, who is the first Turkish historian to designate the genocide label for the miseries inflicted on the Armenians, the success of expelling large portions of the Greek population emboldened the leadership to embark on a “comprehensive scheme of ethnic cleansing that could allow the application of massive genocidal violence.”


Concentrated in Anatolia and scattered throughout the Ottoman Empire, the Armenians, who had already suffered brutal pogroms in the 1890s – they were more destructive than the assaults unleashed against the Jews in Imperial Russia – which erupted again in 1909, became increasingly vulnerable to deportation and murder during the war in a climate of fear that their country could be extinguished. Their fears were not entirely displaced considering that the Russian army was advancing across the Caucasus into eastern Anatolia. Believing Armenians to be internal subversives because of their ethnic and religious affiliation with the Christian Armenians across the border in the Russian Empire – some Armenians did volunteer for the Russian army because this historical moment might be the last chance to carve out an Armenian homeland in territory that straddled the Russian Ottoman border – the local population and the nationalists discounted the fact that large numbers of Armenian men joined and fought valiantly in the Turkish army.
The Young Turks magnified and exploited these fears by creating a Special Organization in Constantinople whose goal was "to separate the loyal from the traitors" by excising the "deadly illness" within the non-Muslim community.  Comprised of paramilitary gangs of convicted criminals, Kurdish tribes, and immigrants from the Balkans, they began their vicious attacks on the Armenian community in Anatolia – their brethren in the large cities of Constantinople and Smyrna (Izmir) remained generally intact likely due to the large foreign presence – shortly after the Ottoman Empire joined the war on Germany’s side. Using the pretext of a revolutionary uprising – a Turkish attack upon civilians in the city of Van was thwarted by armed Armenians – and the cover of the war – the allied landing at Gallipoli on April 24, 1915 provided sufficient justification – the ruling Turkish triumvirate put into effect their plans for the eradication of the Armenian presence in Anatolia by arresting in Constantinople that night over two hundred members of the political and intellectual elite and putting them to death. They subsequently authorized the paramilitary gangs to disarm and harass civilians, to torture, indulge in summary execution, burn Armenian villages, desecrate churches and commit whatever atrocities they deemed necessary on women and children. Outraged by their treatment, the American Ambassador in Constantinople (1913-1916), Henry Morgenthau, reveals the depravity of the terror when he wrote:

Instead of fighting the trained Russian army of men, they turned their rifles, machine guns,  and other weapons upon the Armenian women, children and old men in the villages of Van. Following their usual custom, they distributed the most beautiful Armenian women among the Muslims, sacked and burned the Armenian villages, and massacred uninterruptedly for days.

Morgenthau unsparingly describes a vicious form of torture, the use of the bastinado or iron rod that consists of the beating of the soles of the feet that eventually swell and burst in order to extract the confessions from the prisoners that they were “revolutionists,” and therefore a security threat. Armenian soldiers were taken out of their battalions, stripped of their weapons, and turned into beasts of burden before being killed in cold blood. The carnage continued when the Turks drove more than a half of million Armenians, primarily women and children, south through the desert of Syria depriving them of food and water so that hunger reduced them to an animal state with “claw-like hands” and “gaunt eyes.” Women were stripped of their clothes, humiliated and butchered; for many their only escape from death was a conversion to Islam and a life of slavery in a harem. Collective deportation with its attendant death toll among the old, infirm and very young was not unprecedented. What turned a crime against humanity into an exterminatory “genocide with its mass slaughter, abuse and mass starvation of an entire ethnic group” was the context of total war, a condition which the distinction between combatant and civilian was obliterated. In the genocide between 800,000 and 1.2 million died while local observers estimated that only fifteen percent survived the marches.  As a consequence, a long-established prosperous community that had for a long time elicited envy was ethnically cleansed because of their ethnicity and not for any crimes that they might have committed. The homicidal Minister of the Interior, Talat Pasha, admitted to a German newspaper the state’s intention to eliminate not only adults but children and future generations when he acknowledged that “those who were innocent today might be guilty tomorrow.”

Pasha’s admission set the tone for both the perpetrators and for those who shared complicity for these crimes. The corrupt and poorly paid Turkish army contributed in a subsidiary manner to the genocide by destroying Armenian villages while foraging for food. Germany who might have restrained her ally did nothing that might weaken the alliance; The German ambassador understood that his job had been to finesse the Ottoman Empire into joining the war on Germany’s side, and that nothing should be done to rupture the alliance. But German documents indicate that "the Turkish government is pursuing the aim of destroying the Armenian people." The British, French and Russians who were at war with Turkey issued a joint public denunciation, describing the killings as a “crime against humanity and civilization,” but beyond that they did very little believing that they had more pressing matters with which to contend. Despite their statement, the perpetrators committed their genocide with relative impunity allegedly prompting Hitler later to remark, “Who remembers the Armenian annihilation”? Regardless of whether Hitler made this statement, the Nazis admired the Turks for ridding themselves of an alien nation. Moreover, as their principal ally, the Germans had played a pivotal role in the Young Turk administration as advisors and perhaps as participants, and facilitated the flight of its leaders, including the chief architect of the genocide, Talat Pasha, to Germany in order to avoid Ottoman justice where he was fatally shot by an Armenian nationalist. German action and Allied inaction against the perpetrators combined to provide a precedent for the Nazi genocide. True, correspondents, particularly in America wrote detailed horrifying accounts which resulted in huge sums being donated for relief, and Lord Bryce himself compiled with greater precision than his Belgian report a vast collection of documents from neutral parties, which told a horrific story of the Turkish elimination of the Armenians. Morgenthau deviated from diplomatic protocol in his meetings with Pasha, in effect according to his memoir, interfering in Turkish internal affairs to a degree that might have clouded his judgment even when American interests were not at stake, when he attempted to pressure albeit unsuccessfully the Turkish authorities to desist in their “race murder” even though the Turks unlike the Nazis did not make rigid distinctions between religion and race as these categories often overlapped.

Yet the tragedy, which was on a much larger scale than anything suffered by civilians anywhere else during the war, received less attention in official Allied accusations. The American Secretary of State and the British Foreign Secretary tended to either accept the Turkish argument that it had legitimate security concerns or that the reports of massacres were exaggerated, views that were in stark contrast to particularly the British government’s reception to German atrocities in Belgium. In its thinking, atrocities that transpired in the west took priority over the application of terror against a racial minority in the east where the perpetrators were a junior partner of Germany. “‘Atrociousness’ denoted the importance of the enemy not the crime.”

Because the judgment of genocide continues to remain contentious, attitudes have not changed very much over the course of ninety years. There is little consensus between Turkish and Armenian scholars and writers over what transpired and the interpretation of those events. Turkish historians have admitted that atrocities were perpetuated in the context of war by a Muslim population infuriated by the treachery of Armenians, whom they regarded as a fifth column, but Akçan presents a slew of documents that demonstrate that the genocide was conceived by the Turkish authorities in Constantinople and implemented by a Bahaettin Sakir who was in charge of the Special Operation. For example, he quotes a senior Turkish officer who in 1918 provided written testimony to the Department of the Interior which was investigating allegations of genocide. He confirmed that atrocities

were carried out under a program that was [specifically] determined upon and  represented by a definite case of premeditation….They [the atrocities] were made possible primarily through the involvement of [Party representatives]…and secondarily through higher governmental officials who, abandoning their conscience and disregarding the law, allowed themselves to be co-opted by the Party and issued the necessary order.

Yet there have been hopeful signs for greater public discourse. One is the April 2006 decision by a private Turkish television station to show without cuts the 2002 film Ararat by the Canadian filmmaker, Atom Egoyan, about a young man whose life was changed by the making of a film about the Armenian genocide. Another is the decision in June of the same year by a Public Prosecutor in Istanbul to dismiss charges of “Insulting Turkishness” against the writer, Elif Shafak. The novelist had incurred the wrath of ultra-nationalists because two characters in his novel, The Bastard of Istanbul, allegedly defamed the Turkish spirit. But after the murder in January 2007 of the Turkish-Armenian journalist, Hrank Dink, by a radical Turkish nationalist, 50,000 mourners marched in solidarity and his funeral was attended by Turkish officials.
Posted by Robert A. Douglas at 10:26