The Nazi Disdain for Modernist Art

The following, for reasons of space and my decision to focus on the aesthetics of the beautiful during the 1930s, did not make the final editing cut in the chapter "Aesthetics in Nazi Germany" in That Line of Darkness: The Gothic from Lenin to bin Laden, Encompass Editions, 2013.

Notwithstanding his implacable hatred of Jews, Goebbels initially maintained a pragmatic view of artists; those who had been critical were allowed to create or perform provided they demonstrated loyalty to the regime. The same applied to well-known homosexuals who procured the patronage of a cultural apparatchik. His flexibility was most evident in the visual arts. His views were more complex than other Nazi leaders, especially Hitler, whose passion for it largely focused on neo-Gothic architecture and traditional nineteenth-century German genre painting, flecked with a spate of current erotic kitsch. As one of the more educated National Socialist’s potentates, Goebbels admired some forms of Modernist art, notably expressionism and artists such as the German, Emil Nolde and the Norwegian, Eduard Munch. Correspondingly, he viewed with distaste Volkish art, championed by ideologues such as Rosenberg, with its idealization of the peasant and its adamant opposition to non-representational art forms. Despite his retrograde philistine tastes, Hitler remained publicly silent on the issue until his unequivocal denunciation of Modernist art in a 1935 Nuremberg speech when he declaimed:

It is not the function of art to wallow in dirt for dirt’s sake, never its task to paint men only in
states of decay, to draw cretins as the symbol of motherhood, to picture hunchbacked idiots as
representatives of manly strength.…Art must be the handmaiden of sublimity and beauty and
thus promote whatever is natural and healthy.
Goebbels opportunistically accommodated his views to synchronize with those of his Führer, who had condemned Modernist art as an expression of racial decay akin to liberalism and Judaic-Bolshevism. Accordingly, the propaganda minister opportunistically turned volte-face and became more doctrinaire and bellicose toward any artist who deviated from the norms of “healthy Volkish” art. He really had no alternative since he could only count on his relationship with Hitler to keep himself in power. A malformed intellectual with a clubfoot, one leg longer than the other with a rodent-like face, he was the mirror image of the grotesque caricatures that often appeared in Nazi hate propaganda. But he also possessed a capacity for being a literate Lothario who knew how to dazzle women with quick-fire repartee, wit and compliments.  He understood that he was hated in a Party that adopted the emblems of masculinity and despised the intellect. With a nuanced shift, Goebbels’ propaganda machine overlapped anti-Semitism with the aesthetics of Modernism. Even though he scorned crude propaganda insisting that its aim was “to permeate the person it aims to grasp, without his even noticing that he is being permeated,” art was enlisted to serve the purposes of the state by channelling the imagination’s energies into the runnels of ideology.

The deployment of a Degenerate Art exhibition beginning in Munich in 1937 was the flip side to Riefenstahl’s Olympia in which graceful athletic bodies expressed the Nazi aesthetic of physical perfection. The exhibition implied the dangers to a community in the presence of physically imperfect bodies. It was particularly effective in harnessing the goals of the regime with the conservative tastes of the majority of people. Instead of proscribing Modernist art that Hitler in Mein Kampf had reviled as the “morbid excrescences of insane and degenerate men,” he and Goebbels decided to mount the massive show to defame Modernist art and inflame the passions of most Germans.  Hitler intuitively understood that most Germans regarded non- representational or abstract depictions of the human body with suspicion. They shared his contempt for outré artists and art that was “elitist and incomprehensible” and they agreed with his judgment when he declared in 1935 that these artists were “incompetents, cheats and madmen.” Why the "ugliness" and primitivism of modern art, its unconventionality and freakishness, its power to disturb and provoke, troubled Hitler so deeply might be explained by the consideration that it encapsulated everything he both feared in himself and everything he wanted to excise from Germany. It represented the antithesis of what he and most Germans craved: conformity, simplicity, security, conventional beauty, and perhaps most important, reassurance.

Given that the German Art Commission later ordered in March 1939 ordered the burning of over one thousand paintings, why did Hitler not ban it outright? Why did he continue to be so agitated and rant against it? Likely Hitler was hypnotically fascinated by the very art he despised as though it provided a mirror of his own soul. Perhaps sensing that the German public might experience a similar combination of revulsion and fascination, he temporized before finally giving approval to mount the exhibition. By organizing this extravaganza of nearly seven hundred paintings, sculptures and graphics, Goebbels was effectively able to engineer the revulsion and disgust he provoked. The Degenerate Art exhibition served Hitler’s ideological agenda of bashing everything epitomized by the Weimar era. It associated Modernist art and its creators with the cosmopolitan, despised Republic whose art supposedly assaulted family values, the sanctity of women and religion, mental health and patriotism, everything that was soulless and alien to the true German spirit. Weimar culture was a “Bolshevist” culture that was manipulated by Jews, whose goal was the destruction of society, even though only six of the over one hundred artists represented were Jews.

As with every other artistic vehicle to reinforce an ideological message, form supplemented content. To convey a sense of chaos and deformity, the organizers crammed the paintings helter-skelter onto walls, sometimes without frames, with no attention paid to lighting, and labeled them with insulting captions and the amount of taxpayer money that had been misspent. They covered the remaining space with inflammatory quotations from Hitler and Goebbels. The unflinching canvas, The Trench, a charnel house of body parts and decomposing corpses resulting from a bombardment, and the equally disturbing War Cripples by Otto Dix, himself a four-year veteran, were vilified as “a deliberate sabotage of National Defence” and “an insult to the German heroes of the Great War.” Both of these paintings disappeared and it is believed that the Nazis burned them.  The organizers massaged the prejudices of the prudish public by including expressionist paintings of women portrayed as whores that were labeled “An insult to German womanhood.” It was one thing to portray submissive nude women who could be distinguished by their Nordic cleanliness for the purpose of reproduction, as with, for example, the allegorical Four Elements, which Hitler hung above his Munich residence mantelpiece. It was something else to malign women, in the manner of a Grosz or a Dix, as prostitutes as if the world were a brothel of pimps and harlots. 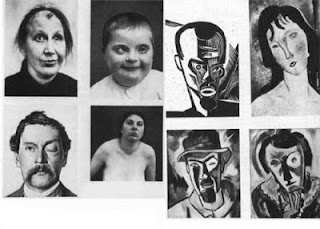 Perhaps the most significant and disturbing motif was the connection made between so-called degenerate art and mental illness. Artists who portrayed in Hitler’s words “misshapen cripples and cretins” (and) women who can only arouse “revulsion” were themselves stigmatized as degenerate. This perspective was underscored by the provocative juxtaposition of photographs of the work of schizophrenics with the photographs of expressionist works with captions such as “Which of these drawings is the work of an inmate of a lunatic asylum?” As early as 1931, Nazi art historians provided a linkage between modern art and mental illness or physical deformity. Public revulsion in the exhibition could be read as evidence that it accepted the relationship between classic beauty and health.

A similar technique was inserted by Fritz Hippler in his faux documentary The Eternal Jew in which samples of German art as inherited from the classical period the Medieval and Renaissance are interpreted as expressions of the eternal culture-producing Germans. In the background we hear music from Bach to reinforce the view that great art is German art. That is followed by a series of rapid-fire cuts of photographs of Modernist works, drained of their colour, which was so important to their vitality, and seen against an audio background of deliberately cacophonous jazz, concluding with a film clip of black male singers overlapping the paintings. We are manipulated to conclude that degenerate art and music are both Jewish and black. 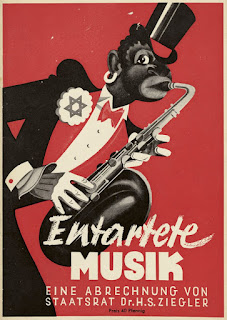 A yardstick for measuring the regime’s skilful manipulation of public responses as justification for vilifying and later purging Modernist art is the fact that this blockbuster show travelled to different venues throughout Germany and later Austria until the outbreak of war and was seen by nearly three million people. At the same time, the huge numbers could be interpreted as evidence of Hitler’s nagging doubt that the exhibition could be counter-intuitive by tantalizing and seducing the masses. The crowds who thronged to the museums to see this show vastly exceeded those who saw the Great German Art Exhibition that was exhibited simultaneously. Regardless, the defamation of modern art, particularly its linkage with mental health may have helped to strengthen support for the regime’s social policies of sterilization and by 1939 euthanasia. The disgust of the majority of viewers for this art was a possible mirror of their revulsion toward the mentally ill. But the Nazis’ main success lay in reinforcing populist prejudices against anything alien and cosmopolitan that threatened traditional German values.