In the final epilogue of That Line of Darkness: The Gothic from Lenin to bin Laden, Encompass Editions, 2013, I spent only a couple of paragraphs on the Egyptian Muslim Brotherhood and I wondered whether I needed to qualify anything I have written. Having recently encountered The Arab Uprising: The Unfinished Revolutions of the New Middle East (New York: Public Affairs, 2013) and his blogs by the esteemed scholar, Marc Lynch, it seemed appropriate to determine whether I got it right and whether recent events since my book's publication would alter anything I wrote about the Brotherhood. Basically his assessment is not all that different than mine but I would agree with him that the Brotherhood's incompetence has not done anything to improve the economy, the key issue for most voters, and that they have alienated a number of their supporters by their undemocratic behaviour. 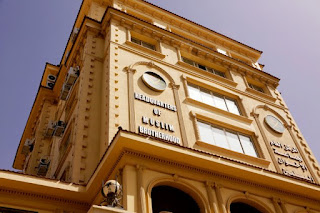 Lynch confirms that the Brotherhood and al-Qaeda were mortal enemies; the former denounced terrorism and the concept of takfir in which extremists branded their enemies as non-Muslims. participation. The autocratic Mubarak regime had to go; hardly a week passed during the 2000s when there was not a protest against its corrupt electoral politics, its stalled economy and police practices. No iron-fisted dictator could ever rule Egypt again because the people have lost their fear. He believes that it was right that America made no attempt to prop it up in the same way that Gorbachev failed to rescue Honecker government in East Germany. It should have surprised no one that the Brotherhood was able to take advantage of the political space that opened up and was able to achieve the electoral results that did. Islamism had been transforming Arab culture for generations and it was not going to disappear. Lynch also supports the move of the Salafis, who spent decades denouncing democracy as an affront to God, to organize politically and move the party into the mainstream.One of the consequences, however, of these Islamists in the political arena has been to highlight their differences. The Salafis regard the Brotherhood as insufficently Islamist, too pragmatic and a creature of the urban middle classes while the Brotherhood  regard the austere Salafis, financed by the Saudis, who advocate rigid dress codes, a simplified form of Islam and extremely conservative societal norms as obstacles to tourism and foreign economic investment.

But since the Islamists have achieved power, they have done little to endear them to the electorate. One result achieved by President Morsi has been to force the retirement of senior military leaders and the abrogation of controversial amendments that would have limited the President's powers making it possible to move toward civilian rule. Lynch does not dwell on specific issues in The Arab Uprising but on his blogs he laments the failures of the Islamists.

What has most surprised Lynch is the incompetence of the Brotherhood since the parliamentary election that gave them the most seats. It has presided over an economic tailspin while they wasted their energies investigating a comedian that allegedly insulted the President Morsi. It has failed to make the painful but necessary economic reforms. He is also alarmed by the Brotherhood's attempt to place restraints on human rights groups illustrating the tension between their liberal aspirations and illiberal inclinations that exists within the Brotherhood. At this point, the electoral support for the Brotherhood has dipped to about twenty-five percent of the electorate, down substantially since the election. Lynch's conclusion in The Arab Uprising carries much greater weight now: "Long term Muslim Brotherhood domination is far from a certainty, any more than was eternal military rule."