Deprivation, crime and repression in the Stalinist era

The following piece was not included in That Line of Darkness: The Gothic from Lenin to bin Laden (Encompass Editions, 2013) for reasons of space. 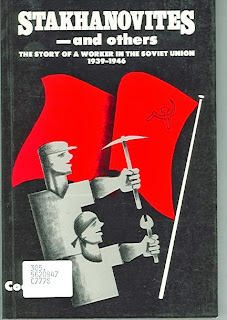 For those workers, who were not Stakhanovites,(highly productive workers who exceeded their quotas) resentment toward the regime festered as the pressures in their work lives increased. Since 1928, the labour unions had lost all bargaining power; instead they became enforcers of labour discipline in the fight against loafing and absenteeism. This translated into a focus on speed ups in production, over-strain on the machinery, ignoring the dangerous conditions of work and bypassing safety precautions in order to achieve target quotas. Macho managers acting like “little Stalins” would bark orders, bully, intimidate and hurl obscenities, anything it would take to satisfy their superiors in the hierarchical structure of a command economy. According to one of Stalin’s closest associates in the Politburo, the sycophantic Lazar Kaganovich, “the earth should tremble when the director is entering the factory.” Often alienated by their managers, workers also experienced a deepening sense of betrayal as punitive worker codes were introduced in the late 1930s to punish any lateness, drunkenness and absenteeism with dismissal (and the removal of ration cards). In 1940 these offences were criminalized and thousands of offenders, including Communist party members, were sent to work camps. A rash of suicides followed some leaving suicide notes behind expressing their distress at being sent to a work camp for being late often because of queuing for essentials or being drunk.  But as trying as life was at work, even if the worker did not violate the labor codes, it was exacerbated by his difficulty in securing the basic necessities of life.

If state employees were not model workers or engineers, administrators or Party officials with access to influential contacts or privileged stores where they could acquire caviar, sausages and pastries, they were daily preoccupied with finding basic food and consumer goods. In Western Siberia, people queued for most of the night in the freezing cold for a loaf of bread. Nerves frayed beyond endurance, with fist fights and knifings a common occurrence. Clothing and shoes were even harder to obtain than foodstuffs, and what little could be purchased was in such poor shape that handles, for example, fell off pots and shoes fell apart after the first wearing. The abysmal quality was a direct result of a state decision to ban artisan activities. The consumer had no choice but to rely on state industries because, throughout Stalin’s era, the production of consumer goods remained a low priority behind heavy industry. The chronic shortage of goods generated complaints, but the state response was predictably to search for scapegoats and accuse counter-revolutionaries of “wrecking.”

The massive internal migration of the period and the search for housing exacerbated social disorder. The flight of millions of peasants, who were fortunate to escape the countryside before the famine and the passport system to the cities, placed almost impossible demands on local municipal authorities. To accommodate the tidal wave of migrants, the police, armed with extra-judicial authority and an arrest quota often bypassed the clogged court system and deported thousands of “parasites” who were class enemies, criminals and “social harmful elements.” The social cleansing provided some living space, but with the urban population doubling between 1926 and 1939, the perennial housing shortage became more acute as living space norms per person fell by one third between 1929 and 1931. Unless one was a Party functionary or a manager, the chances of acquiring decent living quarters were minimal. In a dose of revolutionary schadenfreude, local functionaries humiliated bourgeois families by forcing them to give up part of their apartments to proletarian families. Most urban people lived in cramped and substandard tiny communal flats, with one or more families living in a room with a sheet dividing them, sharing the kitchen and toilet, if one existed, with other families. Most Moscow flats had no bath and one third had no sewer connections. Most new urban residents found themselves living in appalling barracks, dormitories or even mud huts. With former peasants no longer subject to the traditional mechanisms of village control, epidemic of violent crimes, hooliganism, rape, alcoholism, and wife beating overwhelmed the urban environment. Material privations fed gossip, surveillance and open violence. Motivated by a desire for more space, neighbors denounced others to the authorities as enemies of the people or someone with “bourgeois inclinations” and the criminality prompted political authorities to implement severe sanctions.

One barometer of the awesome economic and social changes, along with an increasing disrespect for state property, was the galloping crime rates in armed robbery and murder and the state’s draconian response. It has been plausibly argued that the threat to public order in the 1930s and the police response to it provide a bridge from the violence associated with collectivization, dekulakization and forced industrialization to the Terror of the late 1930s. Because the state was never able to resolve the contradictions that arose between the need to control chaos resulting from the early Stalin era and the overall ethos of relaxation in regime policy during the Second Five Year Plan, the police never lost the power to sentence "dangerous elements." The violence from the upheaval of the early period did not burn itself out simply because of official policies decreed in the mid-1930s. Juvenile delinquency reportedly increased by one hundred percent between 1931 and 1934. Hooliganism was rampant not only in the shantytowns under construction but in the larger cities.

With the introduction of passports, the police possessed greater latitude to raid apartments and to conduct searches to identify “harmful” elements perceived to be threatening public order then to send the vast majority to concentration camps for up to three years. Under that rubric resided speculators, those who bought consumer items and resold them for a profit, kulaks fleeing the countryside, dangerous hooligans and anyone who was not performing socially useful work such as homeless children, beggars and prostitutes. The children were sent to overcrowded and under-funded homes or rural communes. The police were further empowered to shoot all armed robbers, arsonists and murderers.  In 1937 Stalin authorized the mass operations that required local authorities to submit separate estimates of the number of kulaks and criminals to be exiled or shot. The NKVD chief, Nikolai Yezhov, authorized the immediate execution of 70,000 and 186,500 for deportation.  Arbitrary exile often meant deportation to remote regions with inhospitable conditions where labour was needed. What this overview suggests is that a large segment of people who were purged, were not only those who engaged in political crimes, but were those who had committed regular crimes, many of whom were targeted because they were not classified as being productive members of society. In sum, large numbers of social undesirables from the marginal strata of society were summarily “cleansed” not for what they had done but who they were based on the premise that they might commit crimes in the future.