The following piece was omitted from That Line of Darkness: The Shadow of Dracula and the Great War (Encompass Editions, 2012) for reasons of space.

The blood libel—the totally irrational and groundless belief that Jews murdered Christian children and mixed their fresh blood into the matzoh and/or wine for magical and redemptive purposes to celebrate the Passover—has a long history in England. It originated in a pogrom in 1144 after a Jew was charged with the ritual murder of a child. About one hundred and fifty years later it was prominently featured in the Prioress’s Tale in Chaucer’s Canterbury Tales even though Jews had been expelled from England for generations. The Prioress passionately recounts the tale of a heinous crime: a child’s throat is cut and the body thrown into a cesspit used by Jews to purge their bowels. Because the "damnable race" is cursed, and justice demanded "the blood cries upon your fiendish crime," the Jewish perpetrators were torn apart by horses and hanged according to law. Later, during the Renaissance, when it was widely held that Jewish males menstruated, the blood libel ritual was touted as providing Christian blood to replenish that lost in menstruation. The Jews, therefore, shared with the Irish the stigma of being classified as ‘essentially feminine’ and bearing the taint for being a physically degenerative influence. 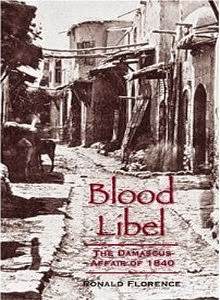 Later in 1840, after a friar Father Tomaso and his servant disappeared without a trace in Damascus, the blood libel charge resurfaced, leading to an inquisitorial de facto trial of prominent members of the Jewish community including rabbis. Under brutal torture four men died: reportedly, one of them as a result of five thousand lashes. Other confessions extracted under torture were offered as evidence, and ten of the accused awaited execution after being declared guilty by the Islamic viceroy of Egypt who controlled Greater Syria.  The physical threat to Jews in Damascus, and the temporary seizure of sixty-three Jewish children as hostages, so as to pressure their parents to reveal the location of the stored blood, transformed a local matter into an international cause celebre. What drove the months of interrogation was the support of most members in the European consular community in Syria. The French consul in particular remained convinced of the Jews’ guilt, both that they were murderers and that human sacrifice was an integral part of Judaism. The English consul reported to his superior, foreign secretary, Palmerston, that the Jews were unquestionably guilty. Notwithstanding power struggles in the region and his support of the Sultan in Constantinople over his subordinate in Alexandria, Palmerston, repelled by the accusation and the tenor of irrationality surrounding the case, officially denounced the blood libel allegation.

While most English press argued that the condemned men were victims of a medieval witch-hunt, the venerable Times, not only gave the case extensive coverage, but also proclaimed that the charge and the guilt should be an open question. Offering balance, the newspaper printed documents and letters to support the charge, including a declaration, purportedly written by a former Rabbi, that Holy Scripture required Jews to commit ritual murder. Under the guise of impartiality, The Times provided an outlet for undercurrents of bigotry that normally would not be expressed in a prestigious newspaper. Ostensibly taking the high moral ground by keeping an open mind, their coverage had more in common with the gutter press in France and the German states where new press freedoms were being used to pander to the prejudices of a growing reading public. For example, one newspaper, from the ultra-Catholic French press, averred that even if the facts did not fully support the charge, the Jews had conducted these ritual murders in the Middle Ages. For the reader insensitive to nuance, the implication was that a people could never escape their history and were likely to repeat historical crimes.

Although power politics may have entered into Palmerston’s decision to support the Jewish community and condemn the allegation, the French Government of Adolphe Thiers was motivated entirely by state considerations. Thiers’ realpolitik was not going to permit the fate of a few tortured individuals, even when he harbored no special animus toward the Jews, to prevail over French national interest and the consolidation of its empire. Unlike the clerical press, Thiers’ overriding goal was to strengthen the French influence in the region by remaining an ally of the viceroy of Egypt in his struggle against the Sultan of the Ottoman Empire. To that end, he refused to repudiate his diplomats’ conviction of the Jews guilt. The viceroy interpreted that decision as French support for his regime. Despite Thiers lack of cooperation, an international committee, that included a prominent English and French Jew, interceded to secure the release of the remaining prisoners. The Viceroy’s decision, however, was coloured more by international pressures—the threat of war from Britain, Austria and Russia which he feared would jeopardize his power—than with a principled condemnation of the ritual murder charge, any attempt to clear their reputations through a retrial or seek the real culprits. Moses Montefiore, a British representative on the international committee, received from the Sultan a written repudiation of the blood libel charge and a promise that Jews would enjoy the same privileges as any other religion.  Nonetheless, what happened in Damascus demonstrated that a rebroadcast of the ritual murder charge could easily be accepted, not only in Paris but all over Europe. Despite the disavowals by monarchs, Popes and scholars, the canard could not be permanently laid to rest.

In large part the persistence of the blood libel can be explained by the attitude of the Roman Catholic Church. Although in the early 1870s, the Vatican repudiated Catholic newspapers challenging it to prove its allegation, in the last two decades of the century, through its newspapers and leading spokesmen of the Church, it increasingly used shrill language to denounce the alleged Jewish threat. In June 1881 a Jesuit periodical launched a barrage of articles, one of which asserted that the Talmud commanded the Jewish race to kill Christians because they needed their blood at Passover and cited as proof the case of Father Tomaso of Damascus. Despite the well-known fact that the accused had confessed under grueling torture, subsequent articles published testimony from the 1840 trial that had in his mind clearly demonstrated the guilt of the accused Jews.

In the next decade, priests continued their assault on Jews by incorporating racial anti-Semitism and keeping alive the canard of ritual murder. Not only were they responsible for economic failures while amassing most of the wealth in Italy through "constantly oppressing and robbing Christians," they were hatching a conspiracy for world domination. But the priest, a Father Rondina, reserved his greatest venom to demonstrate that Jews were responsible for ritual murders, and that they took particular delight in murdering children and draining their bodies of blood. At Passover so much blood was needed for them to perform their diabolical rites that a child’s blood could do. In his demonization of the Jews, however, he revealed his relish in recounting their grisly details of torture and sadism.  Accordingly, it was not enough for Jews to murder children, but "for the health of the Jewish soul it is necessary for the little child to die amidst torments" with the child being killed by “needles struck into them, or were cut up piece by piece, or crucified.” When the last drop of the boy’s blood was drained, it was “kept by the local Rabbi."
The preoccupation of the Vatican to malign Jews as ritual murderers revealed itself whenever it commented on a trial of a Jew tried with this heinous offence. Convinced of the Jew’s guilt ever before a verdict had been reached, the Vatican daily could only explain acquittals as evidence that the Jews had bribed the judges and that the “judiciary is entirely in the synagogue’s control.” In another case where the accused was acquitted, the same newspaper warned the Jews: “Content yourselves… with the Christians’ money, but stop shedding and sucking of their blood.” When the chief rabbi of Rome wrote a letter denouncing the charge of ritual murder, the Vatican editorialist acidly commented that the rabbi might serve the “miserable race of Judah” if he told his depraved people to stop concealing the fact that they “murder Christians to use their blood for their detestable rites.” In the early 1890s, barely a day went by without one of the Catholic dailies reporting or commenting on the latest graphic details of a ritual murder, and many Catholic newspapers in Austria, Germany, Italy and France reprinted extracts from them. One of the shrillest purveyors of the ritual murder charge was the Milan Catholic daily that repeatedly regaled its readers with gruesome descriptions of how Christian children were murdered by Jews. When its director received a private audience with the Pope Leo XIII, he reported to the press His Holiness’ “most beautiful expressions of satisfaction.” The Pope’s blessing enhanced its influence among anti-Semitic politicians in Germany and Austria who cited with approval the paper’s editorial position when they addressed their own Parliaments on Jewish ritual murder. The imprimatur of the Pope assured that the blood libel would remain part of the public discourse in Catholic countries. But it continued to surface also among non-Catholics.