The American military learned that men will inevitably go mad in battle and that no appeal to patriotism, manliness or loyalty to the group will ultimately matter.
—Paul Fussell, Wartime

“It doesn’t get to me very often except when I talk about it, and I seldom do that. It’s just something that does not go away. It’s something you have to endure the way you endured the war itself. There’s no alternative. You can’t wipe out these memories. You can’t wipe out what you felt at that time or what you knew other people felt. This is part of your whole possession of life. And I suppose it does some good.
—Paul Fussell, quoted in The War: An Intimate History 1941-45, Geoffrey C. Ward and Ken Burns

I have had a wonderful life….But the dynamics of war are so intense, the drama of war is so emotionally spellbinding, that it’s hard for you to go on with a normal life without feeling something is missing. I find there are times when I’m pulled back into the whirlpool. The intensity of that experience was so overwhelming that you can’t quite let it go.
—Quentin Aanenson, quoted in The War

For my review of the book and the film Railway Man that explores "battle fatigue" after the Second World War see
http://www.criticsatlarge.ca/2014/05/from-memoir-to-film-railway-man.html


John Frankenheimer directs Burt Lancaster in the tense black and white spy thriller The Train (1964). Lancaster plays Labiche, a French railway inspector. Allied forces are threatening to liberate Paris, so Col. Franz von Waldheim (Paul Scofield) is ordered to move the priceless works of art from the Jeu de Paume Museum to the fatherland. The head of the museum (Suzanne Flon) attempts to convince Labiche that he should sabotage the train on which they are transporting the art. Labiche is more focused on destroying a trainload of German weapons. After his friend is killed trying to stop the train with the art, and after a consciousness-raising conversation with a hotel owner (Jeanne Moreau), Labiche resolves to save the antiquities. This film is much better than the recent Monuments Men

Imaginary Witness: Hollywood and the Holocaust (2004) is the riveting story of the American film industry's complex and fascinating response to the horrors of Nazi Germany. Utilizing carefully selected excerpts from extraordinary and in some cases rarely-seen films, and told through the first-hand accounts of the directors, actors, writers, and producers, the film covers some of Hollywood's most important movies, including The Mortal Storm, The Great Dictator, The Search, The Diary of Anne Frank, The Pawnbroker, Judgment at Nuremberg, Sophie's Choice, and Schindler's List. The film takes us from the American ambivalence and denial during the heyday of Nazism, through the silence of the post-war years, and into the present day. It asks hard questions: about the uneasy relationship between American popular culture and the Holocaust, about the responsibility of filmmakers in their portrayal of history, and about the power of film itself to affect the way we look at ourselves. 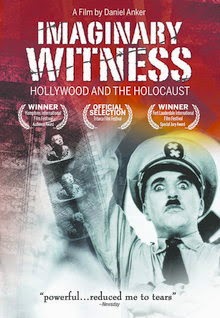 For my review of Hannah Arendt see http://www.criticsatlarge.ca/2014/03/hannah-arendt-limits-of-thinking.html

courtesy of Guy Weissberg http://jewishreviewofbooks.com/articles/1287/in-still-not-banal-a-response-to-seyla-benhabib/
Posted by Robert A. Douglas at 11:03