The Impact of Aesthetics in Simon Mawer’s The Glass Room

This review originally appeared in Critics at Large and I reproduce on this site because That Line of Darkness: The Gothic from Lenin to bin Laden (Encompass Editions, 2013) has several chapters on National Socialism ideology and its consequences and because one of its chapters explores Nazi aesthetics. In the book under review, aesthetics offers a stark counterpoint.


Simon Mawer is adept at reimagining and creating powerful storylines from history. His recent espionage novels,The Girl Who Fell from the Sky and Tightrope, are a tribute to the female resistance fighters in World War Two and an exploration of the nuclear politics of the early Cold War. In a somewhat different manner, his superb 2009 Booker Prize finalist, The Glass Room (Little, Brown) is inspired, as the author acknowledges, by the history of a cultural landmark, the Villa Tugendhat, currently a museum in the Czech Republic. It was once owned by a wealthy Jewish couple who were forced to flee to Switzerland when the Nazis incorporated Czechoslovakia into the Third Reich and the house itself was appropriated by the Nazis. Then it was confiscated by the Soviets who used it as a ballet school and a clinic before the Czech Republic acquired and renovated it and transformed it into a museum.

Mawer’s novel loosely follows the history of this “jewel of modern domestic architecture,” but in his reworking, he uses the house as a literary device to examine the dreams and illusions of its various inhabitants. The cool rationality and beauty of this exemplar of minimalist architecture serve as a counterpoint to the conflicted emotions of those who live within its spaces, compounded by the combustible forces of six decades of twentieth-century Central European History, much of it tragic. Almost the entire plot takes place within its shimmering spaces. When the narrative strays beyond it, the actions of the characters are a response to the luminescent architecture and its centrepiece, the Glass Room. As a result, a house, or more specifically a room, becomes the principal character in a novel that marries plot with aesthetics, but the aesthetics is not burdened with heavy-handedness or pretension. 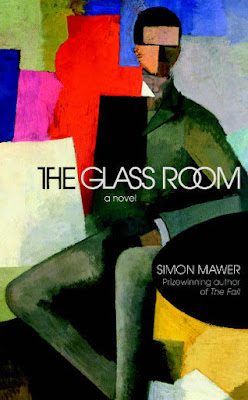 The novel opens with Liesel Landauer revisiting her former home in the Czech Republic after many years of exile before looping back to her marriage to Viktor, a wealthy Jewish car manufacturer. The couple has been granted a gift of land by Liesel's parents to build their own house. They are on their honeymoon in Venice in 1929 when they meet and commission an architect to build a home for them in Czechoslovakia that embraces the aesthetics of the Modernist Movement and the rational spirit of 1920s Europe. For his new married life, Viktor requires a space that represents the future: a place of clarity, openness and light, a house of glass girded by steel. And the result is an avant-garde masterpiece with its floor-to-ceiling glass walls, its white ceilings and white floors, and a spectacular wall of golden onyx. Brimming with idealism and enthusiasm, he believes the house exemplifies the "dream that went with the spirit of a brand new country ... a state in which being Czech or German or Jew would not matter, in which democracy would prevail and art and science would combine to bring happiness to all people." We know of course that his dreams are illusions that will be shattered.

It is not only the historical convulsions that rudely disrupt the lives of its residents. The transparent and rational architecture is at odds with people who are ruled by their passions and cannot abide the light of full disclosure even though they are ostensibly attracted to it. While Viktor proclaims that their open house will be a place “where there will be no secrets,” he discovers that parts of his life must remain cloistered as he begins to fall in love with a prostitute he met on his business trips to Vienna. For her part, Liesel is shocked at her feelings for her friend, the omnisexual Hana, the individual with perhaps the fewest secrets to hide. What becomes most disturbing to Liesel is that Hana becomes more important in her life than Viktor.

As Europe dissolves into irrationality and war, Viktor flees the Glass Room with his family first to Switzerland, then slowly across Europe towards Bilbao, before sailing to America. But the building remains, like a mute Greek chorus, to witness again whatever occurs within its walls. In the second half of the novel, as history comes to the house, Mower offers us a revolving door of characters through different historical eras, again using the Glass Room to expose their illusions. The power of the place is extraordinary as each new occupant is affected by the glass room's quiet power often forcing them to reveal their true self. People pass through “like summer mayflies with their gossamer wings and delicate tails and ephemeral lives,” even though the house endures, despite the vicissitudes of history, including the bombings of World War II.

In one of the most unsettling but riveting sections, a German geneticist, Stahl, sets up his laboratory in the abandoned house in order to compile a massive anthropological database with the goal of confirming Hitler's racist ideology. His work appears cerebral as he measures and photographs exemplifying "the cool gaze of scientific objectivity" to determine what “defines human and subhuman,” supposedly fitting in “a place of balance and reason.” His need to measure his subjects with exact precision certainly complements the perfect dimensions of the glass room. But like everyone else who lives in this glass room, the Nazi scientist finds that such bright exposure makes him more determined to conceal the darkest aspects of his life. Hana is successful in ripping off Shahl’s pose of scientific objectivity by revealing his ugly, vengeful side – for which she pays a heavy price.

Hana is a survivor and through her we meet a new set of characters, perhaps the least interesting in the novel, who occupy the Glass House space after the liberation by the Soviet army. During the communist era, it serves as a rehabilitation unit for children with polio. But the final section is highlighted by two scenes that occur years apart, one during the Prague Spring and one after the fall of communism when the house is transformed into a museum. Individuals drawn by the power of their memories return to the Glass House. They are moments of quiet but powerful emotion, scenes of recognition and reconciliation, appropriately set in “an ageless place … that denies the existence of time,” and a reminder of the transient nature of human existence.
Posted by Robert A. Douglas at 12:58