This review, originally published in Critics at Large, is posted on this site because the novel explores the emotional costs of transgression  both for spies and a would-be-terrorist.

Among them is Cumming’s nuanced and rounded portrait of the Russian agent Alexander Minasian. Cumming’s narrative lens that tracks the Russian’s spycraft in War is kept at a distance; we experience him only in his capacity as a professional at his work. In Spy we see him close-up as Cumming inhabits his perspective. The author is superb at limning Minasian’s motivations for becoming an officer – he lived through what Russians experienced as the West’s humiliations of Russia during the 1990s after the implosion of the Soviet Union and his subsequent desire to serve and strengthen his country – his gnawing, not-always-articulated doubts about the current direction his country is taking, and above all, his personal vulnerabilities. 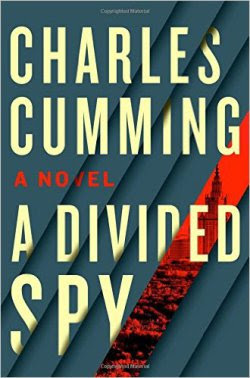 Minasian was off the MI6 radar until Harold Mowbray, a private contractor working for the agency, spotted him at a luxury resort in Egypt with another man, somebody with whom he was clearly involved in a sexual relationship, one in which their difficulties were on public display. As Mowbray relays this information to Kell, the retired spy begins formulating a plan to get close to Minasian by using this German named Bernhard Riedle. With the approval of his MI6 handler, Kell sets his plan into motion. Using a veteran spy trick, Kell ingratiates himself with the jilted, angry Riedle while concealing his true identity and motives. Eventually, he gains enough trust from Riedle for the German to ventilate his aggrieved hurts and brewing anger about his tumultuous affair with the Russian spy. Then, suddenly, a murder occurs in London that brings Kell and Minasian into personal contact with each other. At first Kell thinks he can blackmail Minasian into turning him against his superiors and recruiting him. The Brit knows that anyone with his counterpart’s sexual proclivities, and worse, the son-in-law of a powerful oligarch who wants grandchildren, would not be tolerated in Putin’s intelligence services. Kell is wrong as Minasian’s loyalties are deeply entrenched, but he is willing to collaborate on issues of mutual interest such as terrorism without sacrificing his integrity and dignity. (At this point, I was reminded of Trump’s desire to work with Putin under similar conditions, but I am certain that neither of these leaders possess the capacity for self-reflection that Kell and Minasian demonstrate.)

The novel at this point takes a sudden shift in tone and pacing. Kell’s lust for revenge must be put aside when he learns from Minasian about a major terrorist attack that will soon take place in England, something the reader has known since almost the beginning of Spy. A young aggrieved British-born Azhar Ahmed returns home after being radicalized in Syria. He has fully internalized what Maajid Nawazs, in his memoir, has called “the narrative.” He is a soldier in a war on a holy mission that will avenge the Prophet for which he will be eternally rewarded for his martyrdom. He has been instructed to carry out a suicide attack that will inflict massive civilian casualties, and is waiting for the signal. Cumming throws a brilliant curve into this subplot by introducing a young white woman who becomes Ahmed’s girlfriend. This relationship inadvertently subverts the rigidity of his ideological worldview and creates personal confusion in the young man’s mind revealing a vulnerability that will make his task more difficult to execute. Through this device, Cumming demonstrates that powerful personal connections hold the potential for undercutting ideology and the impulse to wreak revenge on one’s enemies. The relationship between the two young people in a sense mirrors that of Kell and Minasian.