This piece appeared in Critics at Large 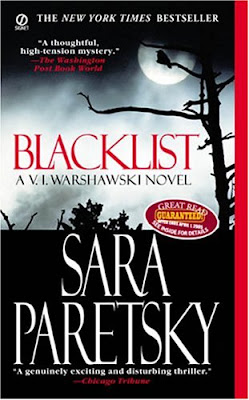 “‘Welcome to the police state,’ Rebus added. ‘They pulled that…stunt…because they could.’
‘You say “they” as if we are not on the same side.’
‘Remains to be seen, Siobhan.’”
—Ian Rankin, The Naming of the Dead

When national security issues and protection of the privileged and powerful override constitutional protections and the rule of law, is that society in danger of becoming a proto-police state? This is the question raised in two excellent political crime novels by the Chicago writer Sara Paretsky and her Edinburgh counterpart Ian Rankin. Blacklist (G. P. Putnam’s Sons, 2003), Paretsky’s eleventh outing of her feisty private investigator, Vicky Warshawski (V. I.), is set against the backdrop of post-9/11 America, when the Patriot Act provided overzealous officials with powers from Homeland Security that threatened civil liberties guaranteed by the Bill of Rights. Paretsky’s story spans over fifty years going back to the blacklist period of the 1950s, a broad tapestry which enables her to draw a direct line between the fear generated by the politics of McCarthyism and the politics of fear in an America traumatized by a major terrorist attack. One common link between the historical eras is race, and whether racial minorities – in this case, blacks and Muslims – receive justice in America. Rankin’s sixteenth John Rebus novel, The Naming of the Dead (Orion Books, 2006), is set in 2005, during the week of the G8 Gleneagles summit outside of Edinburgh and the London Tube bombings. The protection of the politically powerful meant that vast numbers of security forces invaded Edinburgh and were empowered to suspend the normal rule of law, which resulted in the flouting of their power and the intimidation of citizens, including, in Rankin’s novel, the truculent Rebus. Both novels question the balance between freedom and safety when the perpetrators of violent crimes are apparently able to elude justice by exploiting their privileged status and the fear of the time. 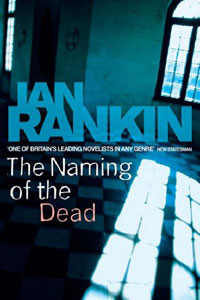 Blacklist kicks into action when Warshawski receives a telephone call from a well-heeled client asking her to investigate a complaint made by his ninety-year old mother that she has seen lights on in the attic of their former family estate from her nursing home window. When she arrives at night in New Solway, a gated retirement community outside of Chicago, she surprises a teenage girl and stumbles into a pond where she discovers the body of a black journalist. In the process of identifying the girl and the journalist, V. I. tangles with an old-moneyed set and discovers their bitter ideological rivalries and betrayals between the far right and far left that go back to the McCarthy era, specifically to the activities of the House Committee on Un-American Activities (HUAC) who were hunting people they perceived to be communists. The journalist Marcus Whitby was a respected writer researching a story on a black dancer, who, after a period of fame, became a victim of the blacklist; she lost her teaching position and was forced to decamp to Africa in order to save her career. When Whitby travelled to the exclusive ultra-posh suburb to check on the veracity of what would be damaging revelations, he was killed. The local cops initially attributed his death to a misadventure or suicide, but V. I., hired by the Whitby family to find the truth, uses her resources, including an old friend of her late-father cop on the Chicago police force, to discredit this cover story.

In the meantime, the girl is the granddaughter of a powerful wealthy family who takes it upon herself to hide a frightened Egyptian teenager whose passport has expired, and who is branded as a terrorist by the rush-to-judgment media. She understands that the federal officials and police who are hunting him “don’t like his race, creed or place of national origin.” V. I. suspects that he may have seen something the night that Whitby was murdered and someone else may be also trying to find and silence him. When Homeland officials suspect that V I. may know something about the whereabouts of the boy, she realizes her phone could be tapped without a warrant and that she could be detained indefinitely and held incommunicado. When she does surrender to the authorities, her responses to her inquisitors are not dissimilar to unfriendly witnesses that appeared before HUAC years before. She explains her fear about the Patriot Act: if her lover, a reporter in Afghanistan, were to die, her heart would break, she says, but “if the Bill of Rights is dead, my life, my faith in America, will break.” The response to terrorism, she believes, is a greater threat than terrorism itself.
V. I.’s liberal sensibilities (like those of her creator) are clearly evident in her investigations at New Solway. Her sympathies are with an aging liberal philanthropist who, in an earlier era, brazenly testified before HUAC. As a young law student, she heard him speak and was immensely impressed by his eloquence and easy charm. But as a good investigator, she follows the evidence regardless of her ideological leanings. She discovers cowardice, betrayal and injustice during the 1950s and links them to the current murders. She identifies the culprit but because of the volatile emotional climate of the time, the race and ethnicity of two of the three murder victims and the influence of the perpetrator, it is not clear by the novel’s conclusion whether justice will be served. Blacklist is primarily a social commentary (and this is not a criticism) masquerading as a mystery.

The Naming of the Dead is more overtly a geopolitical novel with its depiction of the rule of law under threat in Scotland and recognition that decisions made by the G8 impinge on the larger world. The title comes from a ceremony during the protests in which the names of a thousand victims of the Iraq War are read out. Unlike V. I. Warshawski, John Rebus is a detective working in the Edinburgh police force. But because of his insubordination, he is mistrusted and operates, as Rankin has acknowledged, as “almost a private eye within the police force.” During the G8, the maverick Rebus and his younger junior partner and close friend, Detective Sergeant Siobhan Clarke, are sidelined and not allowed near the world’s leaders. This reprimand allows them to operate on the fringes and observe how the police respond to protestors, both the peaceful and the more militant. The police who arrive from across the UK demonstrate their gung-ho presence with “visors and truncheons and handcuffs; horses and dogs and patrol vans,” some with their uniforms’ identifying marks removed. The initial protests are benign but the spectre of a massive police force is a provocation. As the crowds surge to 200,000, the demonstrations, abetted by anarchists willing to wreak havoc, escalate into mayhem and violence in which the centre of the city becomes “a war zone.”

Rankin’s account reminded me of what occurred during the 2010 G8 Toronto summit when the line between different kinds of protestors became blurred. There, one thousand protestors were arrested over the course of the week and a few people were badly hurt. But Edinburgh is a much smaller city and its citizens, given their history, fear they are under siege from invaders, an apprehension that is not misplaced. The security forces, some of whom operated in Iraq as a private army, abuse their powers with impunity. Rebus is physically assaulted and thrown into a jail cell; he exacts some measure of revenge on its ringleader at the end of the novel. Clarke’s aging hippy parents are innocent protestors. When her mother is assaulted, causing her to be hospitalized, Clarke becomes distracted from her job and consumed by the need – in part to validate her career choice to her parents – to identify the attacker. Even when that person turns out not to be a riot cop, she receives no official support. Consequently, she compromisingly entangles herself with the city’s thuggish crime boss. When she tries to explain her Faustian pact to Rebus, she says, “He was offering me something I knew I wouldn’t get from the law. You’ve seen this week how the rich and powerful operate…how they get away with anything they like.” One of Rankin’s themes is that when the rule of law is frayed, it encourages people – in Naming it is primarily police officers – to take the law into their own hands.

Another theme is that the rule of law applies to everyone, from the most powerful to the worst in society, its rapists, murderers and terrorists. When the first of three recently-released criminals is found murdered near the location of the summit, it is left to the wisecracking Rebus and Clarke to track down their killers without any assistance. A stretched police force is not going to be too worried about a killer who seems to be doing them a favour. Clarke's breakthrough discovery of pieces of clothing from the three victims at a remote spot called Clootie Well leads her and Rebus to realise that a serial killer/vigilante may be at work – what is more, a killer who targets sex offenders, possibly via a website called Beastwatch. In another case, when they attempt to investigate the mysterious death of an MP who has fallen or was pushed from the ramparts of the Edinburgh Castle during an official dinner, they are rebuffed by Special Branch who claim jurisdiction but appear to be engaged in a cover up of the politician’s death. Rebus is rightly suspicious, not least because of the involvement of a party donor, Richard Pennen, an arms dealer who is also at the Castle dinner with the aim of securing contracts for the supposed “reconstruction” of Iraq. Rebus refuses to relinquish his pursuits and he and Clarke are suspended for refusing to shut down their investigation. Undeterred, Rebus continues, discovering that Pennen’s activities may be legal, if morally problematic. Rebus also explores whether there is some connection between the MP’s death and the murder of the criminals; and it turns out that he is right. When he identifies the culprit, he is unable to make an arrest because of the collusion between those who exercise great power and the perpetrator, who is assisted in vacating Edinburgh and escaping into the chaos of London after the bombings.

The conclusion in Naming is remarkably similar to that in Blacklist. Both Rankin and Paretsky portray a murky world where security issues or a climate of fear overrides everything else, leaving the relationship between justice, power and morality often ambiguous. At the same time, we can applaud the efforts of their tenacious protagonists who work against the odds to be, in Rebus’s words, “good copper(s).”

– Bob Douglas is a teacher and author. His second volume to That Line of Darkness: The Shadow of Dracula and the Great War (Encompass Editions, 2011), titled That Line of Darkness: Vol. II The Gothic from Lenin to bin Laden, is available now. For more information, please visit www.thatlineofdarkness.com.
Posted by Robert A. Douglas at 14:01