The Sublime and the Grotesque: Stephen Fry’s Wagner & Me

This review originally appeared in  Critics at Large

"Wagner’s music is better and greater than Hitler ever imagined."

Full disclosure: I have an abiding passion for the art of Richard Wagner. It was not always so. Like many others, I believed that his personal anti-Semitism and the Nazi appropriation of his art had sullied his work. That preconception collapsed as I researched and wrote a substantial chapter on Wagner in That Line of Darkness: The Gothic from Lenin to bin Laden, Encompass Editions, 2013. Perhaps more important was my privilege of attending performances over four nights of the complete sixteen hour Ring Cycle on four occasions, experiences that I can only describe as transportive, even transcendental. It is easy to see why I eagerly anticipated director Patrick McGrady’s documentary Wagner & Me, with the actor (Wilde, 1997), writer (Making History, 1996, an alternative history novel about the Third Reich), and television host Stephen Fry serving as our genial guide. Except for a few blemishes, it was not a disappointment. I was in fact thrilled by it. 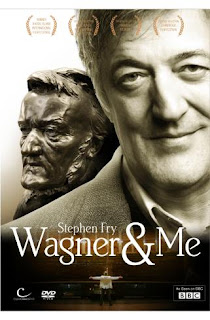 In Wagner & Me, Fry explores a topic that is more personal and his treatment is layered. First, there is his infectious enthusiasm for the musical dramas of Richard Wagner that was seeded when he was eleven years of age and heard the overture to Wagner’s Tannhauser on his father’s gramophone. The effect was liberating: “it released forces within me.” He exudes that passion from the outset of the film when he informs us that he has made his first pilgrimage to Bayreuth, the site of the annual summer festival that has been exclusively showcasing the works of Wagner since 1876. He can hardly contain his exuberance – he is even self-deprecating about it – from playing a chord from Tristan und Isolde on the piano given as a gift to Wagner to shaking the hand of Eva Wagner Pasquier, the great-granddaughter of the maestro, who, along with her sister, is one of the joint directors of the Festival. Fry experiences an aesthetic rapture when he opens the door of the temple, “the holy of holies” of the Festspeilhaus, Wagner’s no-frills opera house with its free standing timber structure, exceptional acoustics and an unimpeded view for every member of the audience. This is for Fry “Mecca and Graceland rolled up into one.” Viewers may regard this paean to Wagner as a breathless fan letter but still allow themselves to be swayed by Fry’s affable charm.

On another level, Fry is a thoughtful guide as he surveys Wagner’s life and his aesthetic philosophy. Although his early works were operas in the traditional sense, during his twelve-year exile in Switzerland where he fled from Saxony after participating in the abortive 1848 revolution, he conceived of an art form in which drama was an integral component and not subordinate to the music. As a result, Wagner became an aesthetic revolutionary committed to excellence not only in performance but in production. Fry believes and I agree that Wagner’s genius as a composer and his brilliance as a dramatist are best exemplified in his later magisterial musical dramas Tristan and the four-part epic Ring, both of which are featured prominently in the documentary. (The lovely song “Traume,” which is performed for an appreciative Fry by a chamber orchestra at the Villa Wesendonck in Zurich, was later worked into Tristan, an artwork that is steeped in avant-garde music.) Fry’s rightful emphasis on the importance of drama in Wagner does, however, underscore a shortcoming in the film. Only one line from the musical dramas featured here is subtitled. In most operas, the libretto is not vitally important; we primarily listen to the music and watch what is potentially a visual feast. In Wagner’s musical dramas, the libretto, for which Wagner wrote every line, is essential to our understanding of his art. Could subtitles have not been included here or were there copyright problems that could have been acknowledged in the final credits?


Finally, there are the troubling questions: how does one who admires Wagner’s art reconcile that with his avowed racism, and more important, has his art been irredeemably tarnished because the Nazis co-opted it for their purposes? As a Jew who lost relatives in the death camps, Fry does not shy away from investigating these tangled issues. As a result, he has a complicated relationship with Wagner. McGrady’s decision to explore that attachment by juxtaposing the sublime with the dark shadows that hang over Wagner is the best part of the film. While he was writing the gorgeous “Traume,” he was penning the virulent essay "Jewishness in Music" in which he vents a visceral reaction toward Jews. The scholar Chris Walton helpfully responds to Fry’s agitation around Wagner’s screed by pointing out that these pre-Holocaust sentiments were widely shared by his German compatriots; he might have added that garden variety anti-Semitism was accepted throughout most of Europe. Walton does astutely comment that just because Wagner may have been “a nasty little anti-Semite doesn’t mean that his music is not as supreme as it is.”

The most disturbing episode in the film occurs in Nuremberg, a mix of memorials and ruins, which was the setting for Wagner’s only comic opera The Mastersingers of Nuremburg as well as of the annual fall rallies between 1933 and 1938. Fry is joined by Joachim Kohler who wrote the book Wagner’s Hitler, the title indicating his basic premise that Wagner was deeply embedded in the Nazi movement. The juxtaposition of storm troopers hearing The Mastersingers in the afternoon and later marching in torchlight parades, sometimes even whistling tunes from it, and listening to Hitler in the evening was, according to Kohler, an expression of that close connection. It is obvious that Fry is uncomfortable with his perspective, as am I. He believes that Wagner’s art was perverted by the Nazis and that Wagner would have been too conflicted, ambiguous and anti-fascist to have embraced the movement. Fry could have also stated the obvious, that Wagner had been dead for fifty years before the Nazis even came to power. Yet he is deeply disturbed by how close Wagner’s art was to the Nazi fantasy. He concedes that for some, Hitler and the Nazis have permanently stained Wagner and his art; for others like himself, "it is something you have to face up to.”

It appears that the directors of the Bayreuth Festival are endeavoring to face up to its past. The Wagner sisters want an independent investigation of the family’s relationship with the Nazis. That historical examination will include the role of Wagner’s daughter-in-law, Winifred, who was an early supporter of Hitler and continued to revere him long after his death. Even more interesting is that the Nazi period is being addressed on the Bayreuth stage itself in the performance of Wagner’s last work, Parsifal, which is based on the Arthurian legend and the search for the Holy Grail. In this interpretation, Nazi flags will be on display. I wished that the rehearsal scene, powerfully evocative of Nazi Germany, would have included subtitles.

I have a few other relatively minor quibbles. Wagner’s soaring music heard throughout often makes it difficult to hear Fry’s voice-over narrative. Only when he speaks before the camera does the music subside. Also near the end of the film, Fry has a fascinating conversation with a Holocaust survivor whose ability to play the cello saved her life. For all her reservations about Wagner, that include his dramas, she concedes that the Nazis did not sully his music. She in turn asks him some pointed questions: why does he harbour this passion for Wagner and why is it necessary to go to Bayreuth when he could hear the music through recordings back home? Yet she encourages him to make up his own mind and wants to hear more from him after he returns. I think that this conversation would have had more dramatic impact near the beginning of the film. Her queries could have provided the arc for the film and a tighter focus rather than the time spent on a potted biography of his life even though the visual and aural tour Fry takes us on is pleasurable. Among the highlights is a visit to the Mariinsky Theatre in St. Petersburg where Wagner once conducted (to pay off his debts); there Fry attends a Russian interpretation of the Ring. Since he decided on this bio-approach, I did hope that he would linger a little longer at Neuschwanstein Castle – we see little of it – built by the eccentric Ludwig II, a palace that may be regarded as homage to the works of Richard Wagner. Ludwig, Wagner’s greatest patron, liquidated his debts and financed the Festspeilhaus. Without Ludwig there likely would not be a Bayreuth Festival. This material is important and if McGrady and Fry had pursued the arc suggested above, they could have included it, as well as explored the conflict between Wagner and Ludwig that in part stemmed from the Bavarian king’s objections to Wagner’s anti-Semitic sentiments.


Nonetheless, these caveats did not diminish my enjoyment of the film, or the complex issues explored therein. Before he excitedly attends his first Bayreuth performance at the end of the film, Fry soberly reminds us that the bust of Wagner shown near the Festspeilhaus was done by Hitler’s favourite sculptor. Yet he has come to some sort of resolution. One of the most moving moments in the film occurs during Fry’s reflections as he is about to enter the hallowed opera house. A couple of lines are worth quoting: “If you have never heard the music of Richard Wagner, I urge you to give it a try. I believe that his work is important and on the side of the angels. It is fundamentally good.” Amen. I could only add that you might introduce yourself to Wagner or dispel any preconceptions by seeing this worthwhile film.
– Bob Douglas is a teacher and author. His second volume to That Line of Darkness: The Shadow of Dracula and the Great War (Encompass Editions, 2011), titled That Line of Darkness: Vol. II The Gothic from Lenin to bin Laden, is available now. Bob will be signing copies of both volumes on Saturday, June 22 at Indigo Bookstore in Toronto (Bay and Bloor, 1 - 4 PM). For more information, please visit www.thatlineofdarkness.com.
Posted by Robert A. Douglas at 07:59