Hitler, Mein Kampf and the Jews 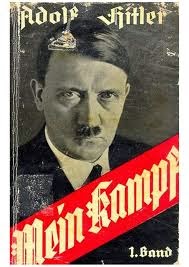 A pared down version of this selection appeared in That Line of Darkness: The Gothic from Lenin to bin Laden  (Encompass Editions, 2013) but most of it was edited out for reasons of space.

Influenced also by his avatars, Arthur de Gobineau and to a greater degree by Austin Stewart Chamberlain, Hitler set forth a Manichean view of history as a racial struggle between two abstractions or entities, mankind’s highest specimen, the Aryan and its lowest, the powerful and satanic Jew. As the pied piper of a ‘pure’ race, he fulsomely praised the odious fraud, The Protocols of the Elders of Zion, convinced by the spurious logic that anyone who denied its authenticity was proof of its veracity. If the Aryans should lose this apocalyptic struggle between heaven and hell, “a bastardized and niggerized world” would destroy all that was “humanly beautiful and sublime” and the “dark veils of an age without culture will again descend on this globe.” It is significant that Hitler attributed astonishing power to the Jews so that when he later embarked on his systematic campaign of destruction against them, he continued to foster the impression that they constituted anything but a weak hapless people who were being needlessly persecuted. Traumatized by injuries that included gassing, the humiliation of defeat and the postwar revolutionary upheaval, the aggrieved zealot fastened his all-devouring rage on traditional images of Jews as war-profiteers and international financiers, as clerks and agitators, whom he held responsible for engendering a mood of defeatism. In keeping with his frequent deployment of bacterial imagery, he warned and prophesied that in the case of a future war, “If the best men were dying at the front, the least we could do was to wipe out the vermin.”

By 1920 with Russian émigrés arriving in Munich and the German publication of the Protocols, Hitler yoked familiar resentments of Jews as bloated profiteers who machinate international finance and gaunt sinister Bolsheviks. In his mind, they were polar twins of the same menace, and developments in Russia demonstrated a dramatic breakthrough for Jews to achieve world domination. In a vivid but unoriginal passage, he melded these fears of the “devil” Jew by evoking the specter of the “blood-Jew[“s] tyranny in establishing Bolshevism “where he killed or starved about thirty million people with positively fanatical savagery, in part amid inhuman tortures, in order to give  a gang of Jewish journalists and stock exchange bandits domination over a great people.” But the Jewish rulers would not be able to maintain their control over their Empire because Jews, being an uncreative could not develop a state but only “a ferment of decomposition…ripe for collapse.” Germany has been chosen to destroy “Jewish Bolshevism,” and at the same time to provide the German people with living space, so that they as a people would not vanish or serve “others as a slave nation.” Instead of pursuing the policies of the Second Reich by extending its influence south or acquiring colonies, in unmistakable terms, Hitler revealed his intention that the new Reich would follow in the footsteps of the Teutonic Knights of the Middle Ages, by “tak[ing] up where we broke up six hundred years ago” and acquiring soil “by the sword” for the land-hungry Germanic peasants through conquering territory in the East. 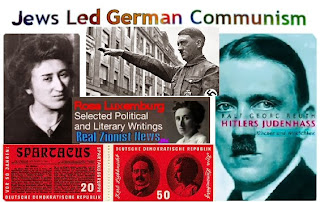 His brutal Social Darwinian view and his conviction that war revealed the ultimate truth about nations, when they were locked in an amoral struggle with the weak forced to the wall, mandated the destruction of the enemy. Bolshevik power over Russia permitted him to convince his audiences that Germany would be next. Surely the creation of a brutal, albeit short-lived, Soviet style government in Bavaria had provided sufficient evidence for this supposition. Whatever success the Bolsheviks had experienced he attributed to the power of the Jews, whom he had elevated to cosmic proportions, to the extent that they managed remarkably to be both Marxists and international capitalist financiers and the instruments that operated behind them. If this formidable foe were to be vanquished, Germans must be prepared to fight and win or they did not deserve to live, a threat that he tried to carry out in April 1945. In his apocalyptic (and presciently accurate) scenario, he averred that no diplomatic maneuvers resulting in a future treaty of Versailles with Jewish Bolshevism would occur: “There is no making pacts with Jews: there can only be the hard: either—or.” It is clear that these passages presaged a battle cry for war. The last one had been a godsend that rescued him from a miserable existence in which he parlayed his experience as a dispatch runner into medals and recognition. Having found his metier in the patriotic intoxication of war, he anticipated that the next one would help to satisfy his lust for greater prestige and power. No wonder he would compare himself to one of Wagner’s war-mongering gods. Perhaps he hoped that another war might still his perpetual restlessness in which the emotional intensity of a theatrical experience or one of his own public speaking performances offered only a temporary respite in peacetime. The future war that he fully expected and wanted Germany to fight would be like no other war; it would be one of extermination: “Germany will either be a great nation or there will be no Germany.”

The fusion of Jews and Bolshevism into a satanic international force emboldened him by the end of Mein Kampf to spell out his homicidal fantasies when he thought back to the lessons that should be learned from the recent war. “If at the beginning of the War and during the War twelve or fifteen thousands of these Hebrew corrupters of the people had been held under poison gas, as happened to hundreds of thousands of our best German workers in the field, the sacrifice of millions at the front would not have been in vain.” Whether it would have altered the course of the war was beside the point; according to Hitler, it might have saved the lives of millions of "real Germans" and avoided the revolutionary turmoil that followed because Jews had been its agitators. But the important point is that he revealed in unambiguous terms his plans for the Jews in a future war. 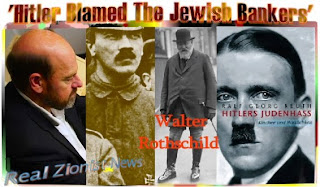 As he moved closer to achieving power, he attempted with mixed success to become more circumspect donning the persona of a unifier and statesman. The British publication Punch perceptively captured this duality in Hitler with its cartoon entitled “Jekyll and Hyde” where a sanctimonious exalted Jekyll remains in the background balanced by a bestial unbridled Hyde lunging menacingly in the foreground. (The cartoon is reproduced in Germany Possessed by H. G. Baynes, London: Jonathan Cape, 1941.) Not until 1939 when he delivered an ominous speech did he state such a bold proposition publicly. 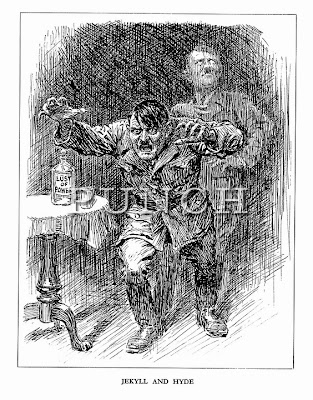 Whether he was really interested in protecting the lives of “real Germans” is problematic because from 1933 to 1945, there were few instances that Hitler demonstrated the slightest concern for flesh and blood German lives as opposed to the sufferings of the “German people” in the abstract. Even during the height of the war when allied bombs rained on German cities, according to Albert Speer, he evinced scant empathy for the casualties and the subsequent human misery. Rather he was more upset about the destruction of public buildings, especially the burned-out theatres that he demanded be rebuilt immediately. As if to demonstrate how far he was out of touch with ordinary Germans, he declaimed that “theatrical performances are needed precisely because the morale of the people must be maintained.” Germans were expendable and, as events unfolded, losing the war became secondary to him to liquidating every Jew in Europe.

Underpinning the repellent content of Mein Kampf is paranoia and a conspiratorial mindset that leaps from the pages. In its style and tone it conveys the intensity of his all-consuming hatred that he bore during the postwar years. His persistent deployment of the language of parasitology was viciously designed to dehumanize his enemies and justify his rage. Combining medieval associations and imagery drawn from modern science, he churned out chimerical accusations against the “Jewish poisoners” the “eternal bloodsucker” and a “typical parasite, a sponger who like a noxious bacillus keeps spreading as soon as a favorable medium invites him.” 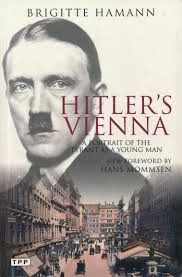 While this type of language reflected his ideological stances towards Jews during the early 1920s, he found it expedient to invent a narrative of the prewar years in Vienna to demonstrate that he metamorphosed from “a weak-kneed cosmopolitan to an anti-Semite,” but recent scholarship (Brigitte Hamann, Hitler’s Vienna: A Dictator’s Apprenticeship, translated by Thomas Thornton, New York: Oxford University Press, 1999) has challenged this view. True, he retrospectively described his experience of Jews during the five years he spent in Vienna as a visceral aversion, experiencing nausea “from the smell of these caftan-wearers [who were] “a maggot in a rotting body,” and a “spiritual pestilence, worse than the Black Death.” However, his personal relationship with Jews during that time was generally positive. When he spent time in a male shelter with educated Jews, he dismissed the then-popular blood libel charge against a particular Jew calling it “absolute nonsense, a groundless slander.” He even denied that Jewish capitalists were usurers, and asserted that the major share of capital was in Christian hands. He depended upon Jews to buy his mediocre postcard watercolours, and he was unstinting in his praise of the Jewish born Gustave Mahler’s interpretations of his beloved Wagner. In no discernible way did Hitler exhibit the seething monomaniacal fixation on the Jews that appeared in the Viennese days’ account of his memoirs.