This short selection is a counterpoint to the evidence that the propaganda organs under Stalin were able to persuade ordinary people that Stalin was making their life better.

Despite the powerful grip of the Potemkin village fantasy, it became increasingly difficult for workers and peasants to explain the failures when Stalin announced in 1935 that socialism had been achieved. When the glorious future utopia clashed with the ugly and debilitating material and spiritual present, the hopes and the illusions ceded to cynicism and despair. His failure to fulfill material promises for the majority of workers and peasants guaranteed that large numbers of them would not embrace him as a benevolent father figure, or the system that he embodied. Material deprivation fuelled the impulse on the part of workers to express their hostility toward the system and even to Stalin himself. When he delivered his often quoted famous but surreal motto that “Life has become better, life has become merrier,” the myth of a happy people performing great feats and adoring their benevolent leader, he could never have suspected that this slogan would become a source of mockery. Workers appropriated the slogan to scoff at official claims that, “life was not getting better but worse it was [becoming] more expensive every day.” In a letter in 1938, one foreman acknowledged that when workers quoted that phrase, it was “mechanical, made from habit and pumped up by social organizations.”

Discontent expressed in political speeches and the call for strikes reached its peak after the labour decree of 1940. The secret police, the NKVD, reported on leaflets titled, “Down with the government of oppression, poverty and prisons.” Although these reports attempted to attribute the agitation to counter revolutionaries such as Trotskyists, it is clear that the anger expressed dissatisfaction with the regime, and that the country was regressing to capitalism, fascism and even a “second serfdom.” In a working class town, Nadezhda Mandelstam heard Stalin unflatteringly referred to as “the pockmarked fellow,” but in a small town they felt safe expressing negative comments because they knew the identity of the informers. Because many had become so alienated from the regime that they were prone to listen to rumours of imprisoned workers being tortured and began to speak of a “second revolution.” 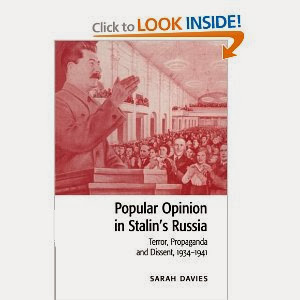 It is ironical that Marxism, which originally had been a protest against working class exploitation, morphed under Stalin into a program of centralized, frenetic and driven industrialism that, with labour firings and swift expulsion to concentration camps, involved exploitation by its own dictatorship. Collectivization and the famine had completely soured the peasantry on Stalin as Peasant Enemy No. 1. If he had any illusions that they regarded him as the “good Tsar,” according to Sarah Davies (Popular Opinion in Stalin's Russia: Terror, Propaganda and Dissent 1934-1941 Cambridge University Press, 1997), the evidence by the end of the 1930s suggests the contrary.people criticized the poor supply of food and consumer goods, that many workers were hostile to their Stakhanovist colleagues (those who exceeded the production norms). On the famine, he had “screwed things up,” and when Kirov, the popular chief of Leningrad, was murdered in 1934, a large swathe of opinion regretted that Stalin had not been the target. Nonetheless, millions of people learned to adapt to the "Bolshevik speak" and could feel moments of pride toward the Soviet leader as they moved freely between the two worlds of official culture and a "shadow culture."

In the late 1930s with the potential for war looming as a terrible reality, rumours undercut those fears with the suggestion that a war might be welcome if it could assure the overthrow of the current regime. It is tempting to speculate that given the anecdotal impressions of hostility among the Russian peasantry and the much more documented evidence of revulsion among non-Russians in the Soviet Union, had the insane racism of Hitler not dictated policy, then the Germans would have militarily defeated Stalin’s regime. Still, the trauma of the German invasion in June 1941 notwithstanding, it saved the Soviet regime from having to confront a major embarrassment of having to deal with the disaffection of workers, in whose name they ruled, at least until after the war.