In the following,  I compare the journalist Henry Mayhew's mid-nineteenth century anthropological account of  the costermongers or food hawkers to Bram Stoker's description of his vampires in Dracula. The selection was not included in That Line of Darkness: The Shadow of Dracula and the Great War (Encompass Editions, 2012) for reasons of space. The concluding paragraph was added for this piece. 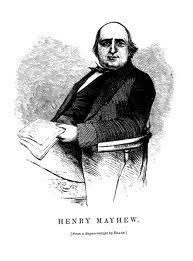 In 1851 Henry Mayhew, journalist, satirist and occasional actor published his compilation of articles gathered during the 1840s for his social survey report that he titled London Labour and the London Poor. Motivated by yet another cholera epidemic, Mayhew accented the parasitical nature of the street people. Based upon open-ended questionnaires, his report combined a genuine sympathy for the outcast poor and vivid degenerationist language. When he compared the street folk of London to “wandering tribes” of Africa, he employed a proto-Lombrosian emphasis on physiognomy. He distinguished the "broad lozenge–shaped faces” and “organs subservient to sensation and the animal faculties,” of the nomad with the civilized man’s oval-shaped head signifying those who “depend mainly on their knowledge…for the necessities and comforts of life.” The wanderer in contrast to the civilized man was characterized by his “repugnance to regular and continuous work…his extraordinary powers of enduring privation—his comparative insensibility to pain…[his] disregard of female honour—[his] love of cruelty.”

These descriptive passages, albeit with less scientific cachet, carried the same stigma that Lombroso later produced when he used the epithets, born criminals savages and lower races to categorize certain people. As if a traveler in an exotic, unknown land, Mayhew compared the costermongers or food hawkers, who served local street markets, to a raucous foreign tribe of bushmen in Africa with their own esoteric slang, their penchant for fighting, drinking and gambling, and insensitivity to their women. He dismissed “the vagrant beggars and pilferers of the country” as feckless with few moral restraints who therefore were dangerous, “degraded and vicious.” He wondered whether their nomadic lifestyle caused the blood to circulate to the surface of the body strengthening the muscles at the expense of the mind. He compared them to destitute vagabonds who did “nothing whatsoever for their living, but [move] from place to place preying upon the earnings of the more industrious portion of the community.” There is a Gothic element implicit in Mayhew’s account of the parasitical nature of the costermongers who fed upon the ‘industrious that is echoed almost fifty years later by Bram Stoker in his portrayal of vampires who must consume the blood of human beings to perpetuate their undead existence. Just as the costermongers’ motivation in life was to satisfy basic physical needs, so Dracula’s is to feed upon others so that he can exist and replicate. Given the sheer physicality of this peripatetic crew, Mayhew warned that society might be in danger of reducing human value to its most corporeal attributes: 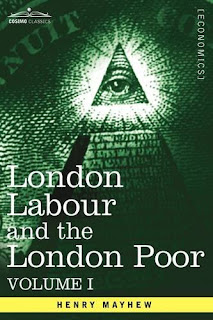 Everything is sacrificed—as, indeed, under the circumstances it must be—in the struggle to
live—aye and to live merely. Mind, heart, and soul, are all absorbed in the belly. The rudest
form of animal life, physiologists tell us, is simply a locomotive stomach. Verily, it would
appear if our social state had a tendency to make the highest animal sink into the lowest.

Consider the following passage in which the distinguished professor, the Dutch Van Helsing, the acknowledged leader of the vampire hunters, warns his followers in his broken English that Dracula’s physical strength poses acute dangers for society (like the costermongers) because of the absence of any moral dimension:

The nosferatu do not die like the bee when he sting [sic] once. He is only stronger; and being
stronger, have yet more power to work evil. This vampire is [sic] amongst us is of himself so
strong in person as twenty men; he is of cunning more than mortal, for his cunning to be the
growth of ages.
The Gothic tone continues in Mayhew’s account of a band of scavengers burrowed into the subterranean sewage system. As they sifted through items of value, they contended with the dangers of drowning as tides flooded underground cul-de-sacs, and of being buried in collapsed brickwork. Further, in “this foul labyrinth…beset by myriads of enormous rats, and slaying thousands of them in the struggle for life, till at length the swarms of savage things overpowered them, and in a few days afterwards their skeletons were discovered picked to the very bones.” Although expressed in a Gothic idiom, his chronicle about life in the bowels of the city presents a slice of documented realism.

Concurrently Mayhew, who considered himself a reformer, recognized that slum conditions could produce capable but desperate individuals who would have benefited from education and healthy amusements if those had been provided by their “culpable…betters.” He was referring to the vagrants who scavenged on the streets and the little watercress girls and desperate men, who frantically scratched out an existence on the waterfront, willing to do the scut work (the dirtiest, most disagreeable) necessary to survive.  He hoped to impress upon his readers that these people too were “of English society, though separate from it, related to the middle class but a race apart from it, fellow inhabitants of the same city but members of a different tribe.” Mayhew continued in the tradition that conditions were reversible even when he was unable to offer program alternatives.

Mayhew's pioneering work in documenting the lives of the poorest in society continues as reporters and filmmakers expose the conditions under which street people endured  by living among them, sometimes with tragic results. The online journal, Gawker, recently reported that a young, aspiring filmmaker in Newcastle UK froze to death when overnight temperatures dipped to below zero Celsius. He had hoped that his film on street people would launch his career.
Posted by Robert A. Douglas at 11:01