The British Declare War on Germany


The following selection was excised from That Line of Darkness: The Shadow of Dracula and the Great War (Encompass Editions, 2011) for reasons of space.

That Britain declared war at all was not a foregone conclusion until August 4th. Unknown to the Foreign Office, momentous decisions were transpiring behind closed doors in Vienna and Berlin that would draw Britain into the vortex of war. Austria, who had been increasingly roiled by Serbian nationalism, started drafting a memorandum to destroy Serbia two weeks before the murder of Archduke Ferdinand of Austria and his wife Sophie at Sarajevo on June 28. The assassination was a fortuitous occasion for Austria because it now possessed a pretext for the invasion of Serbia that it had craved and, equally important, the Austrian high military command received a blank check from Kaiser Wilhelm, meaning that Germany would unconditionally support Austria in whatever measures it took to punish Serbia.


Despite his blustering rhetoric, Wilhelm oscillated between belligerence and caution, urging Vienna to content itself with occupying Belgrade after it declared war on Serbia, and he remained confident that any war would be confined to the Balkans and would not involve the other great powers. In his correspondence with his cousin, Nicholas ΙΙ, he argued that it was in both German and Russian interests to have the assassins of a ruling family punished. Unfortunately, Wilhelm grievously underestimated the bellicosity of his military leaders, particularly his Chief of Staff, General von Moltke, who temporarily shunted the increasingly erratic Kaiser into the background. Convinced that Germany must fight a war to remain a great power, Moltke believed that it should be sooner rather than later to avoid encirclement and the grim scenario of fighting a simultaneous two-front war on their Eastern and Western flanks. Even though Russia had no intention of attacking Germany, Moltke was convinced that a preventive war with Russia was necessary in order to counter the threat that it potentially posed to Germany’s continental domination. When Russia mobilized on July 31st to support fellow Slavs in Serbia, the Prussian military officer caste and their supporters in the Foreign Office, seized the serendipitous opportunity to exploit because they already planned to go to war with Russia before the Tsar’s forces had mobilized. Germany eagerly used Russian mobilization to obtain widespread support of its own people to fight a “defensive war.” The civilian authorities duly exploited Russo phobia and the fear of invasion, particularly among the working classes, the people most resistant to war, to declare war on the Russian “Huns.” Convenient circumstances in the Balkans and the Russian response provided both the German and Austrian military high commands with the excuse they needed to fight their respective wars, although the Austrians, being the junior partner in the alliance, reluctantly subordinated their desire to crush Serbia by folding much of their strength into fighting the Russians on a south-eastern front. 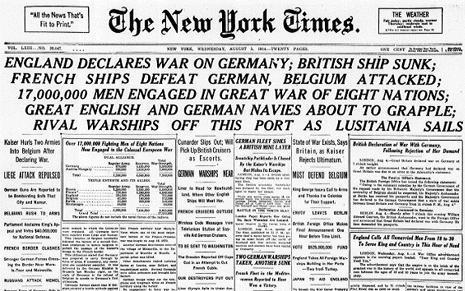 Whether a major continental war could have been avoided and who bears most of the responsibility for initiating the war continues to preoccupy historians. Contrary to a previous historical orthodoxy that the world blindly stumbled by accident into a global war in which statesmen were overborne by events, most historians now contend that the belligerent countries and its major military, political or diplomatic actors now bear the responsibility. But they were motivated by fear rather than national aggrandizement. David Fromkin (Europe’s Last Summer: Who Started the Great War in 1914? New York: Alfred A. Knopf, 2004) targets the German military elite, and singles out Moltke but also contends that a large-scale European war might have been avoided had Russia made “common cause with Austria against regicides and terrorists…[because] it would have deprived Germany’s military leaders of the conditions and pretexts necessary to initiate their proposed war against Russia and France.”  David Stevenson (Cataclysm: The First World War as Political Tragedy New York: Basic Books, 2004) offers a more nuanced perspective. He agrees that Germany was motivated by fear to avoid the loss of great-power status and that Germany and Austria bear much of the responsibility, but he also assigns blame to the Allies because they took calculated risks and were willing to go to war because they feared German ambitions.

Once the Germans mobilized, the British government faced a difficult choice. The left-leaning liberal humanitarians in H. H. Asquith’s cabinet believed that the country should not go to war unless attacked, and threatened to resign if Britain went to war for any other reason. But there would be the moral opprobrium that Britain would suffer if it did not confront German militarism. Undeniably, British governments since the turn of the century had become increasingly alarmed by the German naval build-up. In 1904, it was motivated to shift its long standing historical rivalry with France into a rapprochement but even Sir Edward Grey, the Foreign Secretary, argued that the diplomatic realignment of the Anglo-French Entente was not a contractual obligation. Yet he maintained that the Treaty of London of 1839, which guaranteed the neutrality of Belgium, was legally binding. Whether the Belgium question was a legal matter, a pretext in which to mobilize public support or save the Liberal government is still debated by historians.

Grey was more persuasive when he argued that if Belgium were overrun and absorbed into Germany, its ports would fall under hostile control and jeopardize British security given that the Belgium coast faced London and Germany could exclude Britain from markets in Continental Europe. If Germany defeated France, which was allied to Russia through a treaty, it would establish a dangerous hegemony over Continental Europe and destroy the balance of the power, maintain control over the Channel ports and further erode British security and freedom by using their newly required resources to excel Britain’s battle-fleet and take command of the sea. Grey persuasively encapsulated these sentiments in a masterful speech warmly received in the House of Commons on August 3rd: “If we did not stand by France and stand up for Belgium against this aggression, we should be isolated, discredited and hated; and there would be before us nothing but a miserable and ignoble future.” In the end, strategic, moral and political reasons dictated the governing Liberal Party’s decision to declare war when Germany failed to respond to its ultimatum to respect the neutrality of Belgium and withdraw its armed forces from it.