The Retreat from Domesticity in Late Victorian Britain

This piece was originally to be part of the chapter on manliness  in That Line of Darkness: The Shadow of Dracula and the Great War Encompass Editions, 2012 but was  omitted  for reasons of space.


A shift in the wider social and imperial matrix contributed to a new construction of manliness in late Victorian England. Trends influencing the transformation of what it meant to be a ‘man’ included the middle class man’s rejection of domesticity, the backlash against feminism, and the adventurous opportunities provided by the empire that were reinforced by the institutions of the public school, the male club and the Boy Scouts. For most of the century, men enjoyed the power, material comforts and emotional satisfactions of being the paterfamilias. Indeed, a man’s masculine identity was tied not merely to his public or political role, but also to his place in the home where he could be fully human as he engaged in tending the hearth and his children. But after 1870 an increasing number of middle-class males questioned whether these latter dividends had made them less robust and perhaps even a little effete. If the home was his sanctuary, with his wife firmly ensconced and exalted in the domestic sphere, it could also be stifling, unfulfilling and dull as he submitted to the “tyranny of the five-o’clock tea.” 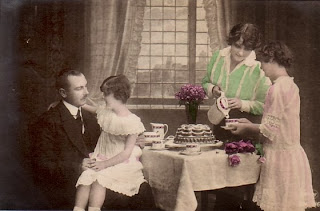 Domesticity for some men became dissociated from manliness and assumed a feminized character. The generation that grew up in the last quarter of the century increasingly disparaged everything feminine including the tender emotions.  Many men refused or postponed marriage because they considered it a straitjacket. Those, who outgrew the torrid, romantic, often unconsummated, relationships with other young men of their youth, often opted for celibacy and bachelorhood with its pleasures of intense homosocial contacts. Some gravitated to an emotional bonding with a younger man that was erotic in character; an increasing number chose same-sex relationships. For those that relented and did marry, family gatherings were secondary to the man’s retreat to his study or the ‘the smoking room’; home became a place to visit. After marriage, many continued to live a bachelor lifestyle, spending considerable time at their clubs enjoying the camaraderie of an all-male haven while denying their wives companionship and financial means. As fathers, they became more formal figures with stiff upper lips where “sentiment and self-examination were dismissed as “morbid”; to reveal inner pain, whether through tears or depression was a sign of weakness.”  At the same time, on occasion when he embodied “Father Christmas,” the generally remote dad could afford to be generous and indulgent and the fount of material largess. Despite these forays, marriage and domesticity, that had been the destiny of early Victorian men, became one option among several alternatives for men in the last third of the century. 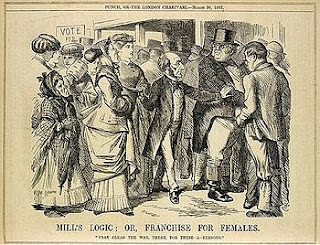 The retreat from domesticity was in part a response, even a backlash, to the feminist movement and the New Woman. When young women decided to leave home to live with another woman, to establish an independent life, and to appear in public and private without a male escort, they posed a threat to patriarchy and its power of protection. By challenging the almost inviolable concept of female intellectual inequality as she expanded her educational and career options and sought the vote, a woman demonstrated little need of male protection. The assertive zealousness of suffragette women altered the reassuring stereotype of the deferential gentlewoman. Men’s display of chivalry toward women was premised upon their fragility. But the existence of a growing articulate group of feminists, who had pressured the Gladstone government into repealing the Contagious Diseases Acts, and who were mounting strong and successful assaults on the marriage, divorce and property laws, was stunning evidence of their strength. Combined with new economic realities that resulted in financially independent professional women engaged in teaching, nursing, medicine and journalism, it is not surprising that this newly-exercised reservoir of energy in women not only diminished the appeal of safe and perhaps threatening domesticity for men, but also unleashed a culture of misogyny that expressed itself in the clubs where the man’s man could keep female society at arm’s length. Perhaps more significant in the male retreat from domesticity (and patriarchy as embodied by overbearing fathers) were the economic and lifestyle opportunities provided by late nineteenth-century imperialism. Part of the inspiration for the interest in the empire was the reading material of boys and young men that fired their imagination. 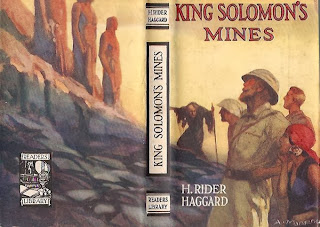 The period between 1870 and 1914 witnessed the appearance of hundreds of boys’ adventure stories that exalted Britain’s Empire builders and presented a simplistic, imperial worldview when it was at the apogee of its glory. Inspired by tales that exalted the Victorian pieties of courage, self-sacrifice, duty and above all honour, many restless spirits seized the opportunity to escape home by going overseas to test their manhood. In an open frontier environment, they acquired opportunities to expend their testosterone rush in serving the Empire and seeking their fortune at a time when the imperial drumbeat dominated public consciousness. They may not have understood the complexities of war and empire, but they "knew the Empire was theirs and they were going to support it." Besides providing men with something heroic and bracingly masculine, the adventure genre, that included the works of Robert Louis Stevenson and Rider Haggard, fed the fantasy that by serving the Empire they would be unconstrained by feminine sensibilities or burdensome emotional ties. As Haggard’s hunter-hero Allan Quatermain reassures his readers in King Solomon’s Mines, “there is not a petticoat in the whole history.” The men that served the Empire believed that if Britain’s destiny was to be fulfilled, it had to be quintessentially a masculine affair without the company of white women.