This selection was originally to be included in my discussion of J. M Barrie and Peter Pan in That Line of Darkness: The Shadow of Dracula and the Great War (Encompass Editions, 2011) but was excluded for reasons of space.

Barrie’s celebrated evocation of Edwardian childhood, Peter Pan, completely overshadows his underwhelming play Der Tag. Written without passion but with a sense of duty once war had been declared, this one-act morality play is basically a dialogue between the German Emperor and the Spirit of Culture (“a noble figure in white robes”) in which the latter attempts to dissuade the former from provoking a war. When she exits, the chastened Emperor tears up the declaration of war and falls into a dream in which Reims is bombarded and the centers of learning are destroyed. But this was the reality: the dream was his noble refusal to go to war. Culture re-enters and rebukes him for his crime reminding him that England had “grown degenerate, but you have made her great again.” She hands him a dagger and leaves. The curtain falls leaving the Emperor alone in the shadows.

Clearly Barrie’s intention was to critique pre-war Edwardian England’s purported decadence as much as it was to impugn the Kaiser for his decision to go to war.  At one point his Chancellor attempts to persuade him that the time is ripe to go to war because England is in no position to wage war because she has been weakened by: “her wild women let loose, her colonies ready to turn against her, Ireland aflame, her paltry British army sulking with the civic powers.” The wild women clearly refer to militant suffragettes who by 1911 resorted to smashing of windows with hammers and rocks, dropped acid in mailboxes and slashed paintings in art galleries, notably the Rokeby Venus at the National Gallery in London. Although restored, a careful viewer can spot where the original damage occurred. and conducting a campaign of arson, and the implication of Barrie’s polemic was that the authorities have not treated this and the Irish problem with sufficient force. Indeed, in 1917 a Member of Parliament did blame the outbreak of war on suffragette violence arguing that “it helped the Germans to believe that a country in which educated women perpetuated outrages on churches and public property was not in a position to wage war.” The allegation was absurd, but he might have been on more solid footing had he referred to the Irish crisis. 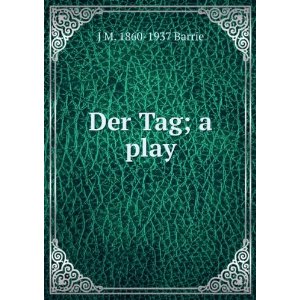 Through the tense days of July 1914 when Europe was moving inexorably toward war, the British cabinet was almost exclusively preoccupied with the threat of Irish Civil War after the Asquith Government had proposed an Irish Home Rule Bill, provoking armed resistance from the Scots Presbyterians in Ulster. If the government had been required to send troops to Ireland, the belief of the German government that Britain might have remained neutral in a continental war was not beyond the realm of possibility. At any rate, the Emperor in Barrie’s play agrees that “Britain has grown dull and sluggish: a belly of a land, she lies overfed…and timid too—without red blood in her, but in its stead a thick yellowish fluid….Britain’s part in the world’s making is done: I was her epitaph.” The play received a poor reception but it did distinguish itself from other polemical productions in that he portrayed the Kaiser as a divided troubled man rather than a bloodthirsty tyrant. It is also tempting to regard his portrait of pre-war England as a macrocosm for his unflattering view of British manhood as epitomized by Mr. Darling from Peter Pan.
Posted by Robert A. Douglas at 10:37