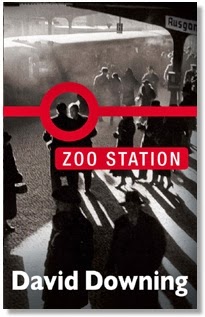 This review originally appeared in Critics at Large

Novelist and historian, David Downing, offers a powerful evocation of Berlin from 1939 to 1948 in six engrossing novels (each title the name of a continental train station) from the last year of peace before the outbreak of war to when the city became a flashpoint for the Cold War. Zoo Station, (Soho Crime, 2007) introduces John Russell, a British citizen, who’s been living and working in Berlin for fifteen years as a freelance journalist. His life as a foreigner with strong German connections presents personal dilemmas. His son, Paul, by his German ex-wife (who went on to marry a Nazi), is an active member of the Hitler Youth, and his lover, Effi Koenen, is a talented young actress making a comfortable living appearing in state-sanctioned plays and films under the auspices of Joseph Goebbels which serve as a cover for her anti-Nazi beliefs.

Another conundrum that Russell faces is how to respond to Soviet overtures. While in Danzig (today’s Gdansk, Poland), Russell is approached by a mysterious Soviet agent, Shchepkin, who asks if Russell would be willing to write some pro-Nazi feature stories for the leading Soviet newspaper, Pravda since the Soviet leadership is interested in pursuing a non-aggression pact with the Führer, and these articles could help to prepare the Soviet citizenry for such an about-face alliance. This proposal is just one of the moral quandaries facing Russell given his awareness of the kindertransport of Jewish children, and the intimidation of Jewish citizens, the pillaging of their homes and the fatal beatings of their relatives in the Sachsenhausen Concentration Camp—as a journalist he visits the camp to briefly interview a badly beaten inmate—by Nazi thugs. Conflicted with being a well-paid propagandist for the Soviets—he was once a communist, and though he still retains his vision of a humane and more equitable world, he has long shed his illusions about the capacity of the Soviet Union to deliver it—and what he sees around him in Germany, Russell questions how he can maintain his integrity, keep his family safe from harm and provide humanitarian assistance to Jewish friends. His decision to work for the Soviets is a Faustian bargain that unfolds throughout the subsequent novels. A journalist, whose work can provide the cover for a spook, and his linguistic skills—he is fluent in German and Russian—render Russell an attractive recruiting target for the different national spy agencies. His response to these myriad pressures, that tests his courage, survival skills and his humanity, is a thick thread woven throughout the series.


But these novels are more than espionage thrillers. One of Downing’s strengths is that he enlivens the narratives with rich atmospherics that detail how the Nazi regime affected the rhythms of daily life, the chaos following its collapse and the shifting alliances as geopolitical realities change after the war. A subplot in Zoo Station illustrates the dangers that awaited foreign journalists working in the belly of Hitler’s beast who attempted to breach the regime’s secrets. An American, Tyler McKinley, is a journalist researching an exposé of the Nazis' plans to euthanize mentally slow children, who dies in a murder covered up as a suicide; Russell acquires the documents for the story and the lead to a critical letter proving the allegations.


In Silesian Station (2008) Russell has returned from a trip to America where he obtained citizenship and an American passport. In return, the Intelligence Department requests that he, as a reporter, supply it with any firsthand knowledge concerning Germany's war plans. Upon his return to Germany, he discovers that Effi has been imprisoned by the Gestapo for disrespecting the Führer. To secure her release, Russell must agree to spy for the Germans and obtain information about Soviet movements in the war. Russell agrees, but when he meets with Russian officials they offer a counter-proposal: supply false information to the Germans and they would help him, Effi, and his son safely escape to a neutral country should the need arise. The reader soon realizes that any favours the Soviets offer will come with a price. Like Zoo Station, there are other powerful storylines—the search for a missing Jewish girl and the activities of an anti-Nazi resistance group that attempts to assist Jews in emigrating from Germany—that provide vivid period detail.

In Stettin Station (2009) the time is the late fall 1941 and Hitler’s plans to conquer Europe seem to have fallen into place. As tensions escalate between Japan and America and war seems inevitable between America and Germany, Russell knows he will be expelled or worse but his primary worry is the fate of his loved ones. Effi is becoming disenchanted with her role in Goebbels’ propaganda machine, while his son Paul is increasingly being indoctrinated by the Hitler youth movement. While acting as a contact between the Abwehr, the German Military Intelligence, and American intelligence, Russell is sent by Admiral Canaris, head of the Abwehr, on a mission to Prague with the promise of a reward of safe passage to Switzerland, and subsequent frequent visits from Effi. The mission fails and almost costs him his life in large part because of the murderous conflict between the Abwehr and the Gestapo. As a journalist, Russell uncovers evidence of American corporate complicity through their European subsidiaries in bolstering the Nazi war machine, including the sale of a massive amount of Zyklon B gas, and that the Nazis are beginning to carry out their Final Solution with the forcible expulsion of Berlin’s Jews to the East. For Effi a bad situation is becoming worse with increasing government surveillance and official violence. 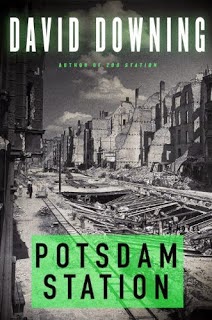 In Potsdam Station (2010) Russell reluctantly left Effi and Paul and has been away from Berlin for three years. During that time, Paul has hardened into a battle-scarred German soldier of eighteen, and the once-glamorous Effi has become weathered by the danger of sheltering a Jewish orphan and by being an underground operative for a group that hides the city’s remaining Jews. While living in Moscow during the spring of 1945, Russell angles for a way to get back into beleaguered Berlin, where Effi is still trapped, before the Reich falls and the Red Army starts exacting its revenge on the surviving populace—starting with the women. The Soviets agree but only on condition that he guide an expedition to Berlin on a secret hunt for documents from the German atomic research program. This preposterous scheme is made even riskier by Russell’s suspicion that his Russian allies will dispose of him after he helps them find the top-secret documents. That he manages to pull off this feat and survive has its price: if Russell ever attempts to jettison his spying for the Soviets, he will be exposed to the Americans who would likely consider him as a traitor.

Lehrter Station (2012) is set in the upheaval of post-war Berlin where Russell has to navigate through the treacherous terrain of both the Soviet and American security services as both insist that he spy for them against the other. He is rightly apprehensive of the zealous Stalinists who are intent on eliminating any agent who is not a true believer, and he is alerted to the danger posed by former Russian POWs who resort to violent crime rather than be repatriated to the Soviet Union. Russell also has serious misgivings about American security officials who have no qualms about co-opting ex-Nazi killers if they can assist them in smuggling out certain Germans from the Soviet zone. Some of these former Nazis even attempt to establish their bona fides with the Americans and avoid recrimination by posing as Jews. It is in this novel that Russell attempts to square the need to resort to violence while remaining a decent human being. As a veteran of the Great War, he has no problem handling a gun. 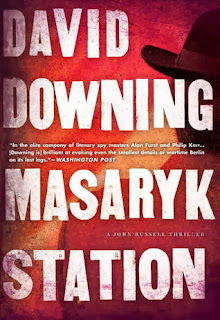 The series concludes with Masaryk Station (2013); three years have passed and tension between the Soviets and the Western powers is stoking up. The former tighten their grip on Czechoslovakia and lose Yugoslavia to the renegade Marshal Tito. But the cockpit of the novel is a bombed-out Berlin where Americans and Soviets are attempting to introduce currency reform as a means to control the German economy. The Soviets apply pressure on the Western powers to vacate Berlin and their zone by cutting off rail, road and water transport between the city and the Western zones—the famous Berlin blockade. This is the backdrop against which Germans must contend with foreign powers that will determine their future.

On the micro level, John and Effie have married and have adopted the young orphan girl Rosa. Effie, acknowledged for her thespian skills, is under pressure to act in Soviet propaganda films and the Russians are not above using Rosa as a bargaining tool. Meantime, Russell is a double agent working for the Stalinist NKVD which is pressuring him to give it names of operatives, not just former Nazis, now working for the Americans. He is also an agent and translator for the CIA which dispatches him to Trieste and Prague to interrogate refugees who include not only Jews seeking a way to Palestine, but also a motley crew of ex-Nazis, Russian defectors and Croatian fascists, who constitute the “Ratline” that is sponsored by the Catholic Church to assist those who need to escape either potential assassins or judicial proceedings. As a journalist working on this story, Russell hopes to write an exposé that might embarrass the Americans willing to embrace any war criminal who becomes a CIA collaborator. Russell’s work carries danger for those whom he interviews, for himself and for the innocent civilians of collateral damage, something he deeply regrets. In this murky terrain of an emerging Cold War, Downing is not the first espionage writer to suggest that realpolitik has eclipsed morality.

Masaryk Station opens with what is a prologue in everything but name. An unnamed high-ranking official is unknowingly filmed murdering a young girl and raping her sister. Although in retrospect the reader becomes aware that hints have been dropped about how this chilling scene is related to the central narrative, it is not until about two hundred pages into the novel that the picture comes into a sharper focus. While serving as translator for a CIA interview of a Russian defector, Russell hears about this film and the identity of the perpetrator. He instantly realizes that if made public this revelation could have major repercussions. He decides not to translate this explosive information but to privately interview the young man later. A plan begins to take shape about how he and, as it turns out, his weary and ill controller, Shchepkin, could finally escape the clutches of the Soviet security apparatus. But they must retrieve the film and use it to blackmail their way to freedom. Since we know this is the last novel, his plan could either lead to his death or to his liberation. And that I will not reveal. But I can say that this series is absorbing and informative and best read in chronological order.
Posted by Robert A. Douglas at 13:31