The following piece was not included in That Line of Darkness: The Gothic from Lenin to bin Laden (Encompass Editions, 2013) for reasons of space. It should be noted that it was much easier to acquire images for this piece that supported collectivization than those who opposed it. Hence most of the images will serve as counterpoint to the ideas presented.

Faced with the superior fire power of state-sponsored terror by outside invaders who confiscated their grain and closed their churches, peasants fought back with their own insurgency. Their resistance was not motivated by class conflict (as the Soviets perceived it) but as acts of desperation in a civil war against those that sought to destroy not only their way of life, but also their very existence. It led to an intra-village conflict because it was not only directed toward the shock troops of collectivization, but also with specific venom against local village activists who had broken ranks. The portrayal of “kulak terrorists” in newspapers as creatures who stalked their victims with a sawed-off shotgun was not entirely misplaced. Intimidation, murder and arson, the latter known as the “Red Rooster,” constituted the main weapons against the “bloodsuckers” that were destroying them. A letter to a local activist, threatening to kill him “like a cockroach” was designed to deter anyone who collaborated with the authorities. In 1930, more than 1100 people mostly peasants who were assisting in collectivization were murdered. Ultimately it proved counterproductive because it only served to escalate and to justify the state violence towards them.
Among the peasantry, this paroxysm of terror inspired apocalyptic fears stemming from memories of their brutal past. The end of the world was near and the Soviet State, with its collective farms and its collectivizers, was the Antichrist harbinger of Armageddon and the Second Coming of Christ. This apocalyptic tradition had existed among the peasantry at least since the Revolution and the Civil War, and was fuelled by uncertainty and anxiety, oppression and the breakdown of social order. Even during the relatively benign NEP (New Economic Policy) years of the twenties, when a quasi-market economy was allowed, there was never peace between the peasantry and the state; it was more like a truce that both sides knew would end one day. The intense hostility between anti-religious activists, who consisted of former Red Army soldiers and unemployed workers who fled to the countryside in the twenties, and the peasantry traditionalists, had never been resolved. Peasants perceived the former as an alien culture of atheists and hooligans, in part because they challenged the village hierarchy. This conflict was a harbinger of what would occur in 1928. 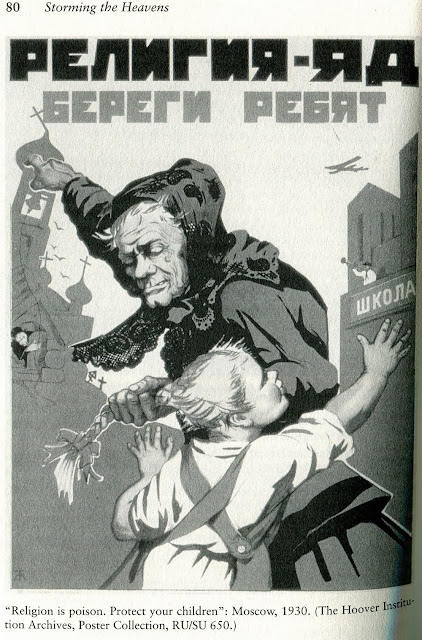 The threat to their peasant culture contributed to the growing popularity of Protestant sects like the Baptists who gave expression to apocalyptic fears with their stress on hellfire and brimstone and the promise of the Second Coming of Christ. The all-out assault on their traditions by Communist officials would have reminded the peasantry of the terrible days of War Communism. But among the elders it would have stirred the even more distant memories of serfdom with its manorial estates and the violent exploitation by lords. If collectives were not an exact replication of the old serfdom, they could be perceived as a contemporary symbol of evil and injustice that had to be resisted.

The struggle took on the appearance of an eschatological battle between the life principle and the forces of death. Consequently, rumours circulated that if peasants joined a collective farm, they would be stamped literally on the forehead with the mark of the Antichrist to identify them for damnation at the Second Coming, or they would be massacred in a pogrom. Ironically, the symbols of modernism evoked for the besieged peasantry ominous even Gothic associations, which the Stalinists regarded as detritus from a benighted past that they vowed to expunge. When the first tractors appeared in the Ukrainian countryside, there were angry demonstrations because people interpreted the trademark initials as “Satan is ruining the world. Don’t join the kolkhoz” (collective).  In the tradition of apocalyptic imagery, there were rumours that either Whites or a foreign band, one of the four horsemen, would invade to either slaughter those in collective farms or conscript them for military service. Their only hope of salvation was to leave the collective farm.

The apocalypse, with its prophetic warnings and violent images, was not only a prism through which the peasantry could understand the cataclysm of collectivization, but it also inspired them to resist the Soviet Antichrist and its agents. The spectre of atavistic pogroms surfaced because of the resurgence of a primeval and undisguised anti-Semitism. Believers called Communist supporters Jews because Communists furthered Jewish interests. It was not uncommon, especially in the Ukraine, for priests to deliver hateful sermons toward the Jews. To blame current difficulties on the Jews was a reincarnation of the stance of tsarist officials who used Jews as scapegoats and then stood back as Cossack solders visited pogroms upon them.


The most widely reported, and from the state’s perspective, the most irrational, self-destructive form of insanity was the slaughter of livestock, an action that could only have been inspired by counter-revolutionary agents such as kulaks and priests. The massive fifty percent decline of livestock from 1929 to the famine of 1933 administered a near-fatal blow to the collective farm system. The increased tempo of arrests, executions and deportations failed to halt what one historian has labelled “peasant luddism.” Bitter peasants would kill or sell their livestock, destroy their beehives, orchards and machines, and burn their property and drink their home-brewed vodka before they would turn it over to a collective farm.

There were other forms of resistance. Peasants cut back on their sown acreage, the grain they marketed and converted their grain to home-brew. Some ten million people, mostly young single males, as an act of resistance, abandoned their status as peasants and bolted to the cities and industrial centers leaving their farms forever. Those who remained banded together and resisted the designation kulaks in effect repudiating both the class analysis of local officials and Communists in Moscow and the attempts by the party to fan class war. Villagers denied the social stratification of kulaks and poor peasants by stating that “we are all labourers here” and demonstrated remarkable bravery and the taint of counter-revolutionary by voting against the expulsion of kulaks. On one occasion they demonstrated with rakes and pitchforks and installed peasants in their own homes while demanding the liquidation of the collective farm and refusing to destroy a kulak home. When a priest sermonized on the end of the world because the Antichrist had come to earth, and announced that the next day would be his last sermon, he was arrested as he foresaw, and a large demonstration of peasants appeared to denounce vociferously the proceedings.

While men, who resisted collectivization, were stigmatized as kulaks and counter-revolutionaries, faced execution, deportation or a slow death in the camps of the Gulag, women paradoxically experienced greater freedom to protest. Although the increased status of women during the Revolutionary era and early 1920s was gradually superseded by the traditional gender roles, there were paradoxically ideological impulses that actually benefited women. As Marxists who filtered reality through the prism of class and denied that gender was a political agency, the authorities stereotyped and infantilized peasant women as superstitious, irrational, and no more than unruly children who were incapable of being responsible for their actions. Since the authorities denuded them of any class attributes, women were considered to be classless and without political consciousness which fuelled the rumour that “(they the authorities) will not touch the women.”

Peasant women took advantage of the stereotype to protest what was important to them—church closings, deportation of kulaks and the intimidation to enter a collective, which would threaten their control over the domestic economy—without having to worry about the harsh retribution that would inevitably accrue to the men. Because of the leadership roles that they undertook, they were more likely to be portrayed as acting like “dusky beasts” rather than counter-revolutionaries that needed to be “educated” rather than punished. As irrational creatures, babas or peasant women was not perceived as “the fairer sex but as the darker sector of the already dark peasant masses.” Ironically, this pejorative designation assisted them in standing up to, and intimidating and sometimes beating up, officials and village activists through their shouts and curses and by leading demonstrations when the men stood back. Sometimes women would appear at demonstrations armed with pitchforks or with children in their arms and in one village the word was that a nursing or pregnant woman could act without culpability. Years later in the 1950s a former peasant soldier told a Harvard researcher: “The women played an active role against the collective farm. The men were in general passive. The women’s role especially in the central areas was to work the land and take care of the house. There was more or less a matriarchy here. The men left for the city to work for wages.…The women told the men what to do.” These reflections further underscore the paradox of the emotional power that women exercised in rural society which traditionally expected women to be subservient to their husbands.

At some level, the Communist Party grasped the formidable presence of women and sought to co-opt this power through their posters. From 1930 artists churned out in unprecedented numbers a large production of posters of young, slim, attractive women, who extolled the virtues of collectivization. These attributes of youth and fitness directly related to their labour function. The large number printed attested to the importance that the authorities placed upon this theme. Women were seen confidently riding on tractors, escorting a horse and cow into a collective (to counteract the slaughter of animals) and as larger than life dressed completely in red with a rake resisting the blandishments of class enemies, priests and kulaks. It did not matter that this was not a realistic representation since red was a privileged colour in both religious and Bolshevik art and conferred sacred status on the person or object. Nor was it important that these posters were a reflection of real life. Like so much Soviet art and official pronouncements, it was a statement of what life should be and the purpose of these posters was to provide an incentive for that transformation.
Posted by Robert A. Douglas at 08:27