I originally wrote a chapter on the 1920s that was to be included in the Soviet section in That Line of Darkness: The Gothic from Lenin to bin Laden (Encompass Editions, 2013) but for reasons of space it was excluded from the published book. I have used this space to disclose several of its vignettes. The following is one of them. 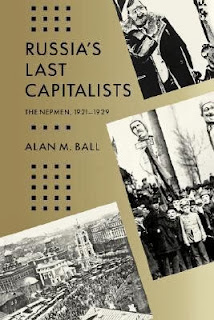 The New Economic Policy known as NEP was conceived not only to pacify the peasantry but also to resuscitate a prostrate economy in the cities. Lenin realized legalization of private trading in the countryside would be ineffective and the peasantry would not part with their extra surplus unless they could buy (or more likely barter for) the boots, nails and hand ploughs available in the cities. Since the Civil War largely precluded the state’s manufacture and distribution of basic consumer goods, Lenin turned to material incentives to encourage individuals to re-establish workshops and small firms that would manufacture and sell products. NEP was an attempt to unclog the economic circuits between urban and rural areas through a combination of state socialism and private market forces that allowed the peasantry freedom to sell to the state, cooperatives or individuals. The key industries—fuel, foreign trade, banking, and war industries—remained under centralized control. As other state industries became decentralized, they were not only required to operate commercially and sell to the highest bidder but they also did not need to meet a state production quota.

In this mixed economy, the space available for private initiative was filled by the so-called Nepmen, those large-scale urban traders, financiers, manufacturers, merchants, artisans and petty vendors, who flooded the market with formerly scarce goods like butter, cheese and fruit. The population of Moscow doubled during the period of the NEP. Cafes, restaurants and even nightclubs opened after having been boarded up during the bleak, lean years of War Communism. The most quintessential form of economic activity during the 1920s were the entrepreneurial private traders (bagmen) from the cities that fanned out by rail into the countryside to barter for vegetables, ceramic pots and knitted scarves. As the bagmen expanded their activities, they sold to urban shops while purchasing chairs, nails and hand tools and turned the War Communism greyness and austerity of cities like Moscow into bustling beehives of vibrancy. By 1928, when Stalin repudiated the NEP with its uneasy hybrid of market forces and state controls, the economy may not have recovered to a 1913 level, but it was impressive enough to demonstrate solid growth.

Undoubtedly, the quasi-market economy of the NEP restored life to urban centers but the benefits for some alienated others who believed that the original impulses of the October Revolution had been betrayed. For those who had supported the socialist ideals of equality, that included state support for social programs that would transform the lives of men, women and children, the NEP was a bitter retreat. Despite economic stabilization, the reappearance of delicacies and luxury goods in the stores and the relative freedom of the New Economic Policy, the decade of the 1920s exposed the anxieties of the ideological purists who viewed the transitional period to socialism as a tarnished retreat from a social transformation. Male and female Party activists wondered whether the troubling compromise of NEP, which they dubbed the New Exploitation of the Proletariat, was really necessary if the price was the sacrifice of the egalitarian goals of the revolution. Those who believed that NEP was “a pact with the devil” and a betrayal of the socialist dream were frequently the same people who believed the traditional family, the home and the inner world of the individual posed obstacles to their ideological goals. The NEP era created a paradox wherein a thriving entrepreneurial business spirit, sui generis in Soviet history, operated in conjunction with unprecedented reduction of private personal space (that I explored in an earlier blog).

The profit motive inherent in the personal enrichment though increased prices and the private trade in luxuries that satisfied a minority of tastes, juxtaposed against hunger, appalling poverty and severe cutback in social services, antagonized the younger, more idealistic Party members. They despised the NEP as a capitalist microbe that could infect the proletarian idealism for the Revolution and corrupt Bolshevik ideology. They feared that the power of the new bourgeoisie, the get-rich-quick Nepmen would challenge the legitimacy of the proletarians as a ruling class and permit history to repeat itself instead of fulfilling the Marxist trajectory of moving relentlessly ahead. Lenin’s belief that an alliance through the cooperatives could be established between the peasantry and the working class in which the peasantry could acquire life’s necessities in return for their grain became in reality a connection between the peasantry and the private traders that appeared to marginalize the state as an economic partner and enraged and disillusioned the urban workers who were the primary base support for the Bolsheviks.

Proletarian anger and frustration were directed toward the peasants, who were getting richer from higher food prices, and the private entrepreneurs, both of whom had benefited from privatization. Hostility toward the Nepmen stemmed from a common impression about their opulent lifestyle and their establishment of bourgeois entertainment. Even though a less vitriolic language and a softer tone were deployed during the 1920s to criticize opponents rather than vilify class enemies, Soviet propaganda and cartoons caricatured bagmen as crass opportunists flaunting their wealth by opening race tracks, nightclubs, brothels and casinos, places where alcohol, cocaine and women could be served to the parvenus, supposedly relics of the capitalist past, while they drove imported cars and their women sported jewels and fur coats. Given these wildly-distorted perceptions, it did not take much to inflame plebeian resentment. When in 1923 a shortage of goods and rising prices occurred, the anger was only contained when the Moscow Soviets closed down 300,000 private businesses and imposed a special tax on the businesses that remained.

Since some of the most successful of these Nepmen were Jews and they were particularly visible in the major cities, the perception emerged that they were the real beneficiaries of the Revolution.  In one sense, the “children of 1917” were correct since Jews associated pogroms with the atavistic past and they supported the Revolution’s internationalism, its promise to eradicate all national prejudice and provide them with access to the educational and professional opportunities offered by the modern city. During the 1920s Jews did thrive; the restrictions they experienced were more a result of their social class and connection with private trade than with their ethnicity.

Nonetheless, the grotesquely satirical representation of Nepmen in the arts did feed into anti-Semitic sentiments and more generally the perception that the neo-capitalists were exploitative hedonists. During the 1920s, the Party permitted a degree of experimentation in the arts in the belief that it could be harnessed to assist in the development of the new Soviet man. But the artists’ relative freedom was also employed to buttress traditional attitudes. Although anti-Semitism officially was ideologically unacceptable, the portrayal of Nepmen in movies, literature, posters, and cartoons, encouraged a negative and stereotypical view of them as greedy, unscrupulous traders enriching themselves at the country’s expense. It was a Soviet comic’s adeptness at employing parody that added the word Nepman to the Russian language when he performed the Nepman in one of his routines. One contemporary critic argued that since the days of the Nepmen were numbered, all he could do was to become a “pleasure machine…merciless to others, who sees the rest of humanity as no more than an instrument for his own pleasure.” Hedonism often equated sexual excess with gastronomic indulgence, and films would often suggest this connection when they portrayed Nepmen and Nepwomen gorging themselves on rich foods while the camera panned from the male double chin to ample female breasts or naked thigh. Posters depicting them as “bloated rapacious exploiters” would show them “stroll[ing] along the alleys with self-important expressions in the company of their overfed, incredibly well groomed wives, dressed to kill.” On one level, caricatured representations worked effectively because of their affinity with pre-revolutionary propaganda, but they did not eliminate the public’s interest in what the Nepmen could offer.
In their dissatisfaction, citizens found in Nepmen a convenient and politically acceptable scapegoat that included the entrepreneurial foreigners whose expertise and capital equipment was needed to stimulate a near moribund economy. For all their animosity toward the Nepmen, the Soviet consumer, like the Bolshevik leadership, was ambivalent about the economic and cultural services they offered. Even though prices from state stores were lower, consumers patronized the private traders because the latter could offer them material advantages over the former. Private shops provided an accessible ambiance: they did not have to stand in line they could examine before choosing a better quality of goods and had access to consumer credit. Moreover, ordinary people enjoyed the gypsy music, jazz and old movies from the tsarist past that the Nepmen provided. Soviet filmmakers had wanted to educate the public politically with revolutionary spectacles that an avant-garde artist like Eisenstein could create. But the public vastly preferred to be entertained with American films featuring the phenomenally popular Douglas Fairbanks.

The Soviet leadership realized that NEP and foreign economic investment and services were temporarily essential, but they suspected that these services could seduce ordinary citizens and officials desperate for economic improvement and pleasure. Perhaps what disturbed the ideologues most was that this mingling of the proletarian with the bourgeoisie demonstrated that class differences were not as significant as their ideological messages had proclaimed; the proletarians liked what the bourgeoisie could offer. If commercial and social exchanges—Soviet officials, the old intelligentsia and Nepmen mingled in café society—were dissolving distinctions, it became imperative to insist on their enemy’s otherness. Continued contact could contaminate the proletarian stalwarts. Ironically, Bolshevik idealists shared the values of their bourgeois counterparts in Western Europe when they ascribed to the danger of degeneration, that certain bourgeois values could be inherited thus sapping revolutionary dedication. Whatever weaknesses or desires that percolated within the person were to be disowned, considered alien and had to be purged by projecting those impulses onto their class enemies, their double.